The Dodgers and Angels both are beset by ineffective relief pitching. But that does not make them unusual among the big league contenders in this year of the injured relief closer. 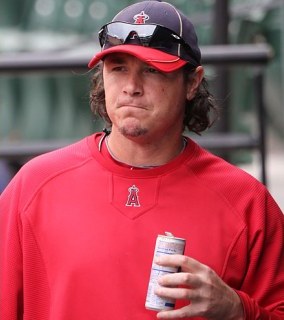 Many teeth are gnashing locally about the state of relief pitching.

The Angels have the worst bullpen in the American League through May 7, charting a 4.75 ERA. The league average for relief pitching is 3.52.

The Dodgers have the fourth worst bullpen in the National League with an ERA of 4.23. The league average for a bullpen is 3.74.

The two teams are going at the problem in contrasting ways. The Angels, who are clearly the worse off, have switched to veteran setup lefty Scott Downs, 36, as their closer. Downs hasn't allowed a run in 9.2 innings this season, but getting the game to him is the hard part. Relievers Hisanori Takahashi, Kevin Jepsen, David Carpenter, Jordan Walden and Rich Thompson all have been spectacular in their ineffectiveness this season.

The Angels even are resorting to 39-year-old Jason Isringhausen, who they signed to a minor league free agent contract in late February. Isringhausen once was a great reliever in the same sense that the rest of us once were teenagers -- it was some time ago. But Isringhausen is the Angels' best hope right now to become a closer so Downs can return to his equally important setup role. They just don't have anyone else right now who can do it.

The Dodgers still think they can straighten out closer Javy Guerra, who has struggled this year with a 5.84 ERA and three blown saves in 11 opportunities. For the time being, though, it's going to be Kenley Jansen, who has hit on two of three save chances.

It has been noted that the Dodgers took five of their ten losses through in the bullpen, which allowed runs in the ninth or extra innings. But that's putting a bit too much on the bullpen. In four of the five losses generally pinned to relievers, the Dodgers scored three or fewer runs. In one of them, the bullpen didn't even blow a lead, though it lost a tie.

However you slice it, the five losses put on the bullpen include four games in which the club allowed four runs or fewer in nine or 11 innings. Frustrating as it is to lose after late runs by the opposition, those losses are every bit as accountable to a lack of offense. The Dodgers just don’t very often get far ahead of people and they often struggle to score late in close games. They still lead the NL West with a 19-10 record.

A striking fact about the 2012 season is that presumptive contenders are almost all weak in the bullpen. Among teams that were supposed to compete for playoff bids this season, only Texas, Cincinnati, the New York Yankees and St. Louis have better bullpen ERAs than the Dodgers. Clubs like Detroit, Toronto, Boston, Tampa Bay, Milwaukee, the Angels and Philadelphia would all be happier right now if they had the Dodgers bullpen.

And, in this year of the injured closer, the Yankees may not be long for the top of the list. They lost Mariano Rivera for the season last week with a torn anterior cruciate ligament.

Baltimore holds a surprising lead in the AL East, largely because it has the best bullpen ERA in the game at 1.54. But that won't last. Orioles manager Buck Showalter has leaned heavily on his relievers, calling on them so far for 99.2 innings, about 3.1 innings per game. Only Boston, Colorado and Kansas City have used their bullpens more. Average bullpen use across the major leagues is 88 innings.

Texas, with a 2.02 ERA for relievers, has the soundest bullpen, by far, across the game -- and that's after moving former closer Neftali Feliz to the starting rotation. Bringing in Joe Nathan from Minnesota as the closer, the cutter-happy Rangers haven't skipped a beat. With a 3.09 ERA, in fact, Nathan has been the Rangers' least effective reliever, behind setup men Alexi Ogando, Robbie Ross, Mike Adams and Koji Uehara, all of whom flash ERAs of 2.31 or less.

The Reds, who lead the NL in bullpen ERA at 2.34, have proved to be the most resilient club at solving bullpen misfortunes. After letting Coco Cordero go as a free agent during the winter, they signed Ryan Madsen as a free agent from Philadelphia for one year at $10 million. Madsen didn't even pitch in a spring training game before injuring himself for the season. Replacement closer Sean Marshall has taken a couple beatings in that role. However, setup relievers Aroldis Chapman, Logan Ondrusek and Jose Arredondo have been virtually unhittable, allowing a combined 19 hits in 40.2 innings.

On the down side, we look to Philadelphia, which signed Jonathan Papelbon to a big contract as their closer during the winter. Papelbon has been fine, saving nine games, though his ERA of 3.00 is on the high side for a closer. However, getting the game from their starters to Papelbon through an assortment of lesser lights has been difficult. The Phillies have the game's worst bullpen ERA at 4.86.

Miami signed Heath Bell from San Diego to a big splash during the winter. Now, the Marlins have removed Bell as their closer. Bell has walked 10 batters and allowed 15 hits in 8.2 innings, ringing up an 11.42 ernie. The Marlins’ new man of the hour is the immortal Edward Mujica, who has two saves. The remainder of the Marlins bullpen has been effective. The Marlins bullpen ERA of 3.45 is fifth in the NL.

Between the Reds and Marlins on the list of leading bullpen ERAs in the NL are Pittsburgh, San Diego and Houston, none of which has a winning record overall.

On the AL side, we see Baltimore, Texas and the Yankees (2.31) on top of the list for bullpen ERA. For reasons already discussed, Baltimore and the Yankees are headed for trouble. Following them are Oakland, the Chicago White Sox, Seattle, Kansas City and Minnesota. Of those clubs, only the White Sox have a whiff of a chance for the postseason, and that's because Detroit and Cleveland are really struggling to notch outs with their relievers.

The point here is that if you have a contending club and your bullpen isn't everything you'd like it to be, you're not at a huge competitive disadvantage right now, relative to the other better clubs.

The good news for the Dodgers, even though their bullpen is a half-run worse than league average, is that Guerra and Jansen have the stuff to be good, if they can work out an approach. They have the arms.

The good news for the Angels is that their starting pitchers are so good that they don't need a lot of bullpen. Manager Mike Scioscia has used his relievers for only 60.2 innings so far, 10 innings less than any other club in baseball. That makes the Angels the hottest candidate to spring for a closer who can put them over the top at the trade deadline.

Then again, what would that accomplish? Other clubs trying that approach during the winter are having regrets. Bell has flopped in Miami, Boston traded with Oakland for Andrew Bailey and he is out for the year, the Reds signed Madsen and he was gone early. Toronto signed Sergio Santos from the White Sox as their closer. Now, he's back in Dunedin, rehabbing a groin injury. Other disabled closers across the game right now are Drew Storen in Washington, Brian Wilson in San Francisco, Joakim Soria in Kansas City and Kyle Farnsworth in Tampa Bay.

Just as paying big for a closer is no guarantee of success, it seems that struggling in the bullpen is not a deal breaker this year. Could lead to a lot of wild late innings between contenders. And a big haul at the trade deadline for some lucky loser like Seattle (where the closer is Brandon League), Houston (Brett Myers) or Pittsburgh (Joel Hanrahan).

Baseball games aren't won or lost late. But they are often decided late. Relief pitching is shaping up as a huge challenge for any club aspiring to the playoffs, except for Texas, which is the only club across the game that clearly has it licked.
at May 08, 2012