Dodgers take shot in the dark with Ramirez

The Dodgers have made one of those big moves they promised, dealing with the Miami Marlins to bring in former MVP candidate Hanley Ramirez to play shortstop and third base. But unless the Dodgers can point Ramirez in the right direction, they have a player who, at 28, is on the down side of his career. 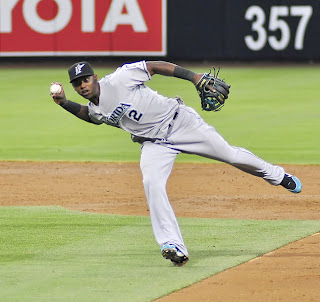 Hanley Ramirez is a big name with a big contract, but he hasn't been a big player for two years. The Dodgers made a big move to acquire Ramirez Wednesday, took a big chance.

Could be a big score. Or a big mistake.

As they've promised, the Dodgers made a bold move by dealing rookie pitcher Nathan Eovaldi and Class A minor league pitcher Scott McGough to Miami for Ramirez and left-handed reliever Randy Choate. The Dodgers also remain in play for Chicago Cubs pitcher Ryan Dempster, the National League ERA leader at 2.11. Now that the Dodgers have traded Eovaldi, who was a very effective (and unlucky) 1-6 and 4.15, they definitely need a pitcher to fill the big hole they just put in their rotation.

Ramirez is only 28 years old, but the bubble gum card, right now, says he's a has been to whom the Dodgers owe $40 million through 2014.

The talent is unmistakable. The achievements are right there on the record. Hanley Ramirez, at the top of his game, is an MVP player. From 2007 through 2009, there was no better offensive player in the National League than Ramirez, who averaged 29 homers, 37 steals and tacked up OPS readings of .948, .940 and .954 in those three years.

But there seem to be impediments to Ramirez reaching those levels of late.

In 2010, his manager, Fredi Gonzalez, benched him for lazy play. In 2011, the Marlins tried another manager, Jack McKeon, whose first act was to bench Ramirez for being late to the new manager's first meeting. Now, in 2012, another new manager, Ozzie Guillen, trades Hanley Ramirez.

The deal really is the work of Marlins general manager Larry Beinfest, of course, but you know that if Guillen wants Ramirez around, he's still around. But he isn't. Now Ramirez becomes a problem for the Dodgers.

The Dodgers, of course, traded for Ramirez believing he will be a solution on the left side of their infield, where shortstop Dee Gordon is injured and no one has taken ownership of third base. Presumably, Ramirez plays short until Gordon returns, then takes over third base.

The Dodgers did not obviously make themselves better with this trade, which can't be considered a cinch pennant move. It is a shot in the dark. If the change of scenery brings back the Ramirez who once was the best offensive player in the NL, then they have struck gold. Otherwise, they've got a flop on the field and a very unhappy situation in their clubhouse. That makes this trade not just a huge test for Ramirez, but especially for the Dodgers' clubhouse leadership.

Don Mattingly is the manager of this team. See how he handles a case like Ramirez, whose last three managers have shown him the pine, or worse.

Matt Kemp is said to be the leader of this team. See how he handles a tough case like Ramirez. Prima donnas like Ramirez have prospered in the right clubhouses. One remembers Deion Sanders in Cincinnati, straightening up for new Hall of Famer Barry Larkin for a while, or Carl Everett in Houston, where likely Hall of Famers Jeff Bagwell and Craig Biggio kept his focus on the field. It's part of the job for the great team leaders.

The acquisition of Hanley Ramirez is an exciting development for the Dodgers, not because he guarantees prosperity, but because it breathes life into a season that has lost its energy. The Dodgers have too many half-time players in their mid-30s playing full time. When the season was young and the players were fresh, we loved their wiles and presence of mind. If it's May and you're a step slow, smarts and experience can make it up. If it's July and you're two steps slow, then smarts and experience will make up for one, but not both. That’s what we’re seeing, night in and night out, from the Dodgers.