It's been wrong to think there was such a time as "The Steroid Era," and that it has ended. It hasn't, and it never will. What has ended is every player who does it getting away with it. So, we shouldn't be too surprised by stories like Melky Cabrera and Bartolo Colon. The money in baseball will always make PEDs tempting to players with nothing to lose. 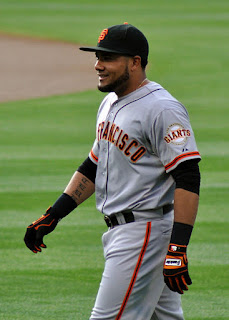 Another pennant-race baseball player has gone down to the drug tester, and now people are really mad.

This time, it's Oakland Athletics right hander Bartolo Colon, who has been clinging to his big league career since winning a Cy Young for the Angels in 2005.

That was back when he could command real money. The Angels signed Colon in 2004 for four years at $51 million. Sadly, for the Angels, $30 million went to Colon’s dreadful seasons in 2006 and 2007. Since then, Colon has scavenged, year-by-year, for a million, if he could get it.

In 2010, he couldn't even get a contract. Instead, he was having fat and bone marrow stem cells injected into his right elbow and shoulder, an "innovative and unproven technique," as the Associated Press put it. In 2011, Colon settled for $900,000 from the New York Yankees. He turned into a nice surprise, throwing a 4.00 earnie with 26 starts and making hitters miss. He went back on the market this season, age 39, and drew $2 million from the Oakland A's, his best pay day in five years.

Colon has a 3.43 ERA for the A's, and he was on his way to surpassing 200 innings. He was just about the pitcher he used to be. Turns out, he had a little more help. Elevated levels of testosterone. Now, he's out for 50 games after failing the big league drug test, meaning he will be no help to the A's in their unexpected playoff chase. It also means the better contract Colon could have expected for 2013 is off the table and he's pitching next year for the minimum, if at all.

Never been a big fan of the steroids in baseball here. At this point, given ongoing enhancements in laboratory techniques, it's a cultural fight to keep the game in human proportions while everything else around us loses that quaint enchantment.

But it's also very hard to blame Bartolo Colon for the choice he made. This guy is trying everything to hang onto his big league career and earning power. Many others will do the same.

In light of Colon's suspension, along with that of San Francisco Giants outfielder Melky Cabrera last week, one hears much puzzling disappointment from fans and commentators, who bemoan that "The Steroid Era," isn't truly over, as so little seems to have changed.

Of course, the very idea of a "steroid era" was naive on the face of it, because it suggests closure. No wonder people are disappointed. But they should never have expected that performance enhancing drugs (PEDs) are ever going away. The forces behind them are too great. All we can ask is that the game address the matter seriously, and that is happening.

Even in these new days of testing, though, so much money is at stake for these players that someone will always take the risk, even if we imposed a lifetime ban for a first offense. For a fading player in his late 30s, the remainder of his career could be worth $25 million or more with a little boost, or it could be worth nothing without it. You might raise moral issues or health questions at this point, but the economic side says you have nothing to lose and quite a lot to gain.

Like Colon, Cabrera's circumstances and output all but predicted his outcome. Cabrera is young and already a journeyman, playing on his fourth major league club at age 27. He's a singles hitter, and various reports suggest that his approach hasn't always been sharp. Given repeated opportunities to catch on in the everyday outfield with the New York Yankees, for whom he debuted at 21 in 2006, he couldn't do it.

The Yankees unloaded Cabrera to Atlanta after winning the 2009 World Series. Cabrera had enough value to fetch Boone Logan, a fixture in the Yankees bullpen for the last three years, and Javier Vazquez, who tanked right away. But Cabrera was such a dud in Atlanta that the Braves cut their losses and let him go, rather than risk an outrageous call by an arbiter. For $3.1 million in 2010, Cabrera gave the Braves a .671 OPS and minus-5 WAR. In 458 at-bats, only 34 extra-base hits, including four homers.

Cut loose, Cabrera signed with Kansas City for a lot less, $1.25 million. We began hearing, suddenly, that Cabrera was dedicated. The Royals ran him out there every day and he put up a pretty nice 2011 season -- 102 runs, 201 hits, 18 homers, 20 steals, .305 average. Top ten across the American League the first two, as well as at-bats, plate appearances, total bases, singles and doubles.

The San Francisco Giants were enticed. The Royals, lacking surplus thunder, let Cabrera go for Jonathan Sanchez, a No. 4 starter maybe past his best at 29, and Ryan Verdugo, a stock left-hander for the high minors.

A storybook season 2012 was for the Melkman, who settled into the Giants' three hole and delivered hit after hit, 159 of them, which still leads the National League a week after his suspension. When he was suspended, Cabrera also led the league with 84 runs.

Cabrera drew his first spot on an All-Star team, going two-for-three with two runs, two RBI and a homer for the National Leaguers. He won the All-Star Game MVP, along with recognition as a driving force behind the Giants' surge in the NL West. Cabrera and the Giants reportedly were discussing a contract in the area of three years and $27 million.

Now the music has stopped, and at least one drunk has suggested that Melky Cabrera be deported. But do we really blame Cabrera for his calculation? Praising him is out of the question. What about blaming him? He was hanging onto the very last rung of the ladder -- $1.25 million to play for the Kansas City Royals, the team you play for when you can't play for anyone else. He was all but finished. And if he could have dodged the piss man one more time, he was turning that into a $27 million contract with a contender.

The future for Cabrera may be uncertain now, but it is likely that he made about $4 million this year that he wouldn't have made without amping his testosterone. Cabrera and Colon both showed marked improvement the year before being busted, then improved even more just as they were being found out. One surmises, in each case, that the training program in question had been in place for more than a year before the time came.

Dr. Bryan Smith, who administers the joint drug testing program for Major League Baseball and the players union, reported giving almost exactly 3,600 drug tests during each of the 2009 and 2010 seasons. That's 120 tests per team per year, which enough to test each spot on a 25-man roster 4.8 times. Those 7,210 tests in two years resulted in six 50-game PED suspensions, way less than one per 1,000 tests. Players have to be beating this test.

This year's bust list is up to five, up from two in each of the previous two years. Still, no one sensibly believes that only five players in the major leagues are using PEDs. Inevitably, the testing will miss people as the chemists stay ahead of the enforcers.

A lot has changed, though, and that change is important. Back in the Wild West, before there was law and order about steroids, players had to make choices that we don't think players should have to make. The player who didn't want to risk his body with steroids really risked falling behind in his career, because there was no such thing as getting caught.

Now, there is getting caught, and the cost of getting caught is very steep -- a 50-game unpaid suspension for a first offense and, consequently, a severe loss of bargaining power. Maybe the penalty could be steeper, but no penalty will be steep enough to eliminate all the scenarios in which a player has nothing to lose and much to gain.

Now, though, the juicers are on the defensive. Have no doubt, here and there, juicers are still winning. But they can and do lose, witness Cabrera and Colon. Then again, for Cabrera and Colon, who already had nothing to lose, we shouldn't be surprised if that didn't matter very much.