Angels out, Dodgers still in -- for now

We've come to the time of year when we consider the tiny difference between going to the playoffs and missing them, especially in Los Angeles, where the Angels died Monday and the Dodgers barely stayed alive. Both clubs are so close that big turning points won't explain how they missed. The explanations are tinier. 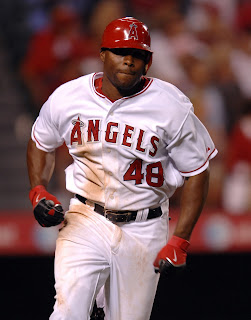 Now, the Angels are winding down their season. Torii Hunter, 48, becomes a free agent when it ends (photo courtesy of Angels Baseball).

So, the baseball season in Los Angeles, half of it, anyway, lives for another day.

That life belongs to the Dodgers, who squeezed out a 3-2 win in the bottom of the ninth against San Francisco Monday night to remain two games behind the St. Louis Cardinals, who held their ground on the second wild card by beating Cincinnati Monday.

Two games out, two to go. Given the scenario in spring training, Dodgers fans would have loved it. But the fans aren't responding to this team, because the team didn't respond to its opportunity when ownership dropped $300 million on players while the Dodgers still were close to the NL West lead. Only 33,000 showed at Dodger Stadium Monday night with the Giants in town and the playoffs within reach.

Suddenly, though, the Dodgers have won six straight. Too little, too late, and too bad, because this is a representative team right now, going 6-5 in the last couple weeks against teams positioned for the playoffs. The Dodgers would be very competitive in the playoffs, playing like they're playing against the best clubs in the NL.

Their problem isn't the contenders. It's the pretenders, the Arizonas and Colorados of the world. The Dodgers are 6-12 this year against Arizona, and 10-8 against last-place Colorado. Just looking at that, the Dodgers should be five games better.

The Angels are an excellent example. They were eliminated Monday night when Oakland beat Texas. One almost aches for a 91-win team that misses the playoffs, which is how the Angels end if they finish it out with two wins in Seattle Tuesday and Wednesday.

There's always a tendency to seek big turning points for a club like the Angels. Two easily come to mind. They started 18-25, which really isn't such a disaster. The real trouble started on Aug. 1, in Arlington, after the Angels won the first two games of a series there to climb within two games of the Rangers for the AL West lead.

But on Aug. 1, the Angels blew a 7-1 lead in the fifth inning at Texas, which rallied for an 11-10 win in 10 innings. The next day, the series ended with the Rangers winning again, pushing the Angels back to four games out of the lead.

And then, the wheels came off of the season. The Angels lost two of three at Chicago, then two of three at Oakland, then they were swept four games at home by Tampa Bay, dropping the Angels to 62-60 overall.

The Angels have rallied. Since the Tampa Bay sweep, the Angels are 27-11. But that hasn't dug them out of the hole they made by losing 13 of 18 after climbing within two games of the Rangers.

All that said, big turning points will not explain how the Angels missed the playoffs, and that's going to drive them crazy this winter. The Angels will miss the playoffs by a slender margin, and that's because of some small turning point, somewhere, that cost them a ball game. There actually are several of these.

Think of all the discrete events in a baseball game, the tiniest little moments. Each game has hundreds of them, call it about 1,500. The pitch is one, the batter hitting the ball to right field is another, the right fielder taking the ball cleanly is a third, the right fielder making a throw on the runner going to third is four, the third baseman taking the throw is five, the tag play gets us to six. So, six discrete events, as we'll call them, on a simple single to right with a runner on first.

The 71 Angels losses so far contain, between them, well more than 100,000 of these discrete events, enough of which went wrong for the Angels. It doesn't have to be much. Maybe the manager left a pitcher in for one hitter too many, maybe the club blew a relay, maybe a runner was too greedy on the base paths, maybe a batter missed his pitch in some at-bat. Very small things.

That's what's agonizing about the Angels right now. They're done. Missed it by that much.

Chances are, we’ll be thinking the very same about the Dodgers, very soon.
at October 02, 2012