Baseball is a game of tragedy and absurdity. Friday's one-game wild card round of playoffs showed us both. Absurdly, the Atlanta Braves booted their way out of the postseason and later complained, with justification, that they were robbed. For tragedy, we give you Josh Hamilton and the Texas Rangers. 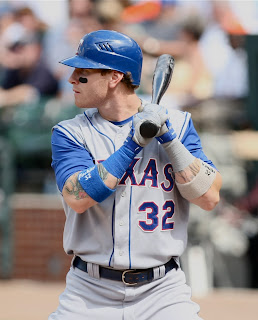 Baseball is based in failure, which is why it never fails to arouse a sense of the tragic.

Our newest dramatic tragedy in the game is the Texas Rangers, a better than average team -- nay, the best in the American League! -- brought down by its flaws, none more compelling than center fielder Josh Hamilton, a tragedy unto himself.

Baseball also is a theater of the absurd, though a play written not by Beckett or Albee, but by the writers of the infield fly rule, who, in their defense, wished only to quell one of the game's intrinsic absurdities -- the base runner who is at once forced and not forced.

Sometimes, we don't, and so absurdity piles upon absurdity, until the players who have earned nothing through their feeble antics are complaining, legitimately, that they wuz screwed.

But the ludicrous plays favorites, too, so as one side winces, the other smiles, working happily along the lines of absurdity, finessing them for victory. That happens to be the calling card of the St. Louis Cardinals, the last team in last year's playoffs before winning the World Series, and the last team in this year's playoffs before winning their twisted National League wild card game in Atlanta Friday night.

The baseball postseason has begun. The solid, hard-won realities of the long run no longer hold. Tragedy and absurdity live here, in the time line of the short series.

The Braves attempted a comeback in the eighth. With one out and runners at first and second, Simmons hit a drifting pop up into short left field. The Cardinals shortstop, Pete Kozma, followed the ball going back, while left fielder Matt Holliday approached the ball coming in. The ball stayed in the air for a long time. The runners were frozen.

Finally, just as the ball was coming down, left field line umpire Tim Holbrook called the infield fly rule. At that moment, it appeared, Kozma and Holliday both gave up on the ball and it fell between them. The runners both advanced. However, had Holbrook not called for the infield fly rule, Simmons would have been safe at first, assuming the Cardinals fielders wouldn't have played the ball differently. With the call, though, Simmons was automatically out.

Atlanta manager Fredi Gonzalez came out to argue. Outraged fans pelted the field with garbage. The game was delayed for a little more than 20 minutes. The Braves wound up protesting the game.

But the commissioner's office denied the protest. So, the Braves may protest injustice, but their complaints ring hollow because of their own incompetence. The Cardinals advance to play against NL top seed Washington, not necessarily deserving to win. However, the Braves deserved to lose and the Cardinals took advantage, which is good enough to win.

Friday's American League wild card winner, the Baltimore Orioles, really were onlookers with the rest of us as a fine Texas Rangers operation that just never got it done completed its autumn unraveling.

The Rangers won AL pennants in 2010 and 2011 without winning the World Series. They had it won in Game 6 last year, but right fielder Nelson Cruz couldn't make the championship catch on a two-out fly ball in the ninth by the Cardinals' David Freese, who cleared the bases with a triple to tie the game and keep the Cardinals alive.

Being that close and missing, the Rangers came to this season hungry and held first place in the AL West for 178 days. They held a five game lead on the Oakland Athletics with nine games left. But the Rangers lost seven of those games.

On the last day of the season, with the Rangers and Athletics tied for first place and playing each other in Oakland, the Rangers took a 5-1 lead in the third inning. Playing an Oakland club with nothing to lose, the Rangers celebrated in their dugout. It would be the last happy moment, capping three years of happy moments, for the club that couldn’t ever get it all the way done.

In the fourth, the A's tied it, 5-5. Later in the inning, Hamilton blew a fly ball in center field, allowing in two more runs. The A's were on their way to a 12-5 win and the division title. Suddenly, the Rangers were relegated to wild card status facing a one-and-done mandate, predicting an ill future for a club playing badly. The Rangers would take it up in their own park against this year’s four-leaf clover of a baseball team, the Orioles, the break-even club that broke through by winning 29 of 38 one-run games.

There, it all came back to that beautiful, haunted athlete.

The Tampa Bay Rays (the Devil Rays, then) certainly understood the talent when they took 18-year-old Josh Hamilton from Raleigh, NC, with the first overall pick in 1999. But serious drug problems ruined his early twenties. At 22, he was out of the game.

Just for kicks, apparently, the Chicago Cubs took Hamilton from Tampa Bay in the 2006 Rule 5 Draft. That day, the Cincinnati Reds purchased Hamilton from the Cubs. The Reds paired Hamilton with a sobriety coach, the brother of manager Jerry Narron, and the world discovered that year the talent that had been forgotten.

And when the Reds moved Hamilton to Texas in a trade for right hander Edinson Volquez a year later, a superstar was born, and a two-time pennant winner in Texas came with him. In 2008, Hamilton mesmerized baseball fans with 28 bombs in the first round of the home run derby at Yankee Stadium. In 2010, Hamilton batted .359 and won the AL MVP.  Even this year, he struck his career high with 43 homers. He even stayed off the disabled list for the first time since 2008.

But Hamilton relapsed last winter, and the clock thus began on his time with the Rangers, with whom his contract was to expire after this season. Hamilton is said to be disturbed by an incident earlier this year, when he tossed a ball up to the stands and a fan plunged to his death trying to catch it. Anyone would be disturbed.

This is a fellow with a substance abuse problem who now had blood on his hands, albeit unintentionally.

With his relapse, Hamilton already was on a short leash. By the All-Star break, he wasn't producing as we have seen, though he was named to the AL All-Star team. At the start of August, the Rangers and Hamilton suspended contract negotiations. Hamilton reportedly began having vision and sinus problems. And the Rangers faltered. From Sept. 1, they were 15-16 until the end of the season.

Then came the debacle in Oakland, followed by a testy exchange in the dugout between Hamilton and Rangers manager Ron Washington. Sometime around then, a Rangers official told Fort Worth Star-Telegram columnist Randy Galloway that Hamilton isn't coming back to the Rangers even if he plays for free.

So, Hamilton went to the wild card game against Baltimore with a lot on the line. He lost all of it.

Batting in the first, Rangers down, 1-0, runners on first and third with no outs, Hamilton hit into a double play on the first pitch. A run scored to tie the game, but the big inning was dead. Hamilton batted again in the third with a runner on first and two out, game still tied. He struck out, looking at the third pitch. Hamilton led off the sixth with a first-pitch ground out to the pitcher.

Hamilton had one more chance, coming up in the eighth with two out, the Rangers down, 3-1, and Ian Kinsler at second base. The Orioles brought in lefty Brian Matusz. And Hamilton whiffed on three pitches, going for the tying run and neglecting to cut down his swing with two strikes.

Now, and awfully suddenly, Hamilton is a pariah where he once was a hero. He doesn't have a major league contract. He will be 32 next year. He'll sign somewhere, but not for anything near what his talent dictates. He has a substance abuse problem. And he has a man's death on his head.