The Major League Baseball Players Association was almost nothing before Marvin Miller came along. Miller died last week, long after building the baseball players union into the strongest in America. 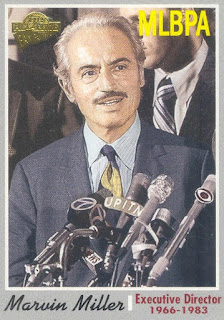 The words that led MLB.com's Fastcast the other day were almost as jarring as the news they told.

Miller darkened MLB's door in 1966, when he arrived to run the baseball players union. The players didn't even want him.

Before Miller, baseball was the American passtime, but time was passing it by. The baseball clubs were either expensive playthings for wealthy "sportsmen" or small family owned and operated buisnesses. For some owners, profits didn't matter a great deal, and it was easy enough to contain costs by rolling over the players in contract negotiations. The club owners were paternalistic towards players, and players had a tendency to reciprocate that kind of relationship. The players weren't looking for trouble when they hired Marvin Miller.

But some of the more visionary players, Robin Roberts among them, saw that players were about to be shorted by events if they didn't hire full-time representation. MLB had recently expanded by four clubs, and there was talk of more. CBS had recently purchased the New York Yankees. The newly-located Atlanta Braves moved twice in just more than ten years. MLB had recently signed its first national television contract, a multi-million dollar deal with ABC. And, most foreboding, the mechanism for funding the players' pension plan was about to expire. A little money was about to enter the game, and the players didn't have a path to their share without a professional advocate.

The popular choice, according to John Helyar in his fine 1994 book, "The Lords of the Realm," was a municipal judge from Milwaukee named Robert Cannon, who had run the players union as a side project since 1959. Cannon was chummy with owners, which players thought was an advantage. He wanted to be commissioner. The owners liked him so much that they gave the union $150,000 per year to pay for a director and fund an office.

Players also interviewed others, including Marvin Miller, who had been the lead intellectual with the United Steelworkers of America. But Miller left the interview knowing he had blown it. The deal breaker came when Roberts, who recruited Miller, suggested Richard Nixon as the general counsel for the union. Roberts reasoned that players were a conservative lot, so balancing off Miller, the working man's lefty, with one of the country's leading anti-communists might secure more easy approval. Miller knew that wouldn't work and left the meeting, advising Roberts and others on the players' executive committee that they really ought to let their executive director pick his own general counsel.

The story might have ended there, except Cannon wanted too much. He wanted to office in Milwaukee, and the players wanted him in New York. Cannon also wanted the players to match his pension as a judge. Negotiations failed, the players withdrew their offer, and the executive committee again turned to Miller.

This time, Miller wasn't so enthusiastic. But Roberts kept calling. Later, Miller received a call from Bob Friend, a member of the executive committee who had supported Cannon. Friend apologized. Miller said he would take the job if the general membership would elect him.

Miller went on a tour of the spring training camps in 1966 to secure ratification from the players. There, he met an odd mixture of people and events.

The lesson was clear: Two players, negotiating in tandem, accomplished more than they could have separately. And now the owners were more angry than ever that the players were about to vote on Marvin Miller, the union boss who could soon have them negotiating collectively.

If players saw the advantages of collective bargaining, they also were dubious about the union man. Then, as now, the players tended to come from conservative parts of the country -- the rural south and right-wing metropolitan areas like Houston, Dallas and Orange County. They associated unions with goons, thugs and compromises against individual initiative.

The owners and players, it seemed, had a common enemy in Marvin Miller. At the first Arizona spring camp Miller visited, that of the California Angels, Angels player representative Buck Rodgers campaigned against him. Some of the guys in uniform thought Miller might be a communist. When Miller left the Arizona camps, he was down, 102-17, in the ratification vote.

But Miller found his footing in Florida, where the players also were less pliable by ownership. He wound up winning the ratification vote, 489-136.

Miller now had his own union to run, but it was tiny, toothless, and all but broke, "with only $5,400 in the bank and a battered filing cabinet to it's name," as Helyar put it. Then the owners, furious about Miller's selection, withdrew their $150,000 annual stake for the union. Miller ended up pushing through a $344 per year player payroll deduction to fund the operation.

Taking a slow, piecemeal approach, Miller saw that a membership of only about 600 people gave him a chance to create a fully democratized union with full participation from the rank and file. He got the players talking. And as they gained knowledge while the owners continuously tweaked them by attempting to tweak Miller, the players developed a very firm union concsiousness and identity.

Today, we take comparative salary data as a given in player contract negotiations. It's part of our juice for evaluating our favorite teams and players. Fans might not like the enormous salaries, but they love the idea that their favorite teams might be able to pick up good players on the open market, and we debate endlessly about which players are worth what money for which club. It's part of the fun.

Before Miller, no one knew how much anyone made, which especially killed players in contract negotiations because owners would lie to them about it. Two great stories from Helyar's book should illustrate (and if you haven't read Helyar's book, do yourself a favor and read it).

One can understand why the owners might guard their salary information like a state secret. But Miller found a way around it. He asked every player to write his salary on a slip of paper, give it to his team's player rep, then that rep would pass the slips along to Miller. That is how the baseball players union collected its first comparative salary data. The Dodgers player rep, Ron Fairly, was upset to find he had only the eighth highest salary on the team. During contract talks, the Dodgers told Fairly they couldn't pay what he asked for because he already was the fourth highest paid player on the club.

Before long, the players were even more radical than Miller. In 1972, Miller advised the players to not strike. They went out, anyway. Miller advised Curt Flood that he would lose what remained in his baseball career in 1970 if he challenged the reserve clause in court, because he was likely to lose the case. But Flood was willing to go down fighting.

In time, Miller came to understand the psychology of club owners so well that he knew how to ask for less than he could get, seeing that skittish ownership would make up the difference, and then some. Miller understood, for example, that completely open free agency would maintain equilibrium between player supply and demand, thus keeping player salaries at equilibrium, if that. When Miller offered to the owners limited free agency so no player could walk until he had six years in the big leagues, owners jumped at it. But now that the free agent supply was restricted, each player who went on the free agent market was in greater demand.

Of course, this pitted the owners against each other, which made them even more furious with Miller. But it also showed us the way to baseball's future, because clubs suddenly were signing contracts they couldn't afford without enhancing their revenue sources. In 1978, the Philadelphia Phillies were able to work a deal with free agent Pete Rose only after a local broadcaster promised the club that Rose's presence would generate the ad revenue to cover it. Then, within a couple months of signing Rose, the Phillies added $2.5 million to their season ticket base. The Phillies paid for Rose's four-year, $3.2 million deal before he ever played a game in their uniform.

Atlanta Braves owner Ted Turner put his little Atlanta television station, which carried the Braves games, on national cable, thus beaming the Braves into every American marketplace -- including the markets of the other big league clubs. Turner further infuriated owners by over-paying for marginal players, which drove up the costs of free agents. But it didn't hurt Turner any, because his Superstation TBS made bundles off the Braves. He came to understand that the TV station broadcasting the club could make more money off the club than the club could make from its own business. Today, every club in the major leagues either owns the TV station that broadcasts its games, or is working like mad for a similar arrangement.

Before Miller came along, baseball clubs saw the television as a threat to their enterprise. Television was competition for the entertainment dollar. Television was going to destroy baseball the same way it destroyed movie theaters. In 1965, total combined television revenues across baseball were $25 million, about $183 million in today's dollars.

By now, the clubs have come to understand how television works. MLB's national TV deals starting in 2014 will pay the game $1.5 billion per year, $50 million per club per season. That's just national TV. Everyone gasped when Magic Johnson's group rolled out $2.15 billion for the Dodgers. Now, it appears the Dodgers will sign a local television deal worth three times that amount.

Miller encouraged player to attend bargaining sessions, and they frequently would, dozens at a time, often rattling the owners' negotiator, whoever's turn it was to take on that man, Miller. In 1981, when Miller believed he really had become the issue, he withdrew from negotiations for a time and turned them over to the players. Always Miller reminded the players that the union was their union, and they made it their own.

By 1994, the owners still didn't understand. With Miller retired, they thought they could break the union by forcing a strike. That gambit was foolish, because the union really was about the players, and it cost the game dearly. Now, we're going on 20 years of labor peace in baseball. The lesson finally has been learned.

Other sports still deal with work stoppages because their players haven't demonstrated the kind of knowledge or commitment that Miller trained into the baseball players. By the end of the 1994 baseball strike, baseball owners knew that their players union was about the rank and file, and not the leadership, which is why the Major League Baseball Players Association is now said to be the strongest union in America.