A new day in the AL East? Maybe just a different year

The 2013 season might not signal a new day in the American League East, but it's certainly a different day. The New York Yankees and Boston Red Sox might not fight at the top. They might even end up fighting at the bottom. 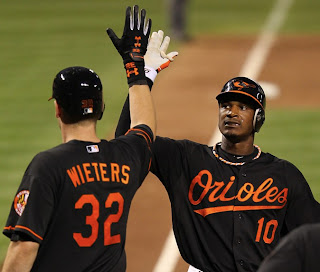 You saw a lot of this in Baltimore Orioles games last season -- Adam Jones (10) and Matt Wieters (32) congratulating each other at the plate (Keith Allison/Creative Commons).

We forecast a wide open race for the American League East in 2013, and we're not alone. It's an important story in baseball this spring, and it is nice to wonder what might happen. The rivalry between the New York Yankees and the Boston Red Sox, to which the game's complete attention was directed until not very long ago, was cracked in recent years by the Tampa Bay Rays, and now the Baltimore Orioles and Toronto Blue Jays are rising, while the Yankees and Red Sox are falling, and no one knows how this will end.

We began to see shifting about 18 months ago, in September of 2011, which started with the Red Sox leading the AL East by one-half game. The Red Sox tanked, 7-20 in September to finish seven games out of first place. Last year, the Red Sox were 53-51 through July, going nowhere with a new manager, and there was more blood. A motivated buyer emerged in the Los Angeles Dodgers, enabling the Red Sox to unload $300 million in contracts and go back to the drawing board. And that's where the Red Sox remain, on the drawing board, which is why they are probably a last-place team in the AL East.

Maybe the Orioles were lucky to win 93 games last year, but they weren't lucky to win 85. Their Pythagorean record was 82-80, and if you split their one-run games last year evenly, they would have been 83-79. So, they're legitimately 85ish, and even if that's all they really were in 2012, that's still a substantial real improvement for a young, veteran team with room to get still better. We're not predicting regression for the Orioles. We see a team coming to the moment with good players still growing into their skin as they reach their athletic prime. And when you look at the Orioles position group by position group and compare them with the other teams in this division, there's only one case -- the Yankees infield -- where you might say someone else is better off than the Orioles. But that's the only one, and it's still debatable.

For a nearby comparison, consult the Washington Nationals, who improved from 69 to 80 wins in 2011, despite a 27-27 record in one-run games. That 11-game improvement was real, and the Nats built on it, rocketing to the NL East title in 2012 (still only 27-21 in one-run games), and now they're going to have a lot to say about who wins that division for the next several years. The Orioles are very capable of taking that path.

Seeing the Orioles surpass them and move into the expanded playoffs, the Toronto Blue Jays followed with a bold offseason, trading a stash of prospects to the Florida Marlins for a stash of big contracts and the proven performers who come with them. Next came, perhaps, an even more audacious trade in which the Blue Jays picked up the 2012 NL Cy Young winner, R.A. Dickey, in a seven-player deal with the New York Mets.

Suddenly, the Toronto pitching rotation, about the worst in the AL last year, has some depth and complexity. By adding Josh Johnson and Mark Buehrle in the Miami trade, the Jays added not just two established starters, but two very different kinds of starters -- Buehrle, a left hander with craft, and Johnson, a tall right hander who doesn't throw the old fire, but can still dial it up. Then toss in Dickey's knuckleball. Forget how teams bat against the Blue Jays. We're dying to see how teams hit in the series after they play the Blue Jays. The Jays can match a lot of other teams for depth in their rotation and surpass most of them for pure bafflement. If they don't win it, they'll have a lot to say about who does.

The Miami trade also installed a new middle infield in Toronto, now featuring Jose Reyes at shortstop and Emilio Bonifacio at second base. Reyes is an All-Star player who will give the Jays an offensive personality at the top of their order, but metrics say he is a downgrade defensively from the departed Yunel Escobar, who went the other way in the deal. Bonifacio doesn't do enough offensively to hold a regular position, so the Jays can still do better at second base.

Bonifacio's value is that he can take a glove to a lot of positions and put speed into your batting order while you're resting other players. But he had a decent spring for the Blue Jays (.271, eight steals in eight attempts), so he might be worth a shot every day at second base. Last year, the Blue Jays went with Kelly Johnson, an easy enough player to replace. Johnson is an out maker, but he hits one out once in a while, so he ends up a little better than average offensively as a second baseman. Defensively, Johnson isn't thrilling, but he isn't destructive, either, and that makes him a little better than average. If you have Johnson playing second base every day, you're thinking you can upgrade, which is one reason Tampa Bay in 2013 will be his fourth club in five years. But you can also do worse. Which one is Bonifacio?

As it happens, last year's Toronto middle infield of Johnson and Escobar has relocated in Tampa Bay, another reclamation project in Joe Maddon's workshop. We keep expecting the Rays to get worse as they lose players, but they never really do, and it's because Maddon sees things that we don't. So, we'll register the usual reservations about this team while fully expecting that Maddon will fix the game so the reservations are irrelevant.

For example, there's James Loney, the first baseman who hits everything off the end of his bat. Absolutely no threat offensively. The Rays signed him as a free agent. Hearing Maddon talk about it, you would think the Rays were touched by inspiration. Loney will be 28, Maddon noted, adding that Loney has been around a bit and 28 is when a lot of guys figure it out. Now, Loney is going to a good environment for learning something about the game, a low pressure contender with a serious disposition, and it's worth the while to see if Loney figures it out there. Loney already fits with Tampa because he is elegant defensively, and if he can turn a few into those right field seats at Tropicana Field, where Carlos Pena made most of his living, then the Rays will be dangerous.

It's true that the Rays lost B.J. Upton to free agency, but these are the calls they have to make, and they absolutely got it right. Upton topped out at $7 million with the Rays in 2012. The Braves signed him for five years at $72 million, a little more than $14 million per year. That means the Rays needed $14 million per year to keep him, and he's not $14 million worth. Torii Hunter, who is worth $14 million, signed with Detroit for two years at $26 million. We'll say the Tigers made the better deal. Whichever, the Rays couldn't get in on Hunter, either.

But the Rays are ingenious, and a little lucky. Thinking James Shields would walk after 2013, they shipped the last year of his contract and Kyle Davies to Kansas City for such a big haul of prospects that they've already been declared the winner of this trade even though their new guys have a combined two games in the major leagues entering the 2012 season. The Rays took center fielder Wil Myers, left hander Mike Montgomery and right hander Jake Odorizzi. All three are 23 or younger, Myers and Odorizzi both have succeeded at Triple-A and Montgomery was a first-round draft pick.  With one swoop, the Rays, perhaps, have produced young, cheap and nearly ready replacements for Upton, Shields and Davies.

If the Yankees could only replace Mark Teixeira, Curtis Granderson and Alex Rodriguez so swiftly. All three are injured this spring, and, of course, Derek Jeter and Mariano Rivera are coming back from injuries. It's true that the Yankees can absorb injuries better than other clubs, but they have way too much talent on the disabled list now, and not enough talent on their active roster. A report recently noted that the injured Yankees, combined with what the Yankees are paying A.J. Burnett to pitch for Pittsburgh, come to more than $100 million in payroll. The majority of major league clubs, 16 of 30, are paying less than that to their entire teams.

Yankee haters can gloat this time, because not only did the Yankees not sign any key free agents during the winter, but they lost two key free agents. Nick Swisher gave the Yankees a solid right fielder and an option for resting Teixeira. If he were with the Yankees today, Lyle Overbay would not be. Meanwhile, Russell Martin gave the Yankees presence behind the plate, not because Martin is a Hall of Famer, but because the team with Martin catching is better off there than most other teams. The Yankees no longer are so well off. Martin signed as a free agent with Pittsburgh and the Yankees have no one nearly as good in his place.

So, one looks at the Yankees and sees voids where last year he saw Teixeira, Rodriguez, Granderson, Swisher and Martin. And that view of the Yankees is a little fuzzy regarding Jeter and Rivera. Take injuries out of the calculation and the Yankees would have to be favored in 2013. But the injuries can't be removed and the Yankees can't be clearly favored.

The Yankees and Red Sox, with the first and fourth highest payrolls, respectively, entering 2013, might end up fighting each other this time to stay out of the cellar. That would put a new twist on a very bitter rivalry. You won't want to miss it, and you won't have to. Fox and ESPN have scheduled six national telecasts of the Yankees and Red Sox from June 1 through Sept. 14 (in addition to two national broadcasts of the same two clubs during the first week of this season). Some things don't change, even in this division.