The Angels sent 30 hitters at Houston starter Bud Norris Wednesday night at Minute Maid Park. Of those Angels hitters, 23 were in and out within three pitches. In the standings, the Angels still are better than the Astros, but, on the field, the Astros have beaten them twice in a row. 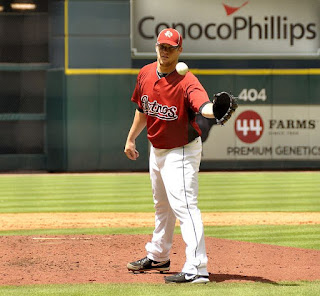 The pitching: Joe Blanton tossed up his third straight quality start, but the Angels still are 0-7 when he's on the mound. The Astros took some good swings at Blanton in the third inning, when they hit three doubles and sent center fielder Mike Trout to the foot of Tal's Hill with a long out. The Astros aren't the worst offensive team in the AL (the Chicago White Sox are), but they do have the worst ratio of strikeouts (343, most in the AL) to walks (87, 13th of 15). So, Blanton struck out six and walked none in 6 2/3 innings, but that's hardly distinctive against the Astros.

Norris has career ERAs of 3.39 at Minute Maid Park and 5.41 on the road. He strikes out more than 25 percent of the right-handed hitters he faces (90 of 331 last year), but he nibbles against left-handed hitters, so they walk and homer against him with frequency. Put Norris in his home park against an Angels team that isn't known for its disciplined left-handed inning and one could almost predict Wednesday's result -- eight innings, nine hits and one walk, which came in the eighth inning. Angels manager Mike Scioscia likes to put the game into motion and Norris does not. He is one of the slowest workers in the game. There's always time for two or three TV replays between pitches when Norris is out there, so you don't really notice it unless you're watching him live. Antsy Angels hitters let the live audience off that hook Wednesday night.

The hitting: When Bud Norris goes into the ninth inning and the game is done in 2:30, you know the other team is swinging the bat. Norris left with one out in the ninth after throwing only 84 pitches. He almost couldn't get into a 2-0 count if he wanted to. Wednesday, Norris threw first pitch ball one to 10 hitters. Only one of those counts went to 2-0. Three times, Angels hitters fouled off the 1-0, they hit the 1-0 into outs three other times, another two were called strikes and one inning ended with a first-pitch ball when Mark Trumbo was thrown out trying to steal with Josh Hamilton batting. No hits on 1-0. The Angels struck Norris's first pitch eight times, cashing in four hits. All three Angels hits by left-handed batters -- including Hamilton's seventh-inning homer -- came on the first pitch. The only 2-0 count came in the first inning against Pujols, who hit the next pitch to left field for a double.

The base running: The Angels were the more aggressive base running team, but the Astros don't open up running opportunities by kicking the ball around. Twice, the Angels went from first to third on singles. The first time, in the fifth inning, Alberto Callaspo singled Howie Kendrick to third with one out on the first pitch, but Chris Iannetta followed by beating into an inning-ending double play on the first pitch. In the ninth, Angels down, 3-1, Trout took third on a single by Pujols with no one out. That proved to be Norris's last hitter in the game. The Houston reliever, Jose Veras, wriggled out with a strikeout and a double play.

Trumbo tried to steal second base with two out and Hamilton batting in the fourth. Trumbo was out easily. Angels manager Mike Scioscia said on MLB.com that Trumbo "misread" a sign, taking it to be a hit-and-run.

The fielding: The reason the Astros won't lose 120 games is because their interior defense is tight, and they've got some pluses in their outfield, as well. The Astros get out-hit and out-pitched, but they don't beat themselves with poor defense. Wednesday, they whipped out four double plays and made two nice catches in the outfield.

Angels fans watching their team try to play without shortstop Erick Aybar and catcher Chris Iannetta know what shabby interior defense looks like. In particular, the Angels just can't keep sending Hank Conger behind home plate unless he hits like Babe Ruth. Conger's defensive foibles in Tuesday's 7-6 loss at Houston are too numerous to document. Wednesday night, Conger caught the eighth inning and showed no signs of improvement. He was lucky when Jose Altuve bunted foul, because Conger's throw wasn't in time to get the unforced lead runner at third, anyway. Later in the inning, Houston's Trevor Crowe bunted back to Angels pitcher Dane De La Rosa, who flipped the ball to Conger at the plate. Conger's tag missed Jimmy Paredes, but home plate umpire Bill Welke ruled that Paredes missed the plate and called the runner out on Conger's belated tag. Replays showed that Welke missed the call and Parades really did touch the plate, so Conger dodged a bullet.

Angels center fielder Mike Trout made a fine running catch at the foot of Tal's Hill on Robbie Grossman's drive hit straight behind him. Trout made the catch over his shoulder with his back to the field. That catch kept a two-run Houston inning from being a lot worse. Trumbo, playing first base, made a nice leap into the air trying at Jimmy Parades line-drive double in the third, but the ball got past him.

Strategic moves: Houston manager Bo Porter wanted to be sure, above all else, that Norris didn't lose this game after going to the ninth with a 3-1 lead. When Pujols reached as the tying run with no one out in the ninth, Porter called on Jose Veras. Porter told the media postgame that removing Norris then guaranteed he would get no worse than a no-decision. The reliever struck out Trumbo with three curve balls, hit Hamilton with a pitch and induced a game-ending double-play grounder by Howie Kendrick.

What now: The Astros will still be in last place at the end of Thursday even if they beat the Angels to sweep the series, but just barely. The Astros now are 10-24, while the Angels are 11-22. The Angels are going with left hander Jason Vargas (1-3, 3.72), who has three straight quality starts. His last start is his best of the year, a three-hit complete game shutout for a 4-0 win at home against Baltimore on May 3. The Astros are sending out right hander Lucas Harrell (3-3, 5.03). Harrell was good in five of his first six starts, but the Tigers really tore into him last week, scoring eight times in 4 1/3 innings. That outing upped his ERA from 3.60 to 5.03. The Astros have three coming up at home against Texas during the weekend, while the Angels will go to Chicago and play another last place team, the White Sox, during the weekend.