As Kemp goes, so go the Dodgers ... badly

Nearly a half-season of games have come and gone since the Dodgers made the big trade with Boston to add offensive pieces around Matt Kemp. But Kemp hasn't given them much to build around -- just seven homers, 31 RBI and a .248 batting average in those games. 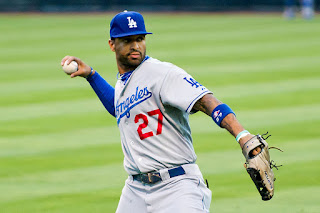 We've realized for quite some time that the Dodgers go as Matt Kemp goes. We're realizing it now more than ever.

Last Aug. 20, the Dodgers stunned the baseball world by taking on $273 million in contracts from the Boston Red Sox. By adding Adrian Gonzalez and Carl Crawford, the idea was that the Dodgers would add pieces around Kemp's anticipated production. Before the Red Sox trade, the Dodgers traded to receive Hanley Ramirez from Miami. Thus, the Dodgers added three pieces to Kemp and Andre Ethier, surely enough to create a productive offense in any ball park.

Crawford wasn't available until this season, and Ramirez has all but missed the entire 2013 season, so the group hasn't been together as hoped. But the Dodgers have always had four of those big bats around, and those big bats haven't added up to a big offense.

It's commonly understood and not at all surprising that the Dodgers are getting nothing offensively from their shortstops and third basemen, which points to the damage from constant injuries to Ramirez this season. But if we're really looking for a surprising weak link in the Dodgers' surprisingly weak offense, that one is easy.

Check out the numbers for Kemp and the Dodgers for the last 40 games of the 2012 season, starting with the Boston trade.

These guys are setting the table and Kemp isn't eating. Here's a helpful set of numbers from baseball-reference.com (and, as always, that's where we get our numbers). Kemp had 13 RBI in his first 122 plate appearances. The average big league player with 122 plate appearances had 13 RBI. But with Crawford and Ellis on base in front of Kemp, the Dodgers' No. 3 hitter had many more opportunities than the average big league player. Kemp came to the plate with 99 runners on base, 49 of them in scoring position. The average player with 122 plate appearances came to the plate with 73 runners on base, 35 in scoring position. But Kemp has the same 13 RBI.

If Kemp drove in runs at the rate of the average hitter, given that he has more run-producing opportunities in his 122 plate appearances, he would be around 20 RBI. If he were hitting the way we expect Matt Kemp to hit, which is at a level well above the average player, he might be approaching 30 RBI and battling for the league RBI lead.

With runners in scoring position, Kemp has six singles in 33 at-bats for batting and slugging averages of .182, driving in 10 runs. With two outs and runners in scoring position, Kemp has two singles in 13 at-bats for three RBI to go with batting and slugging averages of .254. With two outs, Kemp is seven-for-39 with a double and a homer for five RBI, but his batting average is .179 and his slugging average is .282. In the first inning, which is generally the best chance to score, Kemp is five-for-25 with two doubles, three RBI and a long slash line of .200/.231/.280/.511.

Kemp is tearing it up in the fifth through seventh innings against tiring starters and low-shelf relievers. During those innings, he is 17-for-40 (.425) with three doubles, a homer and eight RBI. In all other at-bats, he is hitting .176 (13-for-74) with no homers and five RBI.

Kemp’s troubles create ripple effects going down the lineup. For example, Gonzalez, batting right behind Kemp, is hitting as expected, .337/.398/.500/.898 for a 150 OPS-plus, about what he has done in his best years. In his first 112 plate appearances of 2013, he drove in 20 runs against an average player’s 11 RBI in 112 plate appearances. Gonzalez is driving in the extra runners the Dodgers have on base for him. He came up with 79 runners on (35 in scoring position), compared with the average hitter's 67 base runners (32 in scoring position). There could be a lot more, except that Kemp is ending a lot of innings, forcing too many at-bats for Gonzalez with the bases empty.

Surely the Dodgers didn’t count on Gonzalez, their cleanup hitter, to lead off innings 30 times already. He’s leading off innings in 26.5 percent of his plate appearances. During his career, he has led off 20.2 percent of the time. Throughout his career, Kemp has been a good two-out hitter (.283 batting, .488 slugging, .842) OPS. But he’s not even close to that, and it’s costing Gonzalez RBI opportunities.

We've figured for a long time that the Dodgers would go as Matt Kemp goes. Now, we're sure of it.