The Dodgers didn't make pitches or plays in their 6-2 loss to the Washington Nationals at Dodger Stadium Monday night. The Dodgers batted only one-for-11 with runners in scoring position, and they matched that performance on the field and the bases. 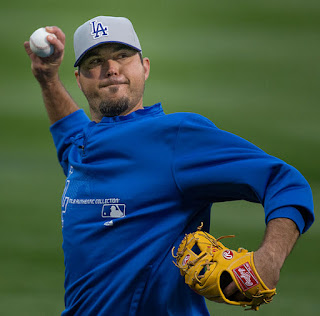 Summary: Jordan Zimmermann tossed a nice start for the Nationals, scattering nine hits in 7 2/3 innings, while Josh Beckett had to leave after pitching the first three innings for the Dodgers, during which he allowed four runs. But the real difference in this game was that the Nationals made plays and the Dodgers didn't.

The pitching: Washington's Jordan Zimmermann didn't throw anything but a four-seam fastball for the first two innings and the Dodgers barely touched him. That was his ball game. Here it is. Hit it. Through five innings, he threw 59 pitches, all four-seamers except for eight sliders and four curves. Through seven innings, Zimmerman threw 83 pitches, all four-seamers except for 14 sliders, four curves. Through all of that, the Dodgers scored one run. They simply could not hit Zimmermann's fastball. All of the Dodgers hits against Zimmermann (they only had six through seven innings) came on fastballs, but so did all but three of their outs ... Zimmermann struck out five and walked none …

Dodgers starter Josh Beckett completely lost his control in the third inning and couldn't find the plate with either fastball or his changeup. He walked the pitcher leading off the inning on five pitches, then went 2-0 to Steve Lombardozzi before the hitter ripped a liner past Dodgers first baseman Adrian Gonzalez. Right off that, Beckett walked Bryce Harper on five pitches, then he went 2-0 to Ryan Zimmerman before the batter doubled to right, driving in two runs. Beckett left the game after the third, complaining of groin pain.

The hitting: When you have one of the fastest runners in the game, Dee Gordon, on third, with nobody out and the likes of Adrian Gonzalez, Matt Kemp and Andre Ethier coming up, you should score. Unless you're the Dodgers, in which case you probably shouldn't. At least, the Dodgers didn't when that chance came their way in the fourth inning. The best swing the Dodgers got was Ethier's hard beater into the ground for the third out ... No big surprise there. Washington starter Jordan Zimmermann entered the game with opposing hitters batting .156 with runners in scoring position, and the Dodgers were batting .228 with runners in scoring position ... Kemp did get a hit later on with a runner in scoring position, extending his hitting streak to 12 games ... Washington hitters didn't exactly destroy the ball. Other than Ryan Zimmerman's third-inning double and the smash by Steve Lombardozzi that preceded it, Washington hitters just put the ball in play and let the Dodgers fielders take care of it. Or not.

The base running: Dee Gordon did some nice stuff on the bases  -- and some questionable stuff. In the fourth, he stole second, forcing an errant throw from Washington catcher Kurt Suzuki and taking third with no outs. But he didn't score, partly because nobody hit behind him, and partly because he didn't seize opportunity. When the next hitter, Adrian Gonzalez, popped out to second baseman Danny Espinosa in short center field, Gordon didn't run, even though the second baseman was running toward the outfield. That was a run the Dodgers missed … In the eighth, with one out, Gordon hit a ground ball, but beat out the back end of the double play to keep the inning alive. Now, the Dodgers were down, 6-1, with two out in the eighth and Gordon on first. Adrian Gonzalez then singled to right field, where Roger Bernadina, instead of Bryce Harper, was playing for the Nationals. Gordon didn't even consider trying to take third. He scored, anyway, because Matt Kemp followed with a single. Gordon would have broken all the verities of the game if he were thrown out at third to end the inning with his team behind. So, we can't really blame Gordon for not putting his speed to work there. But there is that little voice that wanted him to force a throw ... In the sixth, Carl Crawford stole third base with Kemp batting and two out. But Kemp popped up to end the inning ... The Nationals twice took third base from first on singles to right field.

The fielding: Washington made several good-but-not-great plays, those plays a team must make to contend. The Dodgers blew several fairly routine plays, which is one reason they're in last place ... In the fourth, with Dee Gordon on third and no outs, Washington second baseman Danny Espinosa made a nice catch with his back to the infield in short center on Adrian Gonzalez's pop-up. To end the inning, Washington first baseman Adam LaRoche kept a late hop from hitting his face on a ground ball by Andre Ethier, but recovered and made a seated throw to Jordan Zimmerman at first for the out. In the sixth, Washington shortstop Ian Desmond went quickly to his left to take a grounder up the middle from A.J. Ellis, then threw to first for the out ... Even the big disaster of the night at least illustrated that the Nationals are serious about their defense. In the fifth, Ellis hit a smash to deep right field. Washington right fielder Bryce Harper went after it full speed in a 6-0 game and smashed into the fence face first. Ellis ended up with a triple and scored on a ground ball. Harper, on the ground for several minutes with cuts on his forehead, chin and right hand, is day-to-day ...

Now, the Dodgers. In the third, first baseman Adrian Gonzalez misplayed a smash from Steve Lombardozzi for an error. The ball skidded into right field and opened up a three-run inning. In the fifth, shortstop Dee Gordon crossed in front of second base to misplay grounder by Lombardozzi, even though Dodgers second baseman Skip Schumaker was behind him for a relatively routine play. Gordon ended up screening off Schumaker and the ball went into center field for a single. One batter later, after Bryce Harper walked, Dodgers reliever Javy Guerra made a bad pickoff throw trying to take Lombardozzi off second. Gordon ended up having to lay out to the third base side trying to catch the throw, but it went into center field, allowing Lombardozzi to score and Harper to take third ... In the sixth, the Dodgers added two more miscues. First, catcher A.J. Ellis let a passed ball by him, allowing Jordan Zimmermann, who had singled, to take second. Later, Roger Bernadina hit a ground ball to first baseman Adrian Gonzalez, but pitcher J.P. Howell didn't cover first base in time and everyone was safe ... The Dodgers did make one notably nice defensive play, when third baseman Nick Punto went to his right to take a hard bouncer down the line from Danny Espinosa, then made a sharp throw to first for the out.

Strategic moves: Sometimes, one wonders what Don Mattingly is to do. Entering the Monday game, his No. 3 hitter, Matt Kemp, was six-for-36 (.166) with runners in scoring position, and his No. 4 hitter, Adrian Gonzalez, was 14-for-28 (.500) in those situations. With the tough right hander, Jordan Zimmerman, going for Washington, Mattingly flipped them, so the left-handed Gonzalez would bat third and the right-handed Kemp would bat fourth. How did that work out? Kemp was one-for-three with runners in scoring position, and Gonzalez was zero-for-two.

What now: The Dodgers fell to 15-22, increasing their last-place distance from San Francisco to 7 1/2 games in the NL West. Washington improved to 21-17 and remains one game behind Atlanta in the NL East. Tuesday night, it's back to left hander Clayton Kershaw (3-2, 1.62) for the Dodgers in their series with the Nationals at Dodger Stadium. The Nationals are going with veteran right hander Dan Haren (4-3, 5.17).