The convalescent New York Yankees continue to surprise with their disabled list of superstars and their replacement lineup of oldies but goodies. Friday night, it was Lyle Overbay and Ichiro Suzuki who paced a 16-hit attack as the Yankees outslugged Kansas City and presented starting pitcher Phil Hughes with a change of luck. 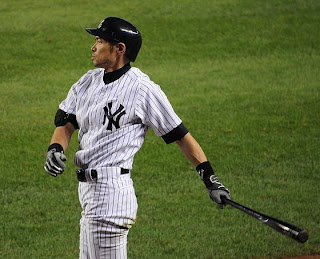 Summary: The Yankees battered out 16 hits, including home runs by old war horses Ichiro Suzuki and Lyle Overbay. Despite a thin relief staff for this game right off a series in Colorado, the Yankees won it in their bullpen, which produced 3 1/3 innings of shutout pitching with eight strikeouts.

The pitching: Yankees starter Phil Hughes was 1-0 with a 1.93 ERA in his last four starts entering Friday's game. He left two of those after seven innings with 2-1 leads and left another after the sixth with a 2-1 lead. In those four games, he threw 109, 109, 111 and 118 pitches. Hughes wasn't so good Friday night, leaving with two out in the sixth after allowing six runs in 98 pitches. But he led, 10-6, so he claimed the win and a change of luck.

Davis entered the game having allowed 12 earned runs in 15 innings over his most recent three starts. The Yankees chased him Friday two batters into the sixth inning. Davis allowed seven runs. Davis imploded in the second, walking leadoff hitter Travis Hafner, then allowing Suzuki's homer to right on a first-pitch fastball. The next hitter, Jayson Nix, doubled on a 1-1 fastball down before Overbay crushed a 3-1 cutter over the right field fence to give the Yankees a 4-0 lead.

Hughes seemed intent on matching Davis in the bottom of the second, when he walked leadoff man Eric Hosmer on five pitches, then allowed an infield single by Salvador Perez on a 1-2 slider. Hughes backed up to No. 1 and went to nothing but four-seam fastballs for the next 12 pitches. The first five struck out Mike Moustakas, the next three struck out Elliot Johnson, and the four after that put the count 2-2 on Jarod Dyson. After a slider in the dirt made it 3-2, Hughes went back to the four-seamer and Dyson saw it coming, launching a three-run homer to right field.

The hitting: With all their missing players, which include Mark Teixeira, Derek Jeter, Alex Rodriguez and Francisco Cervelli just from the starting lineup, the Yankees are patching it together with guys who wouldn't be getting a chance anywhere else. For example, there's Lyle Overbay, who went four-for-five Friday with two doubles, a homer and five RBI. Ichiro Suzuki doubled and hit a two-run homer off Davis, against whom he now is 10-for-19 lifetime. It was a great night for the bottom half of the Yankees order. The five through eight hitters -- Ichiro, Nix, Overbay and Chris Nelson -- were a combined 11-for-19 with four doubles, two homers, eight runs and nine RBI. Even Chris Stewart, batting ninth, kicked in a hit in five at-bats.

The Royals made the most of their seven hits. Besides Dyson's three-run homer, Alex Gordon was two-for-four with a two-run double and Moustakas hit a solo homer. Six runs usually are enough to win, but the Royals needed more and their four and five hitters, Billy Butler and Eric Hosmer, were a combined zero-for-seven. And the Royals couldn't touch New York relievers. Of the last 10 Kansas City hitters, eight struck out.

The base running: The Yankees broke open a 5-5 game in the sixth inning mostly by crushing the offerings of Davis and Chen, but there was a little base running involved. The Yankees already had scored three times in the inning with none out and Chris Nelson on first when Chris Stewart hit a double-play grounder to second. Nelson made a good enough takeout slide at second to keep Royals shortstop Alcides Escobar from relaying to first. Thus, Stewart was on to score when Brett Gardner followed him with a triple.

Looking at a game in which one team holds a four-run lead going to the seventh inning and the other team can't put anyone on, you don't expect to see a lot happening on the bases. Even if the trailing team puts runners on, it usually doesn't want to risk outs on the bases. The team that leads is free to run, except for the informal constraints on playing with a large lead late. A team leading by six or more after the sixth inning is thought to be showing up a beleaguered opponent, and, therefore, playing in poor taste, when it keeps putting on plays, stealing bases and maybe even taking bases on fly balls to the outfield. If all you're doing is swinging the bats and you're still scoring, no one has a complaint. The Yankees only led by four, so they kept playing.

With one out in the eighth, Stewart went from second to third on a fly ball to center field by Wells. Stewart might have scored, but Escobar was positioned to field Travis Hafner's grounder up the middle. Escobar fielded the ball on the right field side of second base and threw to first, ending the inning. In the ninth, Ichiro singled, then stole second base. He scored on Overbay's single, giving the Yankees an 11-6 lead. The Yankees were two-for-two in stolen base attempts, while the Royals did not attempt to steal.

The fielding: The Royals are quite "in your face" with their outfield defense. They play about as shallow as any outfield in the game, and they come up throwing quickly and accurately. For a team that gave up 11 runs, the Royals made some nice defensive plays. A lot of them barely missed creating outs, but the way they played was heartening, from a Kansas City standpoint. Watch the Royals outfielders, then watch the Dodgers outfielders, and the difference is hard to miss. The Royals are aggressively trying to get people out.

In the fourth, the Royals made a dandy play on Overbay's double to center field. Jarod Dyson made a nice throw to cutoff man Escobar, who threw a bullet to the plate from short center field to the plate. Nix was still safe coming around from first base, but Escobar made it a bang-bang play. Royals right fielder Lorenzo Cain made a couple of strong throws from right field, even if they didn't get anyone out. Playing shallow did hurt the Royals in the fourth, when Gardner's triple got behind Dyson in center field.

The Yankees didn't win this game with their defense. Ichiro in right and Wells in left are two of the best outfielders we've seen in this century, but both are at the end of the line and neither is what he once was. Ichiro doesn’t have the great arm anymore. When Cain singled to right in the fifth, Escobar took third against Ichiro, whose weak throw was cut by the shortstop. Wells has a .993 career fielding percentage, highest among major league outfielders. But not all fielding misplays are errors, obviously. Alex Gordon's two-run double in the fifth, which tied the game, 2-2, hooked behind Wells, who was facing center field as he approached the warning track.

Strategic moves: The Yankees hoped Hughes could stretch a bit, because Mariano Rivera pitched the previous two games and they were thin in their bullpen. But Shawn Kelly struck out six of the seven batters he faced to get through the eighth inning before Boone Logan closed it out in the ninth with two strikeouts. So, Yankees manager Joe Girardi made it through this one with two relievers despite a short start by his starting pitcher.

It was a different story for Kansas City manager Ned Yost, who uses his relievers less than anyone else in the American League, just 81 1/3 innings before Friday night. With James Shields, Jeremy Guthrie and Ervin Santana going deep in their starts, the Kansas City rotation has improved so much that Bruce Chen and Luke Hochevar, two anchors of a weak rotation for years, have moved to the bullpen. Whether that's for the best, time will tell.

The game was tied, 5-5, through five innings. To start the sixth, Davis gave up a double to Ichiro, who moved to third on a single by Nix. With no outs and the left-handed hitting Overbay coming up, Yost put out the call to Chen, the lefty who hadn't allowed a run in 11 2/3 relief innings this year. But Overbay lined an 0-1 sinker to right for a double to knock in Ichiro, then right-handed hitting Chris Nelson lined a 1-1 slider to right for a single to plate Nix and Overbay. One batter later, Brett Gardner tripled to drive in Stewart.

In a game that was 5-5 through five innings, one manager's bullpen worked and the other manager's didn't. The good news for Yost was that he stuck it out with Chen for 1 2/3 innings and gave the last 2 1/3 to right hander J.C. Gutierrez, who allowed one run. So, despite the slaughter, Yost didn't cook his bullpen too badly.

What now: The Yankees are 21-13 and remain in first place, still tied with Baltimore and Boston, which both won Friday night. The Royals are 18-15, still second in the AL Central with Detroit's10-4 win against Cleveland. The Royals now are 1 1/2 games behind Detroit and Cleveland is two games back ... The Yankees haven't lost a series to the Royals since 2000. This is the 14th series the two teams have played since then. The Yankees have won 10 of them and the teams tied three others ... Joe Girardi won his 500th game as the Yankees manager. Ahead of him on that list are Joe McCarthy, Joe Torre, Casey Stengel, Miller Huggins, Ralph Houk and Billy Martin ... Today, the Yankees will send Andy Pettitte (3-2, 4.06) out to his 25th career start against the Royals. Kansas City is going with James Shields (2-2, 2.52), who pitched eight shutout innings Monday against Chicago. The Royals ended up losing that one, 2-1, in 11 innings. Shields has pitched 14 straight scoreless innings.