We might say that no lead is safe for the Dodgers, the way their bullpen is going, except that the Dodgers don't score enough to build big leads. Instead, they blow small leads, as they did in Atlanta for the third straight day Sunday, a 5-2 loss. 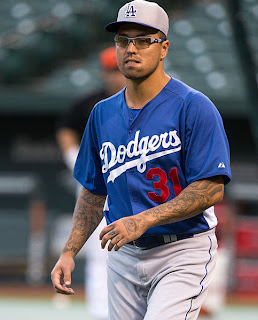 Receiving another chance to close out a lead, if only by default, Brandon League couldn't get the Atlanta Braves to hit the ball on the ground Sunday (Keith Allison/Creative Commons Share Alike-Attribution Generic 2.0 license).

Summary: The Braves swept out the Dodgers, who blew their third late-inning lead in as many games in Atlanta. But the last two, including Sunday's, were such small leads based on so few runs that it's not reasonable to blame them entirely on the bullpen.

The pitching: Dodgers starter Matt Magill came out getting swings and misses at his four-seam fastball, finishing three strikeouts in the first two innings that way and notching a fourth strikeout during that time frame with his slider. But Atlanta starter Mike Minor matched Magill strikeout for strikeout. Through five innings, both pitchers had eight strikeouts. The difference was that the Dodgers, particularly Carl Crawford, hit some balls hard against Minor, which resulted in their 2-1 lead through five ... The Dodgers bullpen stitched it together in the sixth and seventh innings. In the sixth, lefty J.P. Howell came in with a runner on first and no outs, waited through a rain delay and, right away, had to put up with another runner on base by an error to bring up two on and no outs. But Howell struck out Brian McCann, then got a fly out from Andrelton Simmons. With Saturday's killer, Evan Gattis, coming up as a pinch hitter, Dodgers manager Don Mattingly brought in Ronald Belisario, who threw all sinkers and sliders to force an inning-ending ground ball ... Belisario began the seventh by getting the first two men out, then walking Jordan Schafer. With Jason Heyward, a left-handed hitter, coming up, Mattingly called on lefty Paco Rodriguez, who ruined that strategy by hitting Heyward. So Mattingly called right away on Kenley Jansen, who whiffed Justin Upton by throwing all cutters to end the inning ...

But Jansen began the eighth by allowing a single to Freddie Freeman and a walk to McCann, and the disaster was begun with the Dodgers still up, 2-1 ... Enter Brandon League ... When third baseman Juan Uribe right away booted Simmons' sacrifice, meaning the Dodgers couldn't make an out even when the Braves gave them one, the bases were loaded. Freeman, not a fast runner, was now on third, so the Dodgers might have still choked the inning with a ground ball. In some past failures, League could at least make hitters put the ball on the ground. Not this time ... That was a 94-MPH sinker that pinch hitter Gerald Laird lined to right for a single on the first pitch to knock in the tying run ... That was an 85-MPH splitter that Ramiro Pena hit deep to right for a sacrifice fly to drive in the lead run ... That was an 85-MPH slider that Chris Johnson lined cleanly to left field for another single to knock in another run ... Finally, League got someone to hit the ball on the ground -- because Schafer bunted. That drove home another run, too ...

The hitting: The Dodgers put single runs together with the top of their order in the early innings ... In the first, Carl Crawford led off with a line-drive double to left and moved up on a ground ball to the right side by Mark Ellis, just back from the disabled list. Next, Minor buried a two-strike curve to Matt Kemp in the dirt. Kemp swung and missed for the strikeout, while Braves catcher Brian McCann blocked the pitch. But Adrian Gonzalez followed with a fly ball to center, which knocked in the first run ... In the third, Crawford led off with a walk, took third on Kemp's hard double to left and crossed on another sacrifice fly to left by Gonzalez ... But after the third inning, the Dodgers made 14 straight outs before Andre Ethier walked with two down in the ninth and the Dodgers trailing by then, 5-2.

The base running: The Braves made more outs on the bases than the Dodgers, getting caught stealing twice. Dee Gordon, who makes a big share of the Dodgers' base-running mistakes, began the game on the bench, but entered in a seventh-inning double switch.

The fielding: Dodgers catcher A.J. Ellis is letting passed balls by him again -- four this year -- but teams run on him at their peril. In the first inning, Ellis threw out Jason Heyward while Justin Upton swung at strike three to complete an inning-ending double play. In the fourth, Atlanta catcher Brian McCann tried to run on Ellis with Andrelton Simmons batting and two out, but Ellis threw him out ... For the season, Ellis has thrown out 10 of 23 attempting base stealers, 43.5 percent. The league average is 28.6 percent ... Playing shortstop, Nick Punto short-armed his throw for an error in the fifth, allowing Simmons to reach base as the leadoff hitter. The error cost the Dodgers a run, as Atlanta later in the inning hit two two-out singles against Dodger starter Matt Magill to get the run home ... Rain delayed the game with a man on first and one out in the sixth, Dodgers leading, 2-1. After play resumed, the Dodgers were a different team. It began with the very first hitter, when second baseman Mark Ellis botched a grounder, enabling Freddie Freeman to reach and putting runners on first and second ... The killer error came in the bottom of the eighth, runners on first and second, no one out, Dodgers ahead, still 2-1, and Simmons batting. Anyone seeing that game knew Simmons was bunting. But third baseman Juan Uribe came up too fast on the bunt down the third base line and didn't even field it. The error loaded the bases. If Uribe makes the play, they get one out, then the Dodgers can intentionally walk the next batter and maybe get out of it with a double play, except that reliever Brandon League couldn't make anyone hit the ball on the ground. Following Uribe's error came a clean single, a deep sacrifice fly, a clean single and a sacrifice bunt, all of which drove in runs.

Strategic moves: After a loss like this, blaming the manager seems almost obligatory. Surely, Dodgers manager Don Mattingly can't hang it all on his bullpen. In that spirit, but not as a second guess so much as a thought for the future, we'll offer one idea. In the seventh, Dodgers leading, 2-1, Mattingly brought in reliever Kenley Jansen while double-switching with Dee Gordon entering as shortstop to replace Nick Punto. It seemed like an odd choice, considering the following: 1) Punto, we believe, is the team's best defensive third baseman; 2) third baseman Juan Uribe was batting seventh and Punto eighth (The ninth spot was due up for the Dodgers in the eighth. That's where Mattingly slotted Gordon); and 3) with a 2-1 lead, it makes sense to double switch for defense. Thus, it seemed more sensible to put Gordon at short, move Punto from short to third and remove Uribe from the game. As it turned out, Uribe made a crucial error in the eighth to open up a four-run inning by the Braves. The Dodgers only had two more innings to bat at that point, so batting the pitcher seventh instead of eighth would not have been a huge sacrifice. As it turned out, leaving Uribe in to play third base was a huge sacrifice. As it turned out, the seventh spot didn't even bat for the Dodgers in what remained of the game.

What now: The Dodgers fell to 17-25, still fifth in the NL West, seven games behind Arizona. If it's any consolation to the Dodgers, Arizona has the worst first-place record in baseball, 25-19 ... The Braves are 25-18, leading the NL East by 2 1/2 games over Washington ... The Dodgers have a chance to right themselves as they go to Milwaukee for three games. The Brewers are the last-place team in the NL Central at 17-25, same record as the Dodgers ... And the Dodgers will have their three best pitchers going -- Clayton Kershaw, Zack Grienke and Hyun-jin Ryu. We say that as if the Dodgers hadn't just wasted two good starts from Chris Capuano and Matt Magill ... The Milwaukee series starts Monday (5:10 p.m. PDT) with the lefty Kershaw (4-2, 1.40) going against Brewers right hander Yovani Gallardo (3-3, 4.50).