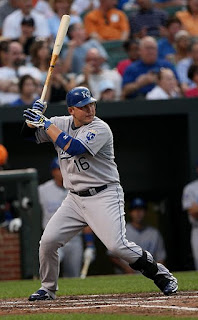 Summary: Kansas City designated hitter Billy Butler went five-for-five with five RBI to lead the Kansas City onslaught. Returning from six games on the road against last-place teams, the Angels looked like a last-place team on their home field. The Angels now are 0-8 in games started by right hander Joe Blanton.

The pitching: Los Angeles pitcher Joe Blanton told reporters after the game that his stuff was "good," but it was just one of those games. To some degree, he's right about that. He's right to the degree that Kansas City hitters often reached base on bleeders and infield hits. He's wrong to the degree that those runners scored on long blasts to the outfield because he missed his pitches. The Royals came to this game with a slumping cleanup hitter, Billy Butler, and Blanton helped him get well. In the first inning, Blanton wanted to get a fastball down and in, but it was down and over the plate so that Butler could hit it to the right field warning track to knock in a run. In the third, Butler took a hanging slider through the middle to drive in two more runs. Kansas City scored six of its first seven runs with two outs, so Blanton just didn't make pitches ...

Kansas City starter Luis Mendoza produced a sound game. He worked inside to right-handed hitters with a 93-94 fastball and picked up three of his strikeouts with swings and misses at a biting slider. He struck out six with no walks in his six innings, improving his record to 1-2 -- and his ERA to 6.00.

The hitting: Kansas City scored as 11 runs and, for the first time in team history, did it without benefit of a walk or a home run. Designated hitter Billy Butler broke out of a four-for-35 slump with a five-for-five game that included five RBI. The game just went his way. When Angels starter Joe Blanton missed with a pitch, Butler tattooed it. When Butler didn't get it quite right and broke his bat, as he did in the fifth, he still ended up with a line-drive single to left. The Royals would not have gotten on top of this game without Butler, whose first two hits came with two outs and combined for three RBI, and whose third hit started a three-run fifth inning. But even if we subtracted Butler from the Royals totals, they still had 14 hits, and they still scored six runs.

The base running: The Royals were two-for-two in stolen bases. But the real base running issued from their hitting with runners in scoring position – seven -for-15. So, the Royals did some running, but, on this night, it was just a matter of following the batted ball.

The fielding: When the Angels signed Josh Hamilton for five years at $125 million during the winter, they didn't take into account that he's not a right fielder. Hamilton looks lost following fly balls out there, especially around the warning track and the fence. Billy Butler's first-inning double plopped down on the warning track. In the fifth, Jarrod Dyson's double hit the wall low enough that the 6-foot-5 Hamilton could have reached it, but he did not play the ball well at all, so it bounced off the wall and then bounced past him on the return. The Angels weren’t right for thinking Hamilton would take over right field just because they signed him for $125 million, but we can at least expect him to look alive out there, and that isn't happening, either.

Strategic moves: Not a lot of gamesmanship or tactical prowess in this one. The Royals just swung the bats.

What now: The Angels fell to 14-24, still fourth in the AL West and ten games behind Texas. The Royals improved to 19-16, third in the AL Central and a game behind Cleveland. They meet again Tuesday night at Angel Stadium. The Angels will go with left hander Jason Vargas (1-3, 4.11), who got roughed up in his last start, a 6-5 loss at Houston on May 9. However, Vargas threw a complete game shutout in his last start at the Big A on May 3 against Baltimore. Kansas City will counter with right hander Jeremy Guthrie (5-0, 2.28), who has 18 straight starts without a loss, a Royals record. Guthrie is going for his 11th straight victory, which would tie him for the club record with Paul Splittorff and Rich Gale.