More than anything else, poor fielding cost the Dodgers in an 8-5 loss Friday night to open a three-game road series against the Atlanta Braves, who lead the National League East. Dodgers left fielder Carl Crawford made two deadly misplays that were mostly responsible for Atlanta scoring six runs, combined, in the sixth and seventh innings. 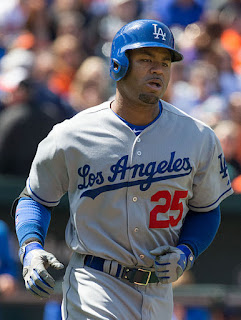 It was a bad night in with the glove for Dodgers left fielder Carl Crawford (Keith Allison/Creative Commons Attribution-Share Alike Generic 2.0 license).

Summary: The Dodgers handed the Atlanta Braves two game-breaking opportunities through poor pitching and poor fielding. The Braves broke the game with them, scoring six times between the sixth and seventh innings, keyed by Justin Upton's sixth-inning grand slam that put them ahead for good.

The pitching: Dodgers starter Hyun-jin Ryu consistently missed with his first pitch fastball, going ball one on the first pitch with 11 hitters using that selection. All four times when Ryu started a hitter with the changeup, that one missed, too. So, Ryu constantly worked from behind, which is why he already had thrown 100 pitches (44 balls) through five innings. Yet, three of those innings were all but trouble free. Ryu walked five and gave up two runs in his five-inning start. It could have been a lot worse, but he left five runners on base, combined, in the first and third innings ... Dodgers reliever Matt Guerrier, who replaced Ryu in the sixth, was the best Dodgers pitcher of the night. He faced three hitters and they all should have made outs, but two of them didn't and they ended up scoring (see below, about fielding) ... Ronald Belisario came in for the seventh and gave up two runs, but, he, too, was let down by the Dodgers defense ...

Atlanta left hander Paul Maholm almost doesn't have enough stuff to hit, topping out in the 86-88 MPH range. But he has that in many flavors, and he mixed them together adroitly against a Dodger lineup that entered the game batting .303 against left handers. Maholm didn't exactly have the Dodgers eating out of his hand, but they had to scratch for most of their runs. They scored a run in the second when Dee Gordon beat out the back end of a double play, added two unearned runs courtesy of an error by Atlanta second baseman Dan Uggla in the fourth, then the Dodgers scored in the sixth and the eighth on solo homers by Scott Van Slyke. So, the Dodgers touched Maholm for eight hits and a walk in his six innings, but the Dodgers didn't explode offensively ... Braves closer Craig Kimbrel, a right hander, appeared for the first time since May 9 and struck out two in his ninth-inning stint, completely overmatching left-handed hitting Carl Crawford and Andre Ethier.

The hitting: The two solo home runs by Scott Van Slyke were the clear offensive highlights for the Dodgers ... Blue had hits up and down the lineup -- except from No. 3 hitter Matt Kemp and cleanup man Adrian Gonzalez, who combined to go zero-for-nine. All five Dodger runs came from the five through seven hitters -- A.J. Ellis, Scott Van Slyke and Luis Cruz. The Dodgers even got a couple hits from the nine hole, one from starting pitcher Hyun-jin Ryu and another from pinch hitter Tim Federowicz ... Kemp and Gonzalez didn't kill rallies, but they didn't get them started, either. In the first and third innings, they came up with a runner on first and one out, only to both make outs to end the innings ... The Dodgers entered the game batting .303 against left handers, despite their 6-7 record against left-handed starters. Friday, the Dodgers were nine-for-34 (.264) against lefties and they scored enough runs to win. But once again, against a lefty, they didn't ...

It's hard to give the Braves too much credit for their hitting. Of their nine hits, four might be called "unearned hits," which either came after two-out errors or resulted from poor defensive plays. But those unearned hits were big, accounting for six runs between them ... The Braves scored two runs on their own in the third inning, with their one through four hitters putting together a sequence ... The big news in the offseason was the Braves acquiring Justin Upton and B.J. Upton, the Upton brothers. But the brothers are very different people this season. Justin Upton is batting third in the lineup, .286 with 14 home runs to lead the National League. B.J. Upton is batting eighth and hitting only .141.

The base running: Nick Punto of the Dodgers had the only stolen base in this game. No one was caught stealing and there wasn't any other action on the bases that didn't result from fielders dropping balls.

The fielding: Until the sixth inning, the Dodgers played a decent defensive game. In the second inning, second baseman Nick Punto made a nice back-handed stop to retire Jason Heyward on a ground ball. Shortstop Dee Gordon was eaten up by Chris Johnson short hop in third for single, but it didn't contribute to any runs ... Dodgers outfielders made back-to-back catches to steal extra-base hits in the fifth. With a man on first and no one out, Scott Van Slyke made a sliding catch at the right field foul line to rob Chris Johnson. The next batter, Brian McCann, hit a smash to center field, but Matt Kemp made a nice, falling catch going to his right ... The Braves didn't score that inning, but they would have scored at least twice if the Dodger outfielders didn't make those plays ...

Then, Braves hitters began peppering the left side of the Dodgers defense, exposing that weakness. With one out in the bottom of the sixth, Braves trailing, 4-2, they sent up Jordan Schafer to hit for pitcher Paul Maholm. Schafer hit a popper to medium left field. The left fielder, center fielder and shortstop all converged. It was left fielder Carl Crawford's play all the way. In particular, there's no way he should defer to the shortstop going back that deep. But Crawford deferred and no one caught the ball. No error marked on the play, but the Dodgers might have made two misplays. The center fielder, Matt Kemp, should have called for Crawford to take it (he might have, but there's no word on if he did or didn't), and Crawford should have caught it ... The next batter, Andrelton Simmons, hit a smash at third baseman Luis Cruz, but Cruz didn't catch it. That was an error. Reliever Matt Guerrier should have been out of the inning, and he wasn't ... Those two errors helped set up a game-turning grand slam by Justin Upton ... In the seventh, with two out and Ramiro Pena on third with a triple, Crawford misplayed a fly ball by Simmons and it fell for a two-base error to score Pena. Simmons then scored on a single by Jason Heyward.

One of the problems with quantifying defense is this: While we can make make reasonable assumptions to reconstruct an inning and decide how much an error costs a team, there is no way to tell how many runs are prevented by a sparkling play. In the fourth, with a man on first, Van Slyke popped one up down the right field line. The first baseman, second baseman and right fielder all chased, and it was Heyward, the right fielder, who came in hard and caught the ball tumbling to the ground. The Dodgers ended up scoring twice in that inning, and it almost certainly would have been more without that catch ... The next batter, Cruz, hit a ground ball to inside of second base, leaving second baseman Dan Uggla to decide whether to make a play on the lead runner at second or the batter at first. But you do have to catch it first, and Uggla didn't field it cleanly. Error. The runners ended up scoring on back-to-back, two-out singles ... In the second inning, Uggla made a nice play in short center field to keep Cruz's clean single from going up the middle, temporarily keeping a run from scoring ... But Uggla did not handle a soft liner in the third inning by Nick Punto, resulting in a hit. Mixed night for him ... In the fifth, Braves shortstop Simmons came up to the infield grass to turn a soft grounder by Ellis into an out.

Strategic moves: One of the easiest second guesses against a manager is for pulling, or not pulling, his starting pitcher. Friday night, Dodgers manager Don Mattingly made the right call by pinch hitting for starter Hyun-jin Ryu in the sixth. Ryu already had thrown 100 pitches. If he were about 20 pitches lower at that point, he has to go up there with two out and no one on to stay eligible for the sixth inning. But his control problems cooked him by then ... Ryu's short stint and high pitch count meant Mattingly was in his pen in the sixth inning. Along with two Dodger errors, reliever Paco Rodriguez walked Heyward on a 3-2 pitch that wasn't even close, loading the bases. Mattingly allowed the lefty Rodriguez to pitch to right-handed Justin Upton, who hit a deep grand slam. Mattingly told reporters after the game that he didn't want to burn up all his relievers so early in the game. Rodriguez already was the second reliever of the inning, and he did finish out the inning before Ronald Belisario came in for the seventh.

What now: The Dodgers fell to 17-23, fifth place in the NL West, still six games behind San Francisco. The Braves are 23-17, still leading the NL East by a half-game over Washington. Saturday night in Atlanta (4:10 p.m. PST), the Dodgers are sending lefty Chris Capuano (1-2, 6.60) against Atlanta's Kris Medlen (1-5, 3.44). Capuano prevailed in something of a training wheels start last weekend against Miami, clearing 6 1/3 innings and allowing only one run by throwing almost nothing but a sinker and a changeup. The Atlanta lineup will be much more challenging. The Dodgers haven't seen much of Medlen lately. He last beat them in June 2010 and last year he faced them for only 2/3 of an inning.