In 2007, the Kansas City Royals traded Billy Buckner to Arizona for Alberto Callaspo. Both of those players now are with the Angels, and it's safe to say the Angels and Royals are going in two different directions. The Angels ran their winning streak to seven Saturday with their third straight win in Kansas City. 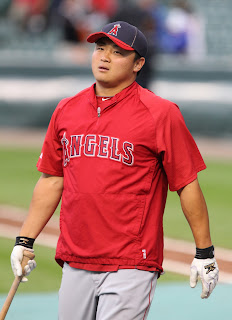 Summary: The Angels won their seventh straight and, for all their offense lately, they would have won this game without a hit. A week ago, the Angels didn't know who would start in this game, and they ended up with five pitchers combining for a four-hit shutout.

The pitching: Billy Buckner made his first start of the year for the Angels, becoming the tenth starting pitcher the club has used this year. Despite a fastball that never touched 90 MPH (according to MLB.com's GameDay feature), Buckner started with strike one on seven of the first ten hitters he faced. In the next two innings, Buckner started seven out of nine hitters with ball one. By the fourth, though, the Angels had a 1-0 lead that Mike Trout manufactured all by himself ...

There were two key at-bats for Buckner, and they both went his way. In the fourth, after Alcides Escobar led off with a single, Buckner immediately went 3-0 on Alex Gordon, Kansas City's best hitter (.337). Escobar had Buckner's attention and the pitcher's concentration was split between the pitcher and the hitter. Gordon swung at a pretty good candidate for ball four, a fastball down, and fouled it off. Then, Gordon fouled off a fastball right through the zone as Escobar ran. Next pitch, Escobar ran again and Gordon fouled off an offering a lot like the last one on 3-2. On the next pitch, a knee-high fastball over the plate, Gordon flied out to medium center field ... Turned out to be big. After Escobar stole on the first pitch to Billy Butler, Buckner pitched around Butler for a walk. Following that, Eric Hosmer hit a line drive right at second baseman Howie Kendrick, then Lorenzo Cain grounded into a force to end the inning.

The other big at bat was the last hitter Buckner faced, Kansas City second baseman Chris Getz with runners at first and third and one out after a double, a walk and a wild pitch in the fifth. Getz fouled off the first three pitches, then, on 1-2, fished at a changeup down and away and pulled it weakly on the ground to Kendrick, who started a double play. Getz argued the call with first base umpire Marty Foster, but he was out ...

Kansas City starter Jeremy Guthrie didn't allow a hit until Hank Conger, who led off the sixth right after the Getz double play, homered with the left field breeze at Kauffman Stadium. The Angels only scored three against Guthrie through seven innings, but they blew up for four runs in the eighth ...

The hitting: Hank Conger's homer in the sixth inning for the Angels came left-handed. All eight homers in the switch hitter's career have come left handed ... Josh Hamilton's batting average remains in the usual neighborhood, .222 now, but he homered in the seventh inning. It was Hamilton's 900th career hit ... Mike Trout set the tone on the bases again for the Angels. In the fourth inning, Trout walked, stole second and took third on a throwing error by Royals catcher George Kotteras, then came across on a ground ball by Albert Pujols, who never had an easier RBI ... Trout scored twice in the game, he now has scored at least twice in five straight games, the longest such streak for the Angels since Don Baylor scored at least twice in seven straight games during the 1979 season ... Trout now has scored 39 runs and is tied with Detroit's Miguel Cabrera for the American League lead ... Mark Trumbo was one-for-four, extending his hitting streak to 10 games ... The Angels were three-for-six batting with runners in scoring position. The Royals were zero-for-five ...

The fielding: Angels shortstop Erick Aybar is really making a lot of high throws, and he made another one in this game, enabling his Kansas City counterpart Alcides Escobar to lead off the fourth with a single ... Otherwise, the Angels were solid defensively ... Third baseman Albert Callaspo came in on a surprise bunt by Eric Hosmer, barehanded it and made the throw to first to beat Hosmer, who slid in head first ... Kansas City third baseman Mike Moustakas responded in the next half of the inning, taking extra bases on the line from Howie Kendrick and throwing him out to end the frame ...

The base running: Mike Trout seems to do this every day. He led off the second with a walk, stole second and took third on a throwing error by the catcher, then scored on a ground ball by Albert Pujols. The ball doesn't have to go very far from second base for Trout to take third without challenge ... In the fourth inning, Kansas City's Alcides Escobar stole third base with two outs against Angels catcher Hank Conger. But the next hitter, Lorenzo Cain, grounded out and the Royals didn't score. Conger later threw out Kansas City's Mike Moustakas trying to steal second base ...

Strategic moves: The Angels were crowing a bit to reporters Saturday about the pitching depth in their organization, and they have a right to it, considering, as manager Mike Scioscia pointed out, that four of the five pitchers in Saturday's shutout weren't on the opening day roster. Those four would be Billy Buckner, Dane De La Rosa, Robert Coello and Michael Kohn. The one pitcher who was around on opening day was Scott Downs ... The Angels starting rotation has an ERA of 1.76 in the last seven games ... The starters in that stretch have included Buckner , who made his first appearance for the Angels Saturday, and Jerome Williams, who didn't enter the rotation until May. That stretch also includes one poor start by Joe Blanton, and one good start by Joe Blanton ... With all that happening, help could be on the way. Jered Weaver is scheduled for a bullpen session Sunday and there have been reports that he might take his next start with the Angels. Also, the Angels are saying that pitchers Tommy Hanson and Kevin Jepsen could be activated this week ...

What now: The Angels now are 22-27, still third place in the AL West, and still 10 games behind Texas. But they have won seven games in a row.  Last year, right at about this time (May 22-29), the Angels won eight straight games, rallying from an 18-25 start to reach 26-25. The streak narrowed their deficit to Texas in the AL West from eight games to 5 1/2 games ... Which just shows how much more poorly the Angels started this year. The present streak began when they were 15-27, 12 games behind Texas ... Kansas City has lost seven straight home games and 15 of their last 19 games overall ... The present run of 19 games began with the Royals down only one-half game in the AL Central at 17-10 through May 5. Next day, the Royals ran into -- ready for this, Angels fans? -- Chicago White Sox left hander Chris Sale. The Royals scored a run in the first against Sale, then Kansas City starter James Shields shut down the White Sox, allowing two hits and striking out nine through eight innings. In the ninth, Kansas City manager Ned Yost, brought in closer Greg Holland to protect the 1-0 lead. Royals fans have since then blamed Yost for making the pitching change, but that's not what cost the Royals the game. They just didn't make a play with two out. Second baseman Chris Getz fielded a ground ball behind second base, but he couldn't feed the shortstop for a force play that would have ended the game as the White Sox scored the tying run. It's been downhill ever since then for the Royals ... Last time the Angels lost a game, Sale beat them, 3-0, in Anaheim on May 17. Five days before then, Sale almost rang them up for a perfect game on a Sunday night, but settled for a one-hitter in a 3-0 victory. The White Sox aren't anywhere this season, but Sale is in the nightmares of the Angels and the Royals ... The Angels will go for the sweep in Kansas City Sunday (11:10 a.m. PDT). The Angels will send right hander Jerome Williams (3-1, 2.53) against Kansas City right hander Wade Davis (3-3, 5.91) ... In addition to everything else going right for the Angels these days, they're about to finish a four-game series in Kansas City without ever seeing Shields (2-5, 2.47).
at May 26, 2013