Paul Goldschmidt hit four homers in three games at Dodger Stadium as the Arizona Diamondbacks swept three straight from the Dodgers. Next up for the Dodgers, the Miami Marlins come to town, and it's an open question which of those two clubs is worse right now. 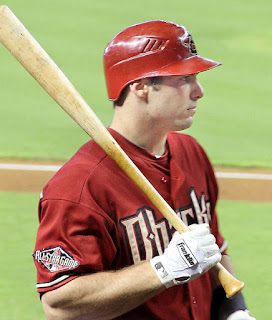 Summary: Arizona slugger Paul Goldschmidt won this game by himself, driving in all three Diamondbacks runs with two homers. An error by Dodgers shortstop Dee Gordon put the other runner on base. Dodgers starter Clayton Kershaw, but for one fastball to Goldschmidt, pitched another fine game.

The pitching: Arizona starter Wade Miley blew through three innings his first time through the Dodgers order. When the Dodgers came back with the top of their order in the fourth, they tagged Miley for doubles by Nick Punto and Adrian Gonzalez, then a single by Andre Ethier. Dodgers led, 2-0. Somehow, Miley ended up outdueling Kershaw in this game. The Dodgers never again put more than one runner on base.

In a very tightly pitched game, neither pitcher could give up anything. Of 68 at-bats in this game, 17 were decided on pitches with hitters ahead in counts, and six of those were 3-2. The 3-2 pitches resulted in a homer, a double, two singles, a walk and a fly out. The hitters counts accounted for seven of the 14 hits in this game -- one-fourth of the at-bats and one-half of the hits. Throw out the 1-0 counts, in which the hitters were one-for-six, and hitters were six-for-11 connecting from ahead.

Both starting pitchers threw strikes -- Kershaw throwing 72 strikes in 104 pitches and Miley throwing 75 strikes in 102 pitches. Kershaw gave up one earned run in seven innings, while Miley gave up two earned runs in 7 2/3 innings. Neither pitcher deserved to lose, and neither one did. Kershaw took a no-decision and his ERA fell from 1.66 to 1.62. Miley took the win to go 3-1 with an ERA reduced to 2.93.

The hitting: As usual, not much to speak of with the Dodgers. Dee Gordon was their big bopper, their only player with two hits. The Dodgers fourth inning had the stuff Dodgers fans might dream about. Gordon led off with a line single to right, then Punto doubled to right and Gordon came all the way around from first. Would have been nice to see Matt Kemp get in on this, but he continues to struggle with runners in scoring position and he flied out on an 0-1 pitch. With runners in scoring position, Kemp has six singles in 35 at-bats (.171) with 12 strikeouts. Gonzalez followed Kemp with a double to drive in Punto. An out later, Andre Ethier singled to left and drove in Gonzalez. That was all the Dodgers could put together for the entire game.

The Diamondbacks actually put together fewer hits, but they were longer. In the sixth, after Didi Gregorius reached on Dee Gordon's error, Kershaw faced Goldschmidt, who was only one-for-16 against him. Kershaw went down and in for a ball, down and away for a strike, then down and away for a ball. The next pitch, a belt-high 92 MPH fastball on the outer half, wound up way into the left field bleachers and resulted in a tie game. At that point, the viewer is thinking that the Dodgers should throw Goldschmidt hard on the hands and tie up his arms so he can't get them around the outside pitch. Kenley Jansen tried that in the eighth inning, a 3-2 fastball on the hands. Goldschmidt hit it over the left field fence to give Arizona the lead.

Dodgers manager Don Mattingly mentioned after the game that it really doesn't matter who pitched to Goldschmidt, who hit four homers in the three-game series. Goldschmidt hit one against Chris Capuano, but he also homered off Brandon League, Kershaw and Jansen. It seems to not matter who is pitching, or even what they throw. In 14 career games at Dodger Stadium, Goldschmidt has six homers and 15 RBI.

The base running: Dee Gordon puts a spring in the Dodgers' step. He's a threat to score from any base. He tore it up scoring from first on Nick Punto's double to right field in the fourth inning. If he can be the offensive player he's been in these five games since he's been up, he's a lift. But we've also seen the bad Dee Gordon, the guy who doesn't seem quite sure what he's supposed to on the bases or in the field. Gordon had a nice at-bat in the fifth against Miley, working a 1-2 count to 3-2, fouling off a couple pitches and hitting a line drive single to right-center field. Then, before Miley even threw a pitch to Punto, he picked Gordon way off first base to end the inning. Which might not have been so bad, except ...

The fielding: ... Gordon apparently took that pickoff with him to the field in the top of the sixth. The leadoff hitter, Gregorious, hit a two hopper to Gordon's right, which the Dodger shortstop olayed as he tried to backhand it. The error put a runner on for the next batter, Goldschmidt, who homered to make it a 2-2 game. Kershaw and Juan Uribe also made infield errors Wednesday night for the Dodgers.

If the Dodgers were merely hitting poorly, they could still be more fun to watch. But they are so dead defensively. You never see infielders diving after balls, nor do you see outfielders charging the gaps. It seems that the Dodgers don't have an outfielder who can get a throw to the infield without wheeling and taking a couple steps, and that's with base runners flying. The Dodgers just don't take charge of what's happening out there when they put their gloves on.

Mattingly has taken some grief for bunting, a lot of it from people who think the actuarial tables prove that bunting is always a bad strategy because it doesn't add up over the long haul. But even Bill James will tell you that you can never partition the tables finely enough make that call. It depends entirely on the situation.

Here's a situation. Skip Schumaker doubled to lead off the ninth against Arizona reliever Heath Bell Wednesday night with the Dodgers trailing, 3-2, at home. The next batter up is A.J. Ellis, followed by Ethier, and Carl Crawford is available as a left-handed pinch hitter. Arizona has two left handers in the pen, but both have worked in the last couple days and neither is probably going to get the ball from Diamondbacks manager Kirk Gibson here no matter what happens.

It's just obvious here that the Dodgers have to get a bunt down, moving Schumaker to third with one out. Suddenly, a closer who collapsed last year has the tying run on third with two good left-handed hitters coming up, and if he throws one in the dirt, the game is tied. Suddenly, an Arizona catcher has worry about a ball in the dirt, and he also doesn't want to call a pitch that can be hit into the air. Suddenly, an Arizona manager has to ask himself how to play the infield, how much he trusts Bell, and if he might trust one of his untested left handers a little more. The whole dynamic changes with that runner on third and one out.

Instead, Mattingly let Ellis hit against the right-handed reliever. Ellis grounded out and Schumaker didn't advance. Next, Ethier struck out when he should have been just trying to put his bat on the ball with a runner on third. Then, Crawford flied out to end the game.

In defense of Mattingly, one might argue that Ethier and Crawford, with the platoon and advantage, might have been able to get the run home with a clean hit between them. Ellis had a five-game hitting streak alive, and maybe his bat had a hit in it. But it is precisely the problem with the Dodgers that they're not hitting, and when you're not hitting, you can't count on hitting. You have to create opportunities in which you can score without getting a hit. The Dodgers failed to do that, and they failed to score, as usual. The decision to not bunt, of course, was unusual. The Dodgers led the major leagues with 82 sacrifice bunts last year.

What now: The Dodgers fell to 13-20, 6 1/2 behind the Giants, who won, 4-3, at home against Philadelphia in 10 innings. The Diamondbacks, 19-15, remain one game behind the Giants, who are 20-14. The Dodgers have lost seven in a row, including the first three of this home stand. They have lost nine of their last 12 games at Dodger Stadium. Miami comes in this weekend, and the Marlins, 10-25, are playing no worse than the Dodgers. Friday night, the Marlins will send up 20-year-old right hander Jose Fernandez (1-2, 3.48), who threw seven innings of one-hit shutout pitching with nine strikeouts last week in Philadelphia. The Dodgers will come back with Matt Magill, who gave up five runs without getting five hitters out in his start last week at San Francisco.