Jordan Zimmermann might be the hottest pitcher in big league baseball. He shut down a potent lineup for the third straight time Wednesday, leading the Washington Nationals to a 3-1 win against the Detroit Tigers. Zimmermann now is 6-1 with a 1.59 ERA. 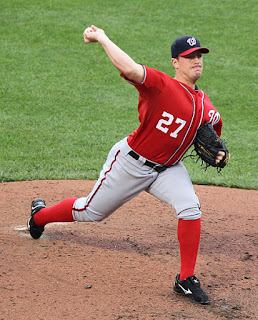 Summary: Zimmermann survived a sketchy first three innings and lasted seven, allowing seven hits and two walks for the win. He improved his record to 6-1 with a 1.59 ERA. Bryce Harper hit a solo homer and a sacrifice fly to lead the Washington offense.

The pitching: Zimmermann entered the game with wins of 1-0 against Cincinnati and 2-0 against Atlanta before shutting down the tough Detroit lineup. Zimmermann went almost exclusively with a four-seam fastball and slider, telling reporters that his changeup and curve didn't feel right. Zimmerman slogged through tough times early. After the Detroit leadoff hitter, Austin Jackson, lined out to right to start the game, Torii Hunter reached on an error by Washington first baseman Adam LaRoche. The Tigers usually make the pitcher pay for errors, and Miguel Cabrera made a bid to do it, but his line drive was caught by shortstop Ian Desmond going to his right. Hunter, who had to think the ball was going through, was thrown out off first base by Desmond.

Fielder led off the second against Zimmermann by smashing a curve off the center field fence for a double. But Andy Dirks and Jhonny Peralta each beat pitches into the ground for outs and Fielder didn't advance before the Tigers were out of the inning. With two out in the third, Hunter doubled to left off a slider and Cabrera ripped a fastball into right field to drive in Hunter. But Zimmermann worked out of it by walking Fielder and striking out Dirks swinging at a slider. After that, Zimmerman cruised through the next four innings, giving up three hits and retiring the side in order twice.

Sanchez entered the game 8-0 lifetime against the Nationals and he deserved a better fate in this one. One of the runs against him scored on a sacrifice fly, another scored on an unlikely homer and another scored on a throwing error. Sanchez worked around a couple infield hits in the second inning against the Tigers defense, which is never quite tight. The infield hits loaded the bases with two outs, but Zimmerman was due up and he grounded into a force out. Sanchez pitched well enough to win, but he didn't receive enough offensive or defensive support from himself or his teammates

The hitting: Starting Harper with soft stuff isn't always the best idea. In the third, Harper batted with one out and Denard Span on third after triple. The Tigers played the infield up and Sanchez threw a changeup (86 MPH), hoping for a ground ball. Instead, Harper lifted it into left field for a sacrifice fly, giving the Nats a 1-0 lead. In the fifth, Sanchez started Harper with a curve (81 MPH), which Harper deposited into the right field seats to give the Nats a 3-1 lead. Detroit catcher Alex Avila told reporters that it was the first curve Harper saw in the game, adding that one doesn't normally expect that first curve of the game on the first pitch of an at-bat to leave the yard. Most hitters aren't looking for the curve ball there. But Nationals manager Davey Johnson said in his postgame press conference Harper doesn't have to go up looking for the curve because he tracks the ball so well that he can adjust quickly. Harper is hitting .313 with 10 homers and 20 RBI.

The base running: You wouldn't expect LaRoche to beat Hunter's right field arm from second to third, and that's not exactly what happened in the fourth inning, either. With runners at first and second and one out in the Washington fourth, Kurt Suzuki flied out to Hunter in medium right. Surprisingly, LaRoche took off for third. Hunter made a strong throw, but it bounced off the infield grass by the third base cutout, struck LaRoche's arm on the way up and caromed over third baseman Cabrera's head. Sanchez admitted to being late backing up the play. The ball went into a camera well attached to the third base dugout and LaRoche was awarded a base for the overthrow, which plated him to give the Nats a 2-1 lead. LaRoche explained to reporters after the game that he took the chance because Zimmerman was due up with two outs, so third base was worth a try. That aside, forcing the Tigers to throw the ball around is never a bad strategy, though it didn't always work. In the first inning, Span got himself picked off at first base by Sanchez after starting the game with a single.

The fielding: Besides Sanchez not backing up Hunter's throw at third, the Tigers had some other moments. Span's single fell between the shortstop, left fielder and center fielder. The Tigers had a play on third against Span when he tripled in the third, but second baseman Omar Infante's relay from right wasn't even close, forcing Cabrera well up the left field line. Two straight infield hits in the second could have cost the Tigers, but they didn't. With two out and a runner on first in the Washington second, Danny Espinosa bunted in front of the plate and Avila couldn't pounce in time to throw him out at first. Next up, Suzuki hit a soft single that never passed the infield grass in front of shortstop. The bases were loaded. Both are tough defensive plays, especially the second, but the Tigers don't have defensive playmakers at those positions. The Tigers got out of it, anyway. Zimmerman, the next hitter, batted into a force out to end the inning.

Strategic moves: On April 26, Zimmermann threw a complete game, 1-0 shutout at the Reds, giving up four hits and throwing just 91 pitches. On May 1, Zimmermann threw eight shutout innings at Atlanta, allowing two hits and striking out eight in 107 pitched. Wednesday, Zimmerman was at 101 pitches, 72 strikes, through seven innings. Johnson said he thought about sending Zimmermann against the Tigers in the eighth, but, because of a Tuesday rainout, Zimmermann was on a week of rest instead of the usual four days. The first Tigers due up in the eighth were Cabrera and Fielder. So, Johnson just went to the pen for fresh arms -- Tyler Clippard in the eighth and Rafael Soriano in the ninth. It worked, as it usually does.

Clippard gave the Tigers a chance in the eighth, walking Dirks and Peralta with two out and Avila coming up. Avila hit a two-run homer in Houston to beat the Astros last Friday night. The left-handed hitting catcher also is batting .186 -- .211 against right handers and .067 against lefties. Tigers manager Jim Leyland said in the Detroit Free Press that he probably would have sent Victor Martinez up against a left hander, but, in this case, he said he hoped Avila "runs into one" like he did in Houston. Avila struck out swinging at a 94 MPH fastball from Clippard, but Leyland said he was satisfied that Avila got a couple good swings.

What now: Washington (18-15) remains two games behind Atlanta, which beat Cincinnati, 7-2. Detroit (19-12) remains 1 1/2 games ahead of Kansas City, which lost to Baltimore, 5-3. The Tigers remain an impressive 8-4 against clubs at or above .500. The Nationals are 9-12 against those teams. The Nationals and Tigers will finish off this rain-shortened, two-game series Thursday (1:05 PST). The Tigers' scheduled starter, Doug Fister (4-0, 2.48) hasn't thrown a clunker all year. Washington starter Dan Haren (3-3, 5.01) has thrown some clunkers, but he lasted a combined 14 innings in his last two starts against good hitting clubs (Cincinnati and Atlanta), allowing only three earned runs.