Kenley coughs it up: Atlanta 3, Dodgers 1

The Dodgers couldn't hold a slim lead Saturday in Atlanta and lost, 3-1, when reliever Kenley Jansen couldn't outwit the pinch hitter he came in to face, Evan Gattis. The pinch hitter's homer turned a 1-0 Dodgers lead into a 2-1 Braves lead in the eighth inning. Ball game. 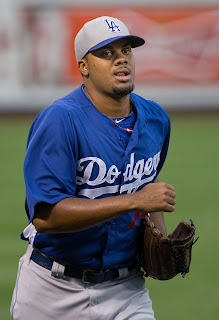 Summary: The Dodgers might have stolen a 1-0 win with an unearned run, but they ended up giving it back because their relief pitcher couldn't outsmart Atlanta's pinch hitter.

The pitching: We could recite all the bromides about pitching, but Saturday's Dodgers loss in Atlanta illustrates them well enough. Starting pitcher Chris Capuano repeated the plan he used to shut down the punchless Miami Marlins earlier in the week, and it worked just as well against the power-hitting Braves. Capuano threw a sinker in the high 80s and a change in the high 70s, moving them around and mixing in an occasional slider for seasoning. The Braves managed only five hits against him in 7 1/3 innings, and he didn't walk anyone ... When he was through, leading, 1-0, with one out and a runner on first in the eighth, the Dodgers brought in Kenley Jansen, who threw hard, but that was all he threw, and that was the problem. Against the pinch hitter Jansen came in to face, Evan Gattis, Jansen threw cutter after cutter after cutter after cutter. Eight of them. On 2-2, Gattis fouled off three of them, straight back. He was timing the cutter and getting on top of it. All of these pitches were the same speed, 92-94 MPH, and the same basic break. It was only a matter of time. And, while you were begging for Jansen to throw Gattis something off speed, he dialed up another cutter, and Gattis crushed it. Home run. Braves, 2-1 ... Then the next hitter, Andrelton Simmons, got a first-pitch cutter, and he hit it into the seats. Braves, 3-1 ...

We don't know what the Dodgers discussed with regard to pitching Gattis when Jansen entered the game, but we have to assume that some of the responsibility goes on the rookie catcher, Tim Federowicz, whose job it is to call the pitches. Federowicz caught Capuano in the lefty's two starts this week and pulled off the simple sinker-changeup plan. Unfortunately, his calls for Jansen were even simpler -- cutter after cutter after cutter. It cost the Dodgers a ball game. Perhaps the rookie was just following instructions, but if those were his instructions, that's an even bigger problem ... [UPDATE] This morning, courtesy of MLB.com's Ken Gurnick, we received clarification from Dodgers manager Don Mattingly concerning Jansen's pitch selection. Here is the money quote from Mattingly: "You want him to pitch to his conviction, but he pitched right into (Gattis') strength. (Catcher Tim Federowicz) called a slider, he didn't want to throw it. He called for a fastball away, he wanted to come inside. For me, (Federowicz) has to go out and make sure. If he says, 'I can get this guy inside,' that's his conviction ... But make him beat you in the big part of the park. If you go away, and he goes to center field or right-center, it's easier to take than going to the guy's strength. He gave up a home run and basically gave up the game." [END UPDATE]  ...

Last season, Atlanta starter Kris Medlen was 10-1 with a 1.57 ERA. Apparently, he has to pitch that well to win a ball game. Saturday, Medlen gave up but one unearned run and two hits in seven innings, and he still couldn't get a win. Medlen mixed two different fastballs with a curve and a change to very good effect ... Except for the effect on his record. Medlen now is 1-5 with a 3.02 earnie. The man is pitching in tough luck.

The hitting: As we saw Saturday, Atlanta's Evan Gattis isn't in the big leagues because he sat in a pickup truck for three years without playing baseball. He's up because he can hit a fastball. He caught a break when the Braves had to start the year with catcher Brian McCann disabled and they needed a catcher. Gattis won the audition in spring training and hit so well that the club had to keep him when McCann was ready to play again ... His homer against Kenley Jansen was his eighth of the season … Atlanta's Chris Johnson was the only multi-hit performer against the Dodgers' Chris Capuano Saturday, going three-for-three. All three of his singles came off changeups. Johnson now is batting .339 ... Not much to speak of with respect to the Dodgers' hitting. Only two hits for the entire game.

The base running: Not many base runners in this one, so there wasn't a lot of base running. In the third, with two out and Matt Kemp batting, Dee Gordon tried to steal third base for the Dodgers, and he was thrown out. It took a perfect play to get him. One hates to see the final out of the inning at third base. But, the way this season has gone for the Dodgers, the final out was just as likely to be made in the batter's box ... [UPDATE] Here is what Mattingly said this morning about that stolen base attempt, courtesy of MLB.com's Ken Gurnick: "The first year (Gordon) was here, you want to be patient with him and you're always teaching, but yesterday, we've been there before, and I told him when he got to the dugout that you can't run there unless you're 100 percent ... You're in scoring position already. Matt Kemp's at the plate. Come on, Dee, we've been there. There's no real upside to stealing the base. Only an infield hit or a passed ball. It doesn't make any sense to me. It's just a mistake you really can't make. I don't want to come down on Dee. He's trying. But it's just not the right time to steal a base. It's a useless base." [END UPDATE] ... Sounds like Matty is a little frustrated with his guys, and you can't blame him ... In this corner, we're less upset with Gordon's stolen base attempt than with Jansen's pitch selection.

The fielding: The Dodgers would not have had a lead to protect for so long without Matt Kemp's nice catch at the center field wall in the first inning. Kemp took a solo home run away from Atlanta's Jason Heyward on a ball that was over the yellow line on top of the fence when Kemp caught it ... Braves catcher Brian McCann made a perfect throw in the third inning to nab the Dodgers' Dee Gordon trying to steal third base ... The Dodgers countered with a sweet double play in the third, started by Nick Punto, who came in and to his left on a ground ball by Andrelton Simmons and shuffled underhand to Skip Schumaker at second base. Because the runner coming from first was the Atlanta pitcher, Kris Medlen, there wasn't a lot of interference for Schumaker, who completed the double play with a strong throw to first. Medlen came in straight, but not especially fast ... The Dodgers scored their only run, unearned, in the fourth, when Atlanta left fielder Justin Upton mishandled Schumaker's ball in the left field corner for an error that allowed Adrian Gonzalez to come all the way around from first base.

Strategic moves: Dodgers manager Don Mattingly long resisted batting Dee Gordon in the eight hole, and his reasons were sound. Gordon ends up there at times, but one can see why it doesn't work. First, Gordon isn't good enough at reaching base with two out to get the pitcher out of the way for the top of the order next inning. Second, even if Gordon does get on with less than two out, the ball club ends up using an out in the pitcher's spot and moving him up, but then one hates to take the bat out of a hitter's hands by risking an out on the bases. So, Gordon’s speed ends up wasted … In the third inning Saturday, Gordon led off by being hit by a pitch. Chris Capuano bunted Gordon to second for the first out. Then, Carl Crawford flied out to right field, but not far enough to advance Gordon against the strong-armed Jason Heyward. So, with two out and Matt Kemp batting, Gordon attempted to swipe third and was thrown out in a close play, ending the inning ... True, one hates to take the bat out of Kemp's hands. However, with runners in scoring position this year, Kemp doesn't really have a bat in his hands. With runners in scoring position this year, Kemp is seven-for-40 (.175), all singles. Gordon certainly could have scored from second on a single, but there are a lot more ways home from third. If the big bats were driving runners home, Gordon could easily be chastised for trying that steal, but the way it is now, that's not so obvious ... Here's an idea: when Gordon reaches from the eight hole, especially leading off an inning, give him a couple pitches to run before the pitcher gets a bunt down. Then, if he succeeds, the bunt moves him to third with one out, and even the Dodgers should have an excellent chance to score under those circumstances ...

Doubt if anyone is second-guessing Mattingly for his pitching choices Saturday. He let Capuano bat in the eighth so he could pitch to Dan Uggla to start the Braves' next inning. Uggla, four-for-24 lifetime against Capuano to that point, flied out to start the eighth for Atlanta. When the next batter, slumping B.J. Upton, hit a clean single, Capuano was up to 91 pitches and Mattingly called for Kenley Jansen from the pen. Obviously, the Dodgers didn't have a very sharp pitching plan for Jansen against the pinch hitter, Evan Gattis (see above, under "The pitching).

What now: The Dodgers dropped to 17-24, fifth in the NL West, seven games behind the new outright division leader, Arizona. The Braves, at 24-18, padded their lead in the NL East to 1 1/2 games ahead of Washington ... Saturday's loss for the Dodgers guaranteed that they would lose their first series in Atlanta since Don Mattingly became their manager in 2011 ... The final game of the series Sunday (10:35 a.m. PDT) is looking like a pitching mismatch in Atlanta's favor. The Braves are sending lefty Mike Minor (5-2, 2.75) against right hander Matt Magill (0-0, 6.92) ... The Dodgers are batting .300 against left-handed pitching this year, but they're only 6-8 in games started by opposing left handers ... Rain was in the forecast for Atlanta all day Sunday.