Washington Nationals manager Davey Johnson threw a "what the heck" lineup out there Tuesday night at Dodger Stadium, and Dodger left hander Clayton Kershaw did what he's supposed to do against a group like that. He shut it down, striking out 11. 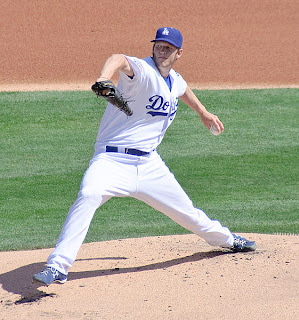 Clayton Kershaw's 2.70 lifetime ERA is the best of any starting pitcher in the major leagues since 1920 after he blew through a rag-tag Washington lineup Tuesday night at Dodger Stadium (SD Dirk/Creative Commons Generic 2.0 license).

Summary: Washington starter Dan Haren was next to unhittable, but Dodgers starter Clayton Kershaw was even better against a patchwork lineup created by Nationals manager Davey Johnson, apparently in the belief that his real players wouldn't hit Kershaw, anyway.

The pitching: Los Angeles starter Clayton Kershaw threw 29 pitches in the first inning and loaded the bases with two outs before striking out Tyler Moore. After that, Kershaw blew the Nationals away, piling up strikeout after strikeout with a psychedelic curve ball. Only two runners for the rest of the game made it to second base against Kershaw. So, four runners reached scoring position against Kershaw, but none of them scored. He struck out 11 hitters and walked one, allowing five hits in 8 2/3 innings. Washington starter Dan Haren allowed only three runners to reach scoring position, but two of them scored. Haren allowed four hits in seven innings, striking out four and walking no one.

The hitting: So, was the pitching that good, or was the hitting that bad? In the case of Haren against the Dodgers, the pitching definitely was that good. For all their trouble scoring runs and their 2-9 May record entering the game, the Dodgers also were batting .290 in May, third best in the major leagues. Haren all but shut them down. The Dodgers got one big hit, Andre Ethier's two-out single with runners on second and third with two outs in the third inning. The hit knocked in both Los Angeles runs ... On the other side, Kershaw against the Nationals, it's not as if he were facing a championship lineup. With Bryce Harper feeling nauseous after running into the right field wall Monday night and right fielder Jayson Werth already injured, Nats manager Davey Johnson also sat center fielder Denard Span against Kershaw. The Nats outfield ended up being Steve Lombardozzi in left, Eury Perez in center and Tyler Morse in right. The Nats catcher against Kershaw, Wilson Ramos, is another backup. So, Kershaw didn't face the team picked to win the NL East, but he also did what he should have done against such a lineup. He shut it down ... The only exception against Kershaw was Ryan Zimmerman, who picked up the majority of Washington's five hits with a three-for-four night. Lifetime, Zimmerman is seven-for-13 (.538) against Kershaw ... The difference in hitting for this game was simple. With runners in scoring position, Washington was zero-for-four and the Dodgers were one-for-four.

The base running: In the National League, where the pitcher is some kind of an offensive player, it's always worth noting the effect of running the bases on a starting pitcher. Leading off the third, Clayton Kershaw took a broken pitch off his right foot and went to first base. Kershaw took second on Matt Kemp's single, then advanced to third on a wild pitch. Kershaw scored on Andre Ethier's single. Running the bases didn't bother Kershaw, and might have invigorated him. At the moment Kershaw crossed the plate, he took the lead. And, after that, he retired 17 of the next 18 batters he faced.

The fielding: It's too bad Nick Punto doesn't hit very well, because he usually plays a nice third base. Unfortunately, because he doesn't hit well, Punto has to be a utility player to stick. So, he ends up playing some second base, where he's not very good. But he was at third Tuesday night, and he made a nice play there, coming up the line on a bouncer by Washington's Ian Desmond to field it and throwing to first in time for the out. There's always a lot of chatter about who should play third base for the Dodgers, but if you just want to take care of the defensive side, Punto is good enough.

Strategic moves: Dodgers fans booed loudly when manager Don Mattingly came to the mound with two out in the ninth after Washington's Ian Desmond singled against Los Angeles starter Clayton Kershaw. The Dodger left hander was brilliant, but he was up to 132 pitches and had to be exhausted. Mattingly let Kershaw start the inning against Ryan Zimmerman, and Kershaw got him out for the first time all night with a fly out to right field. Mattingly pointed out that he would have been compelled to lift Kershaw if Zimmerman came up in the eighth, because that would have made Zimmerman the tying run, Zimmerman already had three hits and the Dodgers simply could not let this one get away … Dodgers fans were glad to see Kershaw replaced by Kenley Jansen, rather than Brandon League, who appears to have lost his closer status. Jansen struck out Tyler Moore (no relation to Mary Tyler Moore) to end the game.

What now: The Dodgers are 16-22 with three wins in their last four games, still fifth place in the NL West, but bringing themselves to within 6 1/2 games of San Francisco. Washington is 21-18, still second in the NL East and still one game behind Atlanta ... Kershaw reached 1,000 career innings with the first out Tuesday night, making him eligible for several career records where the rate stats are concerned. His lifetime ERA of 2.70 after the game makes him third all-time among big league pitchers since 1920, the start of the live ball era. He trails only Mariano Rivera (2.21) and Hoyt Wilhelm (2.52), two relief pitchers ... For 2013, Kershaw's ERA is 1.40, best in the major leagues ... Wednesday night at Dodger Stadium, blue is bringing back right hander Zack Greinke (1-2, 1.59), who will pitch for the first time since fracturing his left clavicle in the infamous confrontation with Carlos Quentin on April 11 in San Diego. The Nationals will start lefty Ross Detwiler (2-3, 2.53).