St. Louis right hander Lance Lynn threw almost nothing but four-seam fastballs at the Dodgers Friday night, and struck out Dodger hitters like they didn't know it was coming. With nine strikeouts in six innings, Lynn notched an easy 7-0 win. 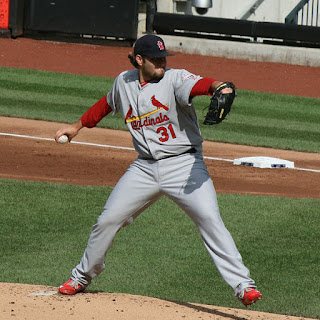 Summary: Nothing fancy about this Dodgers loss. St. Louis starting pitcher Lance Lynn just showed them the fastball, and they just couldn't hit it.

The pitching: In his last two starts, Dodgers left hander Chris Capuano had Tim Federowicz behind the plate and stymied Miami and Atlanta by mixing together sinkers and changeups. Friday, with Federowicz sent down, the Capuano worked with the Dodgers' regular catcher, A.J. Ellis, and the magic wasn't there. The pitching plan changed. In most at-bats with more than one or two pitches, Ellis called for at least one four-seam fastball, and Ellis also was more likely than Federowicz had been to call for a curve (all this, from the date on MLB.com's GameDay feature). Anyway, ‘twas a highly ineffective night for Capuano, who gave up six runs (five earned) in five innings ... The first three big blows for the Cardinals -- David Freese's RBI double in the second, Allen Craig's hard two-run double in the third and Craig's solo home run in the fifth -- all came off Capuano changeups ... The last of those gave the Cardinals a 4-0 lead ...

You almost couldn't have a simpler pitching plan than the game Cardinals starter Lance Lynn threw at the Dodgers. Just throw the fastball. In his six innings of work, Lynn threw 77 pitches -- 67 four-seam fastballs, seven curves and three sliders. In his first three innings, Lynn threw 40 pitches, all four-seam fastballs. In the fourth, Lynn came out with six straight curves, and got two hitters out that way, then went right back to the fastball. He struck out nine in six innings that way, allowing only two hits ...

The hitting: For the Dodgers, not much. Just three hits all night. The Dodgers were no match for Lance Lynn's ubiquitous four-seam fastball, which ranged between 92-95 MPH ... The Cardinals only totaled six hits, but four of them went for extra bases ... David Freese sat out all three games the Cardinals played at San Diego during the midweek after lacerating his right thumb making a tag on Sunday. Back in the lineup Friday, Freese responded with a double, a homer and three RBI in three at-bats ... The Cardinals were one-for-seven batting with runners in scoring position, and the Dodgers were zero-for-two ... We probably shouldn't be too surprised that the Cardinals lit up Dodgers starter Chris Capuano as they did. Here are some career numbers for Cardinal hitters against Capuano through Friday's game: Matt Carpenter, four-for-eight with a homer; Craig, seven-for-11 with two homers; and Freese, six-for-10 with a homer ...

The fielding: Carl Crawford sometimes looks like he just loses track of the ball in left field for the Dodgers. Friday night, in the first inning, he appeared to give up too quickly on a fly ball by David Freese that went off the fence for a double. With two out and a runner on first, Crawford gained nothing by playing it off the wall ... But Crawford didn't make, by any means, the only Dodgers defensive violation of the inning. The runner who was on first, John Jay, reached because Dodgers first baseman Adrian Gonzalez threw behind pitcher Chris Capuano covering the bag on a grounder to the right side. That should have been the third out of the inning ... On Freese's double that was under-played by Crawford, the left fielder threw to shortstop Nick Punto, who relayed to A.J. Ellis covering home against the on-coming Jay. Punto's throw was right there and Ellis was right there blocking the plate. However, as the ball skipped up toward Ellis, it his Jay's foot, and the runner was safe. The official scorer marked it as an error against Punto. Tough call … In the third inning, Crawford dropped Allen Craig’s double trying to pick it up off the warning track, and Carlos Beltran scored all the way from first base …

The base running: John Jay collided with Dodgers catcher A.J. Ellis at home plate on a double by David Freese in the second inning to score the first Cardinals run. Ellis was knocked out for a little while, but it was a clean play by Jay, who slid in straight ... After Carl Crawford singled to lead off the game for the Dodgers, he was out by just a little less than a mile trying to steal second. The throw by Cardinals catcher Yadier Molina was right there. Molina is one of the best, throwing out 44 percent (225-for-507) attempting base stealers in his career, during which the National League average is 28 percent. This year, Molina is nine-for-23 (39 percent) ...

Strategic moves: Wondering if maybe the Dodgers shouldn't go back to the sinker-changeup program when Chris Capuano is pitching. Remembering the rationale provided by Capuano before his start against Miami a couple weeks ago, he said he looked that day to just execute his pitches and not worry too much about the hitters' weaknesses. Friday night, the Dodgers got back to being tricky with Capuano. But the sinker-changeup plan also worked against Atlanta, which has a tough lineup, so it worked better than the more complex formula Capuano threw at the Cardinals. Does mixing in four-seam fastballs and curves take some of the burrowing action off his sinker or some of the drop from his changeup? Don't know ...