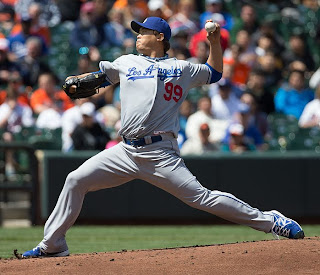 The pitching: Dodgers starter Hyun-jin Ryu struggled with his control and velocity in the first two innings, during which he usually fell behind hitters, regardless of what he threw, and allowed three singles to go along with a walk. But he dialed up opportune ground balls, such as an inning-ending double play from Jonathan Lucroy with runners on first and second in the first inning, then an inning-ending grounder from Jeff Bianchi with a runner on third in the second inning. It had to help Ryu that his own hitters came through for him in the early innings, especially with a five-run second inning that gave him a 6-0 lead. A night earlier, we saw Dodgers consistently fail to hit with runners in scoring position through the early innings, and this was little help to Zack Greinke, who pitched under stress all night from his hitters failing and couldn't make it through the fifth inning. Ground balls produced 11 of the 22 outs that Ryu pitched ... Brandon League actually pitched the ninth without anyone scoring, but he came in with a 9-2 lead, so, uh, good for him ... He did get the Brewers to hit three ground balls, though ...

The Brewers had little hope with Wily Peralta, although the right hander was consistently 95-96 MPH with his fastballs. In the second inning, after Carl Crawford and Mark Ellis bashed first-pitch singles and Adrian Gonzalez reached on a fielding error, Peralta declined to test the strike zone and issued back-to-back, bases-loaded walks to Scott Van Slyke and Nick Punto, capping a five-run inning. Peralta allowed seven runs before he could get six outs. It figured that even the Dodgers could hold that lead ... The Brewers are on the bottom of the National League with a 4.53 staff ERA ....

The hitting: The Dodgers finished the day with 12 hits -- 10 of them were singles. They bunched five of them together with two walks and an error to score five runs in the second inning. They actually hit a bit with runners in scoring position (six-for-15) this time, but it was hardly a landmark performance against the National League's worst pitching staff ... Matt Kemp singled with a runner on third in the first inning Wednesday, going one-for-two with RISP for the game. This season, he now is .177 (eight for 45) with RISP. Eight singles ... Andre Ethier, who sat Wednesday, is eight-for-41 (.195) and a homer with RISP ... Ethier's replacement Wednesday, Scott Van Slyke, was two-for-four with a double and two RBI ... Dodgers pitcher Hyun-jin Ryu wore a zero for four collar Wednesday, dampening what has been a pretty good season at the plate between himself, Clayton Kershaw and Zack Greinke as starting pitchers batting ninth. Between them, the three now are .245 (13-for-53) with a homer and five RBI ... As the day began, the three were a combined .253. Six American League teams were getting lower batting averages from their designated hitters -- Cleveland (.247), Oakland (.246), Detroit (.237), Chicago (.226), Houston (.207), Tampa Bay (.187) and Baltimore (.160) ... In fact, the AL average across the league for designated hitters was only .251 ... Even crazier, the NL was getting a .284 average from its designated hitters in inter-league games ...

The base running: One of the upsides to playing against the Brewers is that you get to run against their catcher, Jonathan Lucroy. Wednesday, the Dodgers were two-for-two stealing against Lucroy, and the Dodgers didn't even play Dee Gordon in this one. Carl Crawford and Matt Kemp swiped those bases. For the season now, Lucroy is only two-for-20 throwing out base stealers, 10 percent. The league average is 30 percent ... By contrast, Dodgers catcher A.J. Ellis, who sat Wednesday, has been the NL's best at killing base thieves, 11-for-24 (45.8 percent). His replacement Wednesday, Ramon Hernandez, failed against the only Brewer who tried stealing against him. It was no one other than Lucroy. But Hernandez still is two-for-four this season ... We all know, of course, that the pitchers are vital as to whether their teams do or don't control the opposition's running game ...

The fielding: Nick Punto made an error for the Dodgers at shortstop Wednesday, and there's no apologizing for that, but he's one guy on this team about whom there is no question about his effort and alertness, so ... Remembering Tuesday, Punto couldn't handle hard short hop from Jeff Bianchi and everyone was safe, including Milwaukee's Carlos Gomez at third. Right away, though, Punto blocked a wandering Gomez off third base, took a pickoff throw from Matt Guerrier and made the tag for the out ... Good baseball play. The man redeems himself ... However, Brewers infielders Rickie Weeks and Jean Segura were beyond redemption Wednesday. Between them, their fielding misplays in the second inning cost the Brewers four runs and took them out of the game. With the bases loaded and one out, Dodgers leading only 1-0, Carl Crawford hit a routine ground ball to the left of Weeks, playing second base. It appeared that Weeks had a double play on his mind, but he didn't pick it up first. Instead, the ball bounced right past him, allowing two runs to score. The official scorer in Milwaukee, a soft touch, ruled it a base hit. The next hitter, Mark Ellis, singled, loading the bases. Then, Adrian Gonzalez hit a ball slightly to shortstop Segura's right. Segura, too, had a double play cooking, but he booted it, allowing another runner to score and keeping the bases loaded. Brewers pitcher Wily Peralta, apparently succumbing to the uselessness of getting ground balls, walked two more hitters to force home two more runs, capping a five-run inning .. In the sixth, Segura and Brewers center fielder Carlos Gomez let a simple popup fall between them ...

Strategic moves: We all want Dee Gordon to succeed, because his speed is a nice dimension for the Dodgers' offense. Sadly, his mental errors are destructive. Dodgers manager Don Mattingly sat Gordon Wednesday after the shortstop made the worst squeeze bunt imaginable on Tuesday. Gordon bunted the ball right back to the pitcher, who had an easy play at the plate on Andre Ethier coming in from third ... There's talking among the Dodgers brass about bringing up outfield prospects Joc Pederson and Yasiel Puig from Class AA Chattanooga. Probably not a good idea. They can't develop without playing, and it's not obvious where they would play for the Dodgers. The Dodgers certainly aren't going to sit Carl Crawford, the best of their outfielders right now, and that leaves only Matt Kemp and Andre Ethier to be seated. Implausible ...

What now: The Dodgers improved to 19-26, still fifth in the NL West, but they gained a game on first-place Arizona, which lost to Colorado, so they are six games down. Milwaukee is 18-27, fifth in the NL Central and 11 down to St. Louis, pending the Cardinals' result at San Diego later in the day ... The Dodgers return to Los Angeles to play the Cardinals in a weekend series that begins Friday. Opening up that series, the Dodgers have scheduled left hander Chris Capuano (1-2, 4.84) against St. Louis right hander Lance Lynn (6-1, 3.27). Capuano is coming off two straight quality starts, during which he allowed a combined two runs in 13 2/3 innings against Miami and Atlanta ... The Cardinals lead the NL Central and have the best record in the National League, 29-16 entering Wednesday's games ... The Dodgers are done with Milwaukee for the year, winning four of six from the Brew Crew. Milwaukee won six of seven meetings between the two clubs in 2012 ... Teams playing against the Brewers this year apparently get better against them with familiarity. The Brewers are 8-8 in the first game of a series, 8-8 in the second game, 3-10 in the third game and 0-2 in the fourth game.