Chicago left hander Chris Sale posted another gem against the Angels Friday night, and he now has shut them out in 16 2/3 innings over his last two starts. The result was a 3-0 win for the White Sox and a second straight hard-luck loss for Angels left hander C.J. Wilson. 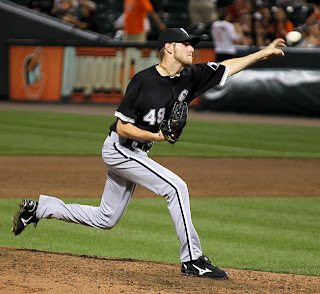 Summary: Chicago left hander Chris Sale tossed his second scoreless start at the Angels this week, which made solo homers by Alex Rios and Adam Dunn sufficient for the White Sox to win. The Angels had absolutely no margin for error in this one, but they fell behind right away and they stayed behind.

The pitching: After throwing a one-hit shutout at the Angels this past Sunday night, when he flirted with a perfect game, Chicago left hander Chris Sale allowed only three hits in 7 2/3 innings Friday night to shut down the Angels. Sale flies all over the place, comes down almost side-armed, appears to put a lot of pressure on his left elbow and might not be long for this world mechanically. At this point in his life, though, his fastball comes in at a hard 95 MPH and his breaking pitches have devilish spin. Not even veteran right-handed hitters look comfortable against him, and left-handed hitters can't touch him. Left-handed batters are three-for-48 against him this year ... Sale now has 23 consecutive scoreless innings in his last three starts.

Angels starter C.J. Wilson has pitched well enough to win in his last two starts, but his opponent each time was Sale, who's just too much for Angels hitters. Wilson probably would like to have back the 0-2 cutter he threw to Alex Rios with two out in the first inning. Rios hit it over the fence for a 1-0 Chicago lead ... The White Sox scored their other run against Wilson on a preventable single, followed by a base advance by the White Sox with aggressive base running, then a clean single ... Angels reliever Garrett Richards gave up a solo homer to Adam Dunn, so he has allowed a run in each of his last two appearances after three straight scoreless outings. However, because his last two appearances were two innings each, he actually has brought his ERA down slightly in those games, from 4.81 to 4.78.

The hitting: The Angels put Mike Trout on third with two out in the first, and they put Mark Trumbo on second with one out in the fourth. Neither scored and the Angels mounted no other threats ... In the first instance, Trout walked, then, on a 1-0 pitch, took third on a stolen base and a throwing error with Trumbo batting. Trumbo didn't get the run in, but he can't be faulted for that because he walked on four pitches. After the stolen base and throwing error, Sale threw Trumbo two pitches high and outside the strike zone to complete the walk. With the runner on third, Sale just didn't want to pitch to Trumbo, who entered the game three-for-six against the left hander. Trumbo ended the night one-for-two with a walk against Sale. Next up came Josh Hamilton with an interesting at-bat. Sale started him with three sliders -- a called strike, a foul ball and a ball in the dirt for a 1-2 pitch. Everyone who watches the Angels knows that Hamilton is already out with two strikes on him because he'll wave at soft breaking pitches low and away in a futile bid to protect the strike zone. But Sale already tried that on 0-2 and threw it in the dirt. So, Sale came back at Hamilton with a 1-2 fastball on the hands, which Hamilton popped up to third base ... In the second instance, after Trumbo doubled with one out in the fourth, Hamilton went down waving at an 0-2 slider that went in the front door, then Howie Kendrick went down swinging at a 1-2 slider down and away ...

For the White Sox, Alex Rios extended his hitting streak to 12 games by homering for the second straight night against the Angels ... Adam Dunn homered for the fourth time in four games, and it could be five homers if he hadn't been robbed of one earlier this week at Minnesota ... The White Sox remain last in the American League in runs per game (3.60), batting average (.237), on-base percentage (.288), OPS (.674) and OPS-plus (78). However, thanks largely to Chris Sale's pitching, the White Sox have won their last three against the Angels.

The base running: For well and ill, the White Sox are aggressive on the bases. In the third inning, Angels starter C.J. Wilson picked Alejandro De Aza off first and he was caught stealing when he decided to try second base. But in the seventh, after singling in front of Angels center fielder Mike Trout, Chicago's Dayan Viciedo ran on a 1-1 pitch with Jeff Keppinger batting. Because Viciedo ran, Angels third baseman Luis Jimenez had no play on him at second on Keppinger's ground ball and Jimenez had to take the out at first while Viciedo ran to second. Viciedo then scored on a clean single by Connor Gillespie ... Dewayne Wise, who makes a lot of outs on the bases for the White Sox, got caught stealing on a pitchout in the ninth. For whatever reason, it was a dead giveaway to the Angels, who took the unusual step of pitching out on 1-0 to nail Wise ... In the first inning, Mike Trout stole second base for the Angels and took third on a throwing error by Chicago catcher Tyler Flowers. Trumbo ended up walking on four fastballs that missed from Chicago starter Chris Sale. But the next Angels hitter, Josh Hamilton, was helpless against the lefty Sale and he popped up to end the inning ... Mark Trumbo ran hard all the way for a double in the fourth inning for the Angels, testing the arm of White Sox center fielder De Aza, which proved to be exploitable last weekend when the Angels played in Chicago.

The fielding: Mike Trout played an awfully deep center field in the seventh against Chicago's Dayan Viciedo, enabling the batter's looper to fall in for a single. Viciedo later scored, though Trout made a strong throw from center field on Connor Gillespie's single to center that drove him in. The throw was a tiny bit up the third-base line and the Angels didn't cut it, which allowed Gillespie to take second base ... The Angels were unable to capitalize in the first inning, when White Sox catcher Tyler Flowers made a throwing error on Trout's attempt to steal second base. Trout ended up at third, but did not score.

Strategic moves: The Angels obviously can't hit White Sox starter Chris Sale, so it's hard to say what manager Mike Scioscia is supposed to do against the Chicago left hander. However, it probably would have been a good day to sit left-handed hitting Josh Hamilton, who entered the game one-for-eight against Sale and is otherwise struggling this season with a .210 batting average. Hamilton ended the night zero-for-four with two strikeouts. The problem, of course, is that with Mark Trumbo playing left field against Sale, the only other available Angels outfielder is J.B. Shuck, a left-handed hitter who has never faced Sale ... Scioscia gave the start behind the plate Friday night to switch-hitting Hank Conger over veteran Chris Iannetta. Because the obvious advantage of a switch-hitting catcher is that he can bat left-handed against right handed pitching, it shouldn't be too surprising that Conger plays a lot more against right handers. Even after playing Friday night against Sale, Conger only has 22 of his 274 career at-bats against left handers, 17 of those against lefty starters. In those 22 at-bats, Conger has a total of three singles.

What now: The Angels dropped to 15-27, still fourth place in the AL West, buffered from the basement by the Houston Astros. The Angels are 12 games behind Texas. The White Sox are on a four-game winning streak, improving to 19-21. They now share the AL Central cellar with Minnesota, each four games behind Detroit and Chicago. Saturday, the Angels will try again with right hander Joe Blanton (0-7, 6.46). Blanton has allowed 75 hits in 46 innings. The White Sox are going with left hander Hector Santiago (1-2, 2.33).