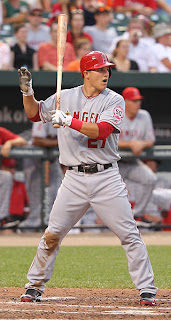 Mike Trout has been a demon in the batter's box and on the base paths lately for the Angels (Keith Allison/Creative Commons Attribution-Share Alike Generic 2.0 license).

Summary: For the Angels right now, the hitting is good, the pitching is good and the fielding, at times, is real good. They're rocking, and Kansas City is reeling.

The pitching: Like just about anyone else facing the Royals these days, Angels left hander Jason Vargas had them eating out of his hand. Vargas was almost all fastball and changeup, mixing in, maybe, a curve or slider by the innings. He tended to the simpler plan lower in the Kansas City lineup, and tended to be most tricky against designated hitter Billy Butler, who really got the Angels' attention with that five-for-five game on May 13. Vargas gave up two runs in 7 1/3 innings, allowing five hits and walking four ... In seven of his last eight starts, Vargas has pitched seven or more innings and allowed three or fewer runs ... Garrett Richards, relieving Vargas, threw real well, allowing only one hit in 1 2/3 innings. Fangraphs.com says Richards has the fastest average fastball in the game at 95 MPH. In this outing, he topped out at 97 ... Richards picked up his first save of the year ... Richards took the save situation instead of Ernesto Frieri, who, despite two saves and a hold in his last three appearances, gave up at least a run in each appearance for totals of four earned runs in 3 1/3 innings ...

Kansas City manager Ned Yost told reporters he was plenty happy with the work of his starter, Luis Mendoza, who allowed only one run in five innings. However, Yost said, Mendoza was down to an effective two-seam fastball by the time he finished the fifth inning, so he went to the bullpen and Luke Hochevar, who has been effective there. However, Hochevar had an unfortunate night and took his first blown save of the year ...

The base running: Running all over the place in this game. Mike Trout matched his forcefulness at the plate with daring on the bases. He came home from third on a wild pitch in the third inning, ran like mad from first to third on a short single to center in the fifth, and, in the seventh, he led off and stole second base (thanks to a gift call by second base umpire Marty Foster) ... Right after Chris Iannetta homered against Kansas City's Luke Hochevar in the sixth inning, J.B. Shuck ran hard on his triple to right field. The Angels apparently tried to get Shuck home with a squeeze play, but Erick Aybar apparently missed out on that appearance and didn't get the bunt down, so Shuck was dead between third and home ... Shuck was thrown out trying to steal in the eighth inning after leading off with a walk ... Lorenzo Cain set up a scoring fifth inning for the Royals just by running hard. He led off with a ground ball to Angels shortstop Erick Aybar, who fielded the ball in short left field and didn't get the throw to first in time. Cain, then stole second base without a throw on a 1-0 pitch and scored on a soft single by Chris Getz past a diving Aybar ...

The fielding: As the just noted fifth-inning escapades of Lorenzo Cain illustrate, it was an inning of near misses in the field for Angels shortstop Erick Aybar ... In Thursday night's series opener, a 5-4 win for the Angels, the Angels made a number of beautiful defensive plays. Third baseman Alberto Callaspo turned a double down the line into a ground out with a sharp play going his right, Howie Kendrick played outstanding second base on three different pivots to make them all into double plays, and J.B. Shuck made a nice running catch to his right in left field ... The Angels weren't as sharp defensively in the Friday game. In addition to his misfortunes in the fifth inning, Aybar made a high throw to Kendrick trying to feed a double play, and Kendrick didn't catch it. Error on Kendrick ... Kansas City, on the other hand, made two notable defensive plays Friday, including a leaping throw going toward the hole by shortstop Alcides Escobar for one ground out and a spinning throw by second baseman Chris Getz going to his left and then throwing across his body for another ...

Strategic moves: It's not part of any manager's strategy to deal with bad calls by the umpires. In the seventh inning Friday, Mike Trout led off for the Angels with a walk, then stole second base. But the throw by Kansas City catcher Salvador Perez and the tag by second baseman Chris Getz were clearly in time. Second base umpire Marty Foster flat missed the call. There should have been one out and no one on in a 2-2 game. Instead, there was a runner on second and no one out. It changes the whole approach pitching down the order. Suddenly, the batter, Albert Pujols, is a threat to drive in the tying run. So, Kansas City reliever Aaron Crow missed with his last two fastballs to walk Pujols on five pitches. No outs. Big inning brewing. If it's a 3-1 count to Pujols with one out and no one on, there's a different plan on that next pitch. But Pujols is hot, so Crow threw a high fastball well out of the zone, hoping Pujols would chase and knowing that a walk isn't the worst outcome. Again, though, Pujols is hot, so he laid off and the Angels had two on with no one out. The Angels followed all that with a single by Mark Trumbo, a sacrifice fly by Howie Kendrick and a double by Alberto Callaspo ... Nice move by Angels manager Mike Scioscia, bringing in Garrett Richards in a save situation. The regular closer, Ernesto Frieri, has struggled of late and Scioscia is demonstrating that he will not hold his team hostage over a struggling reliever. So many managers will keep going to the closer and say, "He's the guy we need to have in there at the end," because they don't want to take responsibility for the ninth inning. Scioscia takes that responsibility ...

What now: With this one game, the Angels moved up in the standings and the Royals moved down. The Angels now are 21-27, third place in the AL West, moving ahead of Seattle, which lost to Texas. The Angels still are 10 games behind the Rangers. Kansas City fell to 21-24, falling behind Chicago into fourth in the AL West. The series in Kansas City continues Saturday (11:10 a.m. PDT). The Angels are going with Billy Buckner, who has yet to appear in the big leagues this year. He will become the 21st pitcher the Angels have used this season. The club record is 29, set in 1996. Pitching for Kansas City is right hander Jeremy Guthrie (5-2, 3.49).