Are the Angels changing before our eyes? Or is the Chicago pitching that wild? The Angels walked six times, twice with the bases loaded, in their 6-2 win Sunday against the White Sox. After walking 16 times in the last two games, the Angels now have more walks than the American League average, which is highly unusual under the field management of Mike Scioscia. 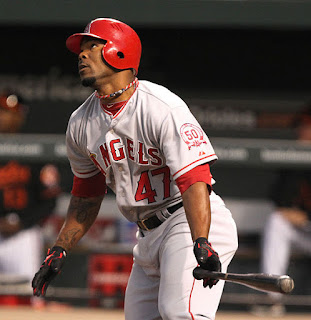 Howie Kendrick had two hits Sunday, the most for the Angels on a day when they walked twice with the bases loaded (Keith Allison/Creative Commons Share Alike-Attribution Generic 2.0 license).

Summary: The Angels got a very well-pitched game and Chicago did not. On the second of those, much credit should go to the Angels, who ran very aggressively and walked twice with the bases loaded to set up their victory.

The pitching: If everything else is equal, one doesn't expect Angels starter Jason Vargas to outduel White Sox starter Jake Peavy. But everything else wasn't equal Sunday afternoon, because Peavy was facing the Angels and Vargas was facing the White Sox ... That, and Vargas pitched beautifully in his seven shutout innings. He threw 114 pitches, and he changed speeds off the previous pitch on 94 of them. When he threw the same speed, he changed location. Vargas also pitched outside of the strike zone to good effect ... The White Sox waited for his fastball all day, and that's mostly what he threw, but he kept them so off balance that they couldn't get good swings at him ... If this game seemed different for the performance from Vargas, it was. Angels starters were 9-20 with a 5.08 ERA entering the game ... Reliever Ernesto Frieri walked the bases loaded in the ninth and gave up one run on a sacrifice fly, but he entered with a 4-1 lead and a man on in the eighth, so he still picked up his ninth save ... Peavy was going for his fourth straight win, but he walked five hitters in six innings, three of them in the fourth inning, when the Angels scored two runs. Of the five batters Peavy walked, two of them scored, and there were two instances when he walked in runs with the bases loaded ...

The hitting: After scoring nine runs Saturday, the White Sox reverted to form and hardly touched Angels starter Jason Vargas, who limited them to four hits in seven shutout innings ... The White Sox were zero-for-seven batting with runners in scoring position ... The Angels drew six walks after walking 10 times Saturday ... Get this! With those 16 walks in their last two games, the Angels have 140 for the season, which is actually above the American League average of 137 walks. The Angels, who have finished in the bottom half of the American League in walks in every season under the field management of Mike Scioscia, except his first, now are tied with Minnesota for seventh in American League walks. Last year, when the AL had 14 teams instead of 15, the Angels ranked 12th with 449 walks ... Angels right fielder Josh Hamilton, who entered the game seven-for-15 with two homers lifetime against Chicago starter Jake Peavy, was one-for-three with a single against him Sunday ... The Angels won this game even though Mike Trout didn't score, which is rare. The Angels now are 4-18 when Trout doesn't score a run, and 13-9 when he does ...

The base running: The Angels had Chris Iannetta on third and J.B. Shuck on first with no outs in the third. Erick Aybar hit a ball into the right-field corner. After White Sox right fielder Alex Rios slid to keep the ball from the fence, he threw to second baseman Jeff Keppinger, who was lined up for a throw to third. Shuck ran off first so fast that he was around third and halfway home when Keppinger let Rios' throw through and it reached White Sox shortstop Alexei Ramirez. With the play happening behind him as he reached second base, Aybar risked making the first out of the inning at third as he bolted to the next corner. He lost. Aybar was about halfway between second and third when Ramirez got the ball to third baseman Conor Gillespie, and he was out in an easy rundown ...

The fielding: Angels shortstop Erick Aybar dropped a back-handed short hop against Chicago's Jeff Keppinger in the third, enabling the batter to reach with a single ... White Sox center fielder Alejandro De Aza mishandled J.B. Shuck's single in the third, enabling Angels catcher Chris Iannetta to move from first to third ... Shuck made a nice running and sliding attempt to rob Conor Gillespie in the seventh inning, but the ball dropped just past the top of Shuck's glove for a leadoff double. One out later, Angels center fielder Mike Trout made a beautiful diving catch to his left, taking extra bases and an RBI from Jeff Keppinger. It's a tribute to Trout's reputation as a fly catcher that Gillespie wasn't already almost at third base. Instead, Gillespie waited, tagged and took third while Trout got up and threw. The Angels got out of it when the next batter, Tyler Flowers, grounded out ...

Strategic moves: Playing in the American League means you never have to hit for your pitcher. Managing the Angels means you have only one relief pitcher who is truly reliable. Put them together, and it's easy to see Angels manager Mike Scioscia's general game strategy with regard to his pitchers -- stretch that starter out as far as possible, then get the ball to Ernesto Frieri as soon as feasible. Sunday, Scioscia brought Frieri in for his second four-out save in as many days. After Jason Vargas gave him seven shutout innings, Scioscia gave the ball to Dane De La Rosa  and Scott Downs for one out each before giving the ball to Frieri with two out and a man on second in the eighth inning of a game the Angels led, 4-1. Frieri didn't have his best day, walking three hitters and giving up a run in the ninth, but he picked up his ninth save.

What now: The Angels improved to 17-27, still fourth place in the AL West, still 12 games behind Texas. The White Sox fell to 19-23, remaining tied with Minnesota for fourth place in the AL Central, six games behind Cleveland. With Sunday's win, the Angels have brought themselves even with the White Sox all-time. The series, which reached its 52nd birthday on Saturday, is tied, 351-351 ... The Angels are taking Monday off before Seattle drops into Anaheim for a two-game series that starts Tuesday. The Angels will pitch right hander Jerome Williams (2-1, 3.05) for the 7:05 p.m. PDT start. The Mariners will counter with recent Dodgers right hander Aaron Harang (1-4, 7.30), who probably wouldn't be helping the Dodgers even if they'd kept him ... The White Sox begin a three-game series at home against Boston Monday night. Right hander Dylan Axelrod (1-3, 4.27) is pitching for the White Sox against Boston left hander Jon Lester (6-0, 2.72).