Angels right hander Jerome Williams made his second start count Saturday in a 3-2 win at Chicago. Williams received help from Mike Trout's two-run homer and a dismal display of defense for the White Sox, who don't hit very well, either. 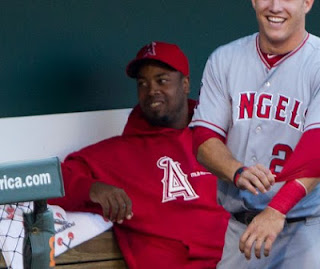 Summary: The Angels won their third game in a row against a last-place team with little to say for it except Mike Trout's two-run homer, only their second quality start in eight games and some characteristic assistance from the cellar-dwelling Southsiders.

The pitching: Jerome Williams throws five pitches, but the one he really wanted to ride was the sinker, which did him few favors. After the second inning, he mixed in everything else and had the White Sox eating out of his hand. In the first two innings, Williams threw 39 pitches, 25 of which were sinkers on MLB.com's play-by-play. The results of the sinkers: 11 balls, two called strikes, one swinging strike, five foul balls and six put in play (four for singles). Even when Williams induced ground balls with the sinker, which is the point of throwing it, the White Sox hit four straight ground ball singles off that pitch in the second inning, when they scored two runs.

After the second inning, Williams threw 53 pitches, 20 of which were sinkers. The results of the sinkers: five balls (including a 3-2 sinker that missed for a walk), two called strikes, three swinging strikes, three foul balls and seven put in play (two for singles). After the second inning, he allowed a total of three base runners, notched two one-two-three innings and retired the first two hitters in the seventh before Angels manager Mike Scioscia turned it over to his bullpen.

Quintana came out with five four-seam fastballs in his first seven pitches, the last of which Trout hit for a two-run homer. Then, he started Albert Pujols with five straight four-seamers and had a 3-2 count to show for it. He got through the inning by retiring Pujols, Mark Trumbo and Howie Kendrick with two-strike curve balls. The Angels didn't hit the ball as hard with their bats as the White Sox hit it with their gloves for the rest of the day.

The hitting: After the third inning, there was little hitting to speak of -- just five hits total. The White Sox needed to bunch five singles to score twice in the second inning ... It seems that Mark Trumbo almost never sees a fastball lately, but he singled in the ninth off a slider, the third day in a row he notched a base hit on a breaking ball ... The leadoff hitter for the White Sox in every game he has played is Alejandro De Aza. The No. 3 hitter for the White Sox in every game he's played is Alex Rios. The No. 2 hitter has mostly been Jeff Keppinger. And you wonder why the White Sox can't score. The White Sox have two cleanup hitters -- Paul Konerko and Adam Dunn. They have three No. 6 hitters -- De Aza, Rios and Dayan Viciedo. And they can't hide the rest of their hitters anywhere.

The base running: Just by the eyeballs and lacking data, one might wager that Albert Pujols has run into more outs and made more base running errors in his first 200 games with the Angels than he made in his entire 11 years with the St. Louis Cardinals. He's as aggressive as ever, but he doesn't have the same presence of mind. In the fifth inning, Pujols reached when White Sox first baseman Adam Dunn dropped his pop-up, but he turned too wide and Dunn threw him out going back. In the third inning, Pujols scored the lead run from third base on a passed ball, but he barely made it ... It wasn't Mike Trout's best day on the bases, either. After singling in the third inning, Trout got himself caught off first base by Jose Quintana. Trout tried going the other way, to second base, and was thrown out there by Dunn.

The fielding: The Angels made a nice defensive play, and the White Sox made several bad ones. In the second inning, Angels right fielder Jose Hamilton threw out Jeff Keppinger at the plate. Keppinger was trying to score the lead run from second on a single by Alejandro De Aza ... The White Sox scored twice in the inning with three ground balls to the left side. With Alberto Callaspo at third base and Brendan Harris at shortstop, they're not getting the best coverage. A single by Jeff Keppinger that inning, in particular, was playable if Callaspo were rangier to his left or Harris were quicker to his right. But Harris wasn't especially quick going to his left, either, when Tyler Greene rolled one with the bases loaded to drive in the first Chicago run. The ball never left the infield grass, so it was a tough play, but it was one of those plays where one could see the Angels missing Erick Aybar.

The White Sox have some problems up the middle defensively. Saturday, White Sox second baseman Tyler Greene made a throwing error on a routine two-out grounder by Josh Hamilton, allowing Albert Pujols to take third. With Howie Kendrick batting next, White Sox catcher Tyler Flowers let a pitch go by him for a passed ball that allowed Pujols to score. That's how the Angels scored their winning run. The problems didn't end there. In the first inning, center fielder Alejandro De Aza mishandled Hamilton's gapper and Hamilton ended up with a triple. Friday night, De Aza mishandled a double by Pujols, allowing Trout to score from first base on the error. When the next hitter, Trumbo, dropped a breaking ball in front of De Aza, Pujols scored from second without even drawing a throw.

Strategic moves: The core strategy of baseball is very simple. Get the lead and keep it. According to Retrosheet data from more than 122,000 major league games, the winning team never trails in 56.3 percent of all baseball games. You've got that battle half won with a good bullpen. The Angels bullpen tacked up 3 1/3 shutout innings Saturday to put this one away. Los Angeles relievers now have pitched 12 2/3 scoreless innings in the last five games. Closer Ernesto Frieri has really found it in May -- five appearances, 6 1/3 innings, one hit, no runs, 11 strikeouts and four saves in four opportunities. He walked three in the first of those outings, but has only walked one since then.

What now: The Angels are 14-22, still fourth place in the AL West, nine games behind Texas. The White Sox are 14-20, fifth place in the AL Central, six games behind Detroit. Each club will send its best guy out there for the Sunday night ESPN game. For the Angels, that's left hander C.J. Wilson (3-1, 3.86), who allowed seven runs, though only two earned, in a 7-6 loss in Houston Tuesday. The White Sox have lefty Chris Sale (3-2, 3.42). Sale has a 2.33 ERA over 28 1/3 innings in his last four starts, during which he never allowed more than two earned runs. But he only has two wins to show for it.