Can Angels contend? No

It's tough to say some baseball team can forget about going to the playoffs so early in June. But the Angels are so far down after botching last week's home stand that they have no remaining realistic chance of climbing into the 2013 playoff hunt. 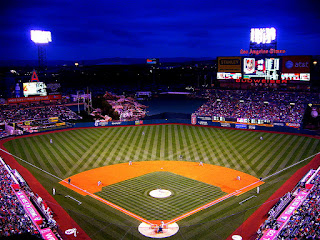 There's still a lot of baseball to be played this year at Angel Stadium, but none of it will include a playoff race (Brandon Fick/Creative Commons Attribution 2.0 Share Alike license).

One hates to put a tombstone over a baseball team so near to Memorial Day, but it's hard to be hopeful for the Angels after the home stand they botched lately against three clubs they should have defeated.

Now, we're coming to roughly the last 100 games of the season across big league baseball, and it's hard to miss what the Angels have become. Far from joining the contending class, the Angels are 27-36, firmly joined to the American League's mediocracy of nobodies. For the Angels to jump back into the playoff race ... forget it. They would now have to win right around 63 percent of their remaining games, which would put them right at 90-72, and they still would likely finish a couple games behind the second wild card.

Unless the mediocracy rises en masse against the aristocracy, which is the seven clubs now competing for five AL playoff spots, there is no chance for any team in the mediocracy to last into October. The gap is simply too large.

Just to refresh ourselves about the players, the AL aristocracy is the cream, and the mediocracy is not even the dream.

Within the cream, we find the three division leaders -- the Boston Red Sox in the AL East, the Detroit Tigers in the AL Central and the Texas Rangers in the AL West. The Red Sox are the surprise here, leading the AL with 336 runs through June 9 after all but throwing in the towel on 2013 with their fire sale trade to the Dodgers last August. The Red Sox have thrived because of unexpected hitting from unexpected sources like Mike Carp and Jose Iglesias, along with, if we want to count him as such, designated hitter David Ortiz, who only lasted for half of last year. Of course, Detroit and Texas as division leaders surprise no one.

The wild card contenders are mostly the clubs chasing Boston in the AL East. Tops among them are the New York Yankees, who, like the Red Sox, were supposed to regress this year. The Red Sox were supposed to suffer from depletions and the Yankees were supposed to suffer from injuries. Instead, they are right where we are used to seeing them, first and second, in some order, in the AL East. The scrum in that division also includes the Baltimore Orioles and the Tampa Bay Rays. Over in the AL West, the Oakland Athletics are in wild card position. All of these clubs either are in playoff position, or they're within 2 1/2 games of it. Over in the AL Central, no one.

The AL Central is this year's lonely boulevard of broken dreams. General managers from Cleveland to Kansas City figured they might be just a player or two away from beating on their weak brethren to sneak into a wild card position this year. And it is true that their AL Central brethren are weak. But so are they. Every team in the AL Central, except Detroit, is below .500.

Which puts the Royals and Indians, along with the Chicago White Sox and Minnesota Twins, into the same blender with the Angels, the Seattle Mariners and the Toronto Blue Jays as the AL mediocrities.

For a moment there, it appeared that the Angels would become something -- if not a contender, then, at least, a treacherous wannabe. They won eight games in a row during one stretch of May, lifting themselves from 15-27 to 23-27, cutting 3 1/2 games off their deficit to the Rangers and reducing it, eventually to 8 1/2 games. Many playoff teams have started worse, and the Angels apparently had at least stabilized.

But the winning streak turned out to be an illusion, an outcome of poor competition. The vanquished along the way were the White Sox, the Mariners and the Royals, who all were in last place, or next to it. The last six of those wins came on the road, so there was something to it. But the road took a familiar turn at the end of May in, of all places, Los Angeles, where the Angels faced another last place team, the Dodgers.

In the first game, the Angels quickly availed themselves of the Dodgers' disoriented interior defense, which is frequently offered to the guests at Dodger Stadium. Winners of eight in a row already, the Angels scored two runs in the first on a strikeout. But the good times ended soon. The Angels blew a 6-1 lead in the middle innings on their way to an 8-7 loss. Next night, the Angels were quieted by Dodgers left hander Hyun-jin Ryu in another loss.

Back in Anaheim for the last two games of this year's Freeway Series, the Angels apparently righted themselves with two straight wins against the Dodgers. They were 25-29, just about to right their season. The worst team in the American League, the Houston Astros, was on its way in for a four-game series.

The AL West contenders this year received a gift, the Astros in their division. In the last two full seasons, the Astros won 56 and 55 games, barely more than one-third of their games. This year, through Sunday, the Astros were 22-42, winning barely more than one-third of their games. The 20 Astros games added to the schedules for the AL West clubs stood to be easier to win than the games they replaced against other AL clubs. The Astros were a gift to the Rangers, the Oakland Athletics and the Angels.

The Rangers and Athletics have availed themselves of that gift. The Rangers are 5-1 against the Astros and the Athletics are 9-0.

The Angels have not availed themselves of that gift. They are 3-7 this year against the Astros after the Houstonians swept four from the Halos at the Big A from May 31 through June 3. Right off of that disaster, the Angels split two at home against the rebuilding Chicago Cubs. The Angels then went back on the road and lost two of three at Boston heading to a three-game series starting tonight in Baltimore.

A year ago at this point, the Angels were 33-30, second place in the AL West, 3 1/2 games behind Texas in the division and three games down to the second wild card. Right now, they are a full seven games worse than that, not only in terms of their record, but their deficit in both playoff races.

Might as well call it off now. From this point last year, the Angels were 56-43. If they do that again, they will finish barely better than .500. To do better than that, they would have to be better than they were last year.