The Angels, the California Angels, had one moment of contention in the 1960s, and Rick Reichardt, the $200,000 bonus baby, was in the middle of a fine moment during that 1967 season. But the flame burned out for the Reichardt, and for the Angels, who wouldn't seriously whiff contention again for another 10 years. 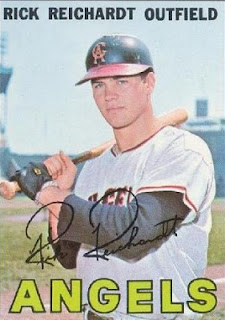 Today, June 25, marks an anniversary that isn't one of the most memorable in sports, but it's good enough for bringing up the name of Rick Reichardt, one of the interesting figures among the Angels and within the athletic world during the 1960s.

It's also a good enough excuse for talking a little bit about 1967, a outlier year in Angels history, one of few  years of roughly their first 20 in which they contended until August. It was on this day 46 years ago, on June 25, 1967, when Reichardt hit an inside-the-park grand slam, one of two in Angels history.

Reichardt was a Wisconsin native who starred in baseball and football at the University of Wisconsin. He played fullback on the Wisconsin football team that scored 23 points in the final 12 minutes of the 1963 Rose Bowl, only to lose, 42-37, to Southern California. He was at least as coveted for his baseball abilities.

The Angels won the bidding war for Reichardt in 1964 with a bonus of $200,000. The bidding war was one reason among many that the major leagues instituted the amateur draft in 1965.

Becoming a regular with the Angels in 1966, Reichardt demonstrated true star power. He hit the first homer ever at Anaheim Stadium and had 16 homers, a .289 batting average and an .847 OPS (no heard of OPS in those days) as of July 27. However, he also had to miss all of August and September to have a kidney removed.

During the offseason entering 1967, the Angels changed themselves substantially with one trade. They sent Bo Belinsky's pal, Dean Chance, one of their best players, to the Minnesota Twins in a deal that brought back first baseman Don Mincher and right fielder Jimmie Hall. Even without Chance, who helped the Twins for two years, the Angels produced excellent pitching across their staff as youngsters Jim McGlothlin and Rickey Clark came up big in their starting rotation. Meanwhile, Mincher and Hall materially improved the Angels' offense from first base and right field.

The Angels' best player, of course, was shortstop Jim Fregosi, already an All-Star and MVP vote recipient at 25 when the 1967 season began. Reichardt, in left field, was recovered from his kidney removal and primed to become a top producer.

So, the Angels had a nice club, but they were impaired offensively and they struggled, falling to 20-32 and already 12 1/2 games out of first place when they lost both games of a doubleheader at the Big A against the Baltimore Orioles on June 6. They were tenth place in the 10-team American League.

But that's when they really began to churn. In their next 11 games, Angels pitchers gave up only 27 runs and they won 10 of them. During that span, McGlothlin, George Brunet and Clyde Wright all threw shutouts, while relief ace Minnie Rojas turned up three wins and two saves. The club began climbing in the standings. When June 25 arrived, the Angels had won 14 of their last 19 as they set about closing a three-game series in Kansas City against the Athletics, one of the American League's sick men.

The Angels sent Brunet out there that day against a 22-year-old right hander, John "Blue Moon" Odom. The game began meekly for the Angels, with center fielder Jose Cardenal grounding out and third baseman Paul Schaal striking out. But Fregosi then beat out a grounder to shortstop Bert Campaneris. Apparently, that was enough to unnerve Odom, who walked Mincher and Hall to load the bases.

Up came Reichardt, who hit a fly ball deep to center field. Deep to center field truly was deep in Kansas City's Municipal Stadium, which measured 421 feet straight away and 409 feet to the deepest point of left center. So, Reichardt, the man whose $200,000 bonus was said to have been the last straw leading to the draft, hit it out there. The man fielding the ball in center field was Rick Monday, the first man taken in the first draft in 1965. The ball rolled around out there a bit and all the Angels base runners scored. Scoring, also, was Reichardt, who thereby posted an inside-the-park grand slam home run.

Brunet held a 4-1 lead going to the eighth inning, then got the first hitter of that inning out of the way when the A's No. 7 batter, rookie Reggie Jackson, grounded out to first. But John Donaldson followed with a double, then Ken Harrelson singled him in. A single by Campaneris moved Harrelson up to second base.

Angels manager Bill Rigney called for Rojas, but Ramon Webster greeted Rojas with a single that drove in Harrelson and moved Campaneris to third. It was 4-3. Next, Webster stole second to put the lead run on second. But Rojas struck out Jim Gosger and Danny Cater to end the inning. Rojas later retired the side in order in the ninth, striking out two more hitters. The Angels won, 4-3.

The Angels rambled on for another six good weeks. After sweeping three from the Boston Red Sox at the Big A, they were 62-53, only 1 1/2 games out of first place on Aug. 13. They were contending for the first time in their history, joining a legendary pennant race with the Red Sox, the Twins, the Detroit Tigers and the Chicago White Sox. It was the pennant race to which opponents of the coming divisional alignments would point when they complained of diluting the competition. Glorious.

But the Angels quickly dropped out. Immediately, the Twins swept them three games at the Big A. In the last of those games, Chance beat McGlothlin, 5-1. Then the Angels went to Boston and lost all four games. In the last of them, the Angels held an 8-1 lead through four innings. Then, Carl Yastrzemski hit a three-run homer for the Red Sox in the fifth to make it 8-4. Rigney brought in Rojas to stop a Boston uprising in the sixth, but the Red Sox scored four times to tie the game, 8-8. Finally, in the eighth, Jerry Adair homered against Rojas, giving the Red Sox a 9-8 win, the seventh straight loss for the Angels.

That was really the end of it. The Angels were 6 1/2 games down at that point, 62-60. They finished the season 84-77, 7 1/2 games back. The Red Sox beat the Twins on the final day of the season, breaking a first-place tie between them and completing their Impossible Dream season. Yastrzemski, with 44 homers, 121 RBI and a .326 batting average, won the Triple Crown and the MVP.

For the Angels, 1967 was the year of Minnie Rojas, who finished 12-9 with a 2.52 ERA and 27 saves. And it was a brief flirtation with contention. But they plummeted to 67-95 in 1968 and they contended only one more time in the next 10 years. That was 1970, the year Alex Johnson won the batting title (.329) and Clyde Wright won 22 games. The Angels were second in the league with 49 saves, but no one had more than Ken Tatum with 17. The Angels got into the AL West scrum with Minnesota and their new California rivals, the Oakland Athletics. As usual, Fregosi was an All-Star quality player, but it was his last good year. On Aug. 30, the Angels were three down. But on Sept. 4, they embarked on a nine-game losing streak against Minnesota, the Kansas City Royals, the Milwaukee Brewers and the Chicago White Sox. They finished 86-76, 12 games out.

The Angels finally won the American League West, the weaker division, in 1979. Their manager was Jim Fregosi. No need here to rehash the heartbreaks following their next two division titles, in 1982 and 1986, under Gene Mauch. They finally won a pennant, and a World Series, under Mike Scioscia in 2002.

Reichardt settled in as a .260 hitter, a 20-homer and 70-RBI guy for his next two years with the Angels. He never became a star. In 1970, the Angels traded Reichardt and Aurelio Rodriguez to the Washington Senators for third baseman Ken McMullen, who was the same kind of offensive producer. Injuries kept getting in Reichardt's way. After one at-bat with the Kansas City Royals in 1974, he retired.