Is this the Dodgers? Is this for real? 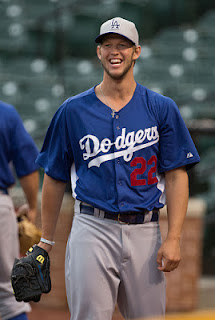 So, now we ask ourselves: Is this the start of something?

We look up and see the Dodgers winning five in a row, sweeping three from the San Francisco Giants, winning a game for Clayton Kershaw. We see Hanley Ramirez and Matt Kemp in the lineup, and they're both making plays. We see Andre Ethier run hard out of the batter's box and hustling out doubles. We see Kenley Jansen coming out of the bullpen and not fiddling around. We see the standings, and the Dodgers are only six games out of first place in the NL West.

In short, we see the Dodgers, the Dodgers who we haven't seen all season.

It's kind of hard to believe, isn't it? The season is three months old now, and this team hasn't been good for any of it. If Kershaw didn't pitch a shutout, the Dodgers couldn't win for him. The batting order has never been solid. The bullpen has never been reliable. The defense has never been sound. The team often looked lazy.

Up until just now, the Dodgers couldn't beat the teams within the National League West.

Up until just now, the Dodgers were, as manager Don Mattingly unfortunately said a couple of weeks ago, "on autopilot."

Up until just now, the season looked lost.

But, just now, the season is found again. Rediscovered. Unhidden.

It's certainly possible. It just seems so unlikely, even for a club with this talent, because these last three months have conditioned us to figure that the Dodgers somehow were missing something important. And, we remember, it's really been more than that. At the end of business on June 21, the Dodgers were 73-89 in the last year's worth of games, most of them with all of the big names who joined the team late last season. The group of players, over the course of a whole year, never, at any time, showed the ability to win. Injuries were a part of that. A part. The larger part was that this team had absolutely no flight.

But, all of a sudden, they won their last two in San Diego last weekend to gain a split in that series. And then, in came the Giants to Dodger Stadium, and, like that, the Dodgers swept them three games. And it's a funny thing about the Dodgers and the Giants, but they just have this way of striking keys upon each other. So, when the Dodgers sweep the Giants, wherever or however it happens, but particularly after three months of flat-lining baseball, it does put everything into a whole different perspective.

Wednesday night, the Dodgers beat the Giants, 4-2, completing the three-game sweep. The end went like clockwork. Kershaw went into the ninth inning. When Marco Scutaro singled to start the inning, Mattingly had to hook Kershaw, because Buster Posey was due up. So the left-hander needed to leave after 104 pitches, and he had already allowed a home run to Posey in the game, anyway. Mattingly simply couldn’t let this game get away from Kershaw, who left the mound with a 2.08 ERA and still didn’t have a win since May 20.

So, the reliever had a job to do. We’ve been watching this team all year. We know what that means.

Posey singled against Jansen, moving Scutaro up to second. We’ve been watching this team all year. We know what that means.

But, just now, it meant something different. The reliever then struck out Hunter Pence, then Pablo Sandoval, and Brandon Belt popped up to end the game. Jansen threw nothing but fastballs, cutters and otherwise. He owned those at-bats against Pence, Sandoval and Belt. He owned the ninth inning. It almost didn't seem real.

Well, here's a reality check. After these next four games at Dodger Stadium against the Philadelphia Phillies, the Dodgers will go on the road. They will go to Arizona, Colorado and San Francisco. They will play three division rivals on the road. Even after sweeping the Giants just now, the Dodgers are 8-16 against those teams.

Let's see if the Dodgers can rip that up.