Puig lifts Dodgers, but can they stay up?

The new Dodgers outfielder, Cuban defector Yasiel Puig, has really juiced up a flagging ball club. Better yet, he is going to make outfielders with big contracts fight for playing time. With two first-place clubs coming to Dodger Stadium in the next week, see if the Dodgers can make a move. 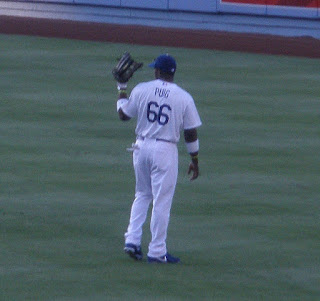 We're signing up for that chorus singing the praises of Yaseil Puig, his major league debut, and what it means for the Dodgers. Suddenly, and for however long, the Dodgers look like a team that might play a high level of baseball. Imagine the Dodgers, with the most errors in baseball, winning a game on a defensive play.

Sitting here on the morning of June 5, the Dodgers have a chance to move out of the National League West basement this evening as they attempt a three-game sweep of the San Diego Padres at Dodger Stadium. Trying not to go Pollyanna about this under-performing club, it's one sign among many that the worst is over for the Dodgers, and that they're not far from making a move. Could be wrong, of course. Been wrong many times before. The game is based in failure.

We'll find out soon enough, because this proposal is being put to the test right away. The remainder of the present Dodgers home stand involves two visiting first place teams -- the Atlanta Braves of the NL East and the Arizona Diamondbacks of the NL West. If there's anything real in this new pulse we're feeling, it will be revealed in the next week, because it has been characteristic of the Dodgers that they don't handle teams their own size, which is the main reason they're not really that size. Against clubs that are .500 or better at this moment, no NL club is worse than the Dodgers at 11-22. They're not as good as they need to be against losing teams, either (only 14-10), but if you can't at least come in around even against the winners, the losing teams will not genuflect in your presence. They'll know you can be had.

This club's problems have been much discussed. Injuries have dug so deep into the pitching staff that a club wondering what to do with eight starters in the winter has wound up giving starts to Matt Magill and Stephen Fife. Too many of Brandon League's fastballs come in too high, so he has a 4.84 ERA as a closer. The Dodgers are fourth in the league in on-base percentage (.325), but only 13th in runs per game (3.61). With runners in scoring position (RISP), the Dodgers are 13th in the NL in batting average (.234), 14th in OPS (.636) and 15th, dead last, in slugging percentage (.315).

When we crack open those RISP numbers a little bit, we see a lot of what we've seen on the field. With RISP and two out, the Dodgers are a middling team in the NL -- sixth in batting average (.234) and eighth in OPS (.639). Notice that the batting average and OPS are about the same either way, but the Dodgers are six and seven rungs lower in the NL when we look at all RISP situations compared with RISP and two out. That's what the numbers look like for a club that consistently fails to get the runner in from third with less than two out. No other team in the NL kills its own rallies quite like the Dodgers.

Put a little differently, here are a couple of quick charts. First, here's how the Diamondbacks and Dodgers chart with RISP and two out:

The Dodgers are a little better with RISP and two out, right in the middle of the NL, while the Diamondbacks are at the bottom. Now, compare these two clubs with RISP and less than two out:

We have complained here before that no one chokes up a rally the way Matt Kemp has been doing it this year, and our only regret was that we didn't include Andre Ethier in that same breath. But it's a slight regret, because Ethier isn't on the same plane as Kemp. If Kemp is gone and Ethier plays at the top of his game, then Ethier still isn't the Dodgers' best guy. Adrian Gonzalez is better. But if Kemp is at the top of his game, he's the best player on any team. Kemp is an elite player, whereas Ethier is the third best hitter on a contending team. So, we expect more from Kemp. We haven't been getting it. With RISP and less than two out, Kemp is four-for-32, all singles, with 14 strikeouts.

A couple of weeks ago, when Dodgers manager Don Mattingly started telling on his players in the media -- and they definitely had it coming -- he did Kemp a real favor by revealing that the outfielder still doesn't have himself right from reconstructive surgery on his front shoulder during the offseason. Suddenly, the fans and commentators began to see Kemp and his struggles in a new light. The man just wasn't there physically. Watching him talk to himself on the way to the dugout after another strikeout with one out and a man on second, we already knew he wasn't there mentally. Now, we began to kind of understand why.

If ever there might be gratitude about an injury, Kemp's slight pull of his right hamstring last week might be such a case. From the cheap seats, he already looked like he needed to get away. Now, he can rest his head and his shoulder while healing his hammy. Shutting Kemp down for a couple of weeks right now is the smart play on its own merits.

When the Dodgers also had to disable Carl Crawford, they made a desperate play. The Dodgers didn't want to call up Puig, the 22-year-old Cuban defector who they signed last year for seven years at $42 million. Seeing that size and speed in spring training, and seeing all that he did, batting .526 in the Cactus League, the Dodgers just wanted him to develop for a year. The Dodgers were right for wanting that, and they were just as right for calling him up because they had to.

What we've seen in two days of Puig in right field at Dodger Stadium is movie stuff. First game, he singled in his first at-bat, then he ended the game with a powerful throw to double a runner off first base. Second game, two home runs and five RBI. Two Dodger wins.

And, for all their trouble this year, we suddenly see a Dodgers team with a breath and a heartbeat. Then, when we look at the standings, they're only 7 1/2 games out.

Suddenly, Hanley Ramirez is back, Puig is up, Kemp is getting straightened out and we're seeing contributions from Scott Van Slyke. Now, outfielders with big contracts are going to fight for playing time. See if we get a little more assertiveness out there. And there's still a schedule of 105 games left to be played.

The young outfielder, Puig, has given the Dodgers a nice lift. See if they can run with it.