Round and round and round they go. But no one knows where the Oakland Athletics will wind up once their lease at O.co Coliseum expires at the end of this season. The city of San Jose is attempting to force the issue with its lawsuit against Major League Baseball. 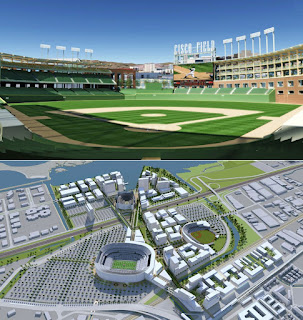 The houses that no one built: Artistic renderings of Cisco Field in Fremont or San Jose, top, and Coliseum City in Oakland, bottom (Images may be subjected to copyright. It is believed that these small, low resolution images for the purposes of news commentary constitute fair use in the absence of public domain images of these non-existent facilities).

The city of San Jose filed suit in federal court last week ostensibly challenging Major League Baseball's (MLB) long questionable exemption from anti-trust laws, though clearly intending to just force some kind of action that would end with the Oakland Athletics moving to the nation's 10th-largest city. MLB, given the power to enforce market monopolies by its anti-trust exemption, says San Jose belongs to the San Francisco Giants.

The legal merits of San Jose’s suit are up to the attorneys and judges, which we’re not, but we’ll take a quick stab at it, anyway. It begins with a question: Does San Jose have standing to sue MLB? Among its arguments, the city says the A's have an option on a tract of land for building a stadium in San Jose and that the city is injured because the A's have not exercised the option and begun building Cisco Field. MLB has advised San Jose that it would be premature to put a stadium bond before voters.

Presumably, as the option does not obligate the A's to purchase the land, it's going to be hard for San Jose to demonstrate that it has been done any direct harm. An option is just that. Suppose that A has an option, but not an obligation, to do B some favor from which B would derive other benefits. If A does not do that favor, then B can't very well say it was done direct and undue harm, because A wasn't obligated to do the favor in the first place. If the A’s had actually purchased the land, then refused to build because of MLB’s prohibition, the case would look different from here.

We’ll let the lawyers and judges sort that out, along with the other issues by which the city might establish standing. Beyond that, it doesn’t really matter if San Jose has slam-dunk arguments that would guarantee legal victory on the anti-trust exemption. The establishment of standing might be sufficient to make MLB believe that its anti-trust exemption is in peril. MLB will make some kind of a deal that satisfies San Jose before it will subject the exemption to judicial interpretation.

MLB knows it was lucky when the U.S. Supreme Court upheld the exemption in 1922. Rather than rule the exemption illegal, the court said it is up to Congress to legislate away the exemption. Rather than do that, Congress has allowed baseball to keep the exemption while forever holding the threat of revocation above the game's head like a bully club to motivate certain behaviors.

Thus, the motives for the suit are easy to understand, even if the merits aren't.

That anti-trust exemption is a powerful weapon for baseball, which means threats against the exemption are equally powerful. The exemption is why the A's can't just pack up and operate as a third team in New York. It doesn’t even allow the A’s to move into a county bordering their territory and take Sacramento, which has led the minor leagues in attendance 10 times already in the 21st century, and which also is the country’s 20th largest television market – larger than the TV markets for big league teams operating in St. Louis, Pittsburgh, Baltimore, San Diego, Kansas City, Milwaukee and Cincinnati, according to the Nielsen rankings of television markets.

As of October, when the baseball season ends, the Athletics are a team without a stadium. Their lease on the O.co Coliseum expires when the season is finished. Even if the Athletics were a team with a stadium, they really don't have a functioning stadium. A sewage backup this month forced the Athletics to move out of their clubhouse and into the digs of the NFL Oakland Raiders.

It would appear that the Athletics are a franchise with nowhere to stay. They can re-up with O.co Coliseum for a year or two at a time, but everyone agrees that it's not a long-term solution.

Do they have somewhere to go?

Another key party in the matter really wants the Athletics to leave the Bay Area entirely. That would be the Giants, who would thereby occupy the third-largest single-team television market in MLB, trailing only Philadelphia and Dallas-Fort Worth, according to Nielsen.

A's owner Lew Wolff has long eyed a move to the South Bay, which has become quite a wealthy part of the world in the last couple of generations. In that course, Wolff has frequently disparaged the possibility of getting a feasible stadium done in Oakland, and city leaders in Oakland apparently aren't fond of him either. Nor can Oakland officials be wildly optimistic about their chances for building a new stadium. City officials continue to bandy about plans, including an ambitious waterfront complex that would produce a baseball stadium, a football stadium and an arena. But in these days of public austerity in California, no one has put forward a believable account of how the project, called "Coliseum City," would be funded.

And San Jose, so far as MLB is concerned, really is off the table, unless the Athletics compensate the Giants so lavishly that the move no longer would be more profitable than just staying in Oakland and cashing revenue sharing checks from the commissioner’s office.

Up to 1993, the A's and Giants shared Santa Clara County, which includes San Jose. The Giants, then owned by Robert Lurie, sought an escape from Candlestick Park. The A's, owned then by Walter Haas, ceded San Jose to the Giants to expedite that process. Pretty smart move by Haas, really. If the Giants moved to San Jose, then the A's would take an improved position in San Francisco and control the North Bay.

But it backfired. Pedro Gomez said recently on ESPN that the A’s general manager at the time, Sandy Alderson (an attorney, by the way), neglected to write a sunset provision into the agreement by which the A’s ceded San Jose to the Giants. Lurie couldn't make it work with San Jose and wound up selling to a group led by Peter McGowan. The Giants now claim to have used their territorial rights to San Jose as a key component to their marketing strategy supporting the privately funded construction of Pac Bell Park. Now, the Giants' rights to San Jose are written into MLB's constitution, which spells out their territory thusly:

Then again, MLB Commissioner Bud Selig has said publicly that the A's didn't mean for the Giants to have the rights to San Jose "in perpetuity." Here's another issue: the MLB constitution expired at the end of 2012. That might not actually be very important. All the parties to the expired constitution still are behaving as if it were in effect.

In short, the A's can't stay in Oakland without extending their lease to a sub-standard stadium, and they can't go to San Jose, according to the MLB constitution. They do have a territory of their own, within which they can move about freely, and which is spelled out in the constitution as Alameda and Contra Costa Counties.

Which brings us to another place where the A's can't relocate: Fremont. The A's announced exciting plans back in 2006 to build Cisco Field in Fremont, which is located on the southern side of Alameda County. Fremont would have been a perfect solution for the A's, enabling them to remain in their territory and still draw from San Jose, as they would have been closer than the Giants to the tech metropolis. The A's could have controlled the East Bay and the South Bay.

But the political will within Fremont opposed the Athletics. Wolff could never obtain city council approval, even though the stadium involved no public funds up front and the environmental impact studies checked out well enough. The Northern California citizen is much more skeptical about such projects than citizens in other parts of the country. They worry more about problems like light pollution and noise pollution. They don't buy into speeches about how no public funds will be used to build a stadium, because they know public funds will be required for supporting infrastructure and public safety around the stadium, and they also believe that tax revenues lost from deductions for private luxury suites will have to be made up elsewhere.

So, there's been a stalemate, up until San Jose filed suit against MLB. If MLB and its Oakland franchise couldn't work out a solution, perhaps the lawsuit will point towards one. If not, then the Athletics remain a club with nowhere to stay, and nowhere to go.

Either way, it stands to be an amusement in itself watching MLB scramble to maintain a legal position, its anti-trust exemption, that no one else really believes it should have.