Votto not to blame for low RBI total

Cincinnati Reds first baseman Joey Votto had only 34 RBI entering games of June 18, despite a .321 batting average from the third position in the batting order. Don't blame it on him. The way the Reds are set up this year, Votto is a table setter. 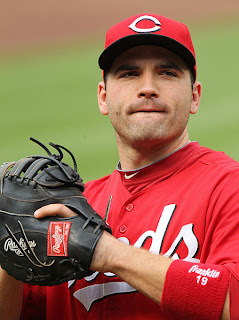 Among the more interesting developments of the 2013 season is the RBI prowess of Cincinnati Reds first baseman Joey Votto, one of the game's very best hitters.

Votto is raking. Entering the games of June 18, he held a .321 batting average while slugging .509 with a .438 on-base percentage. That adds up to a .947 OPS, which ranked fourth in the National League. His team is good -- at least good enough to beat the teams that everyone else beats (more on that in a moment).

Yet, Votto, who drove in at least 100 runs in each of his last two full seasons, had only 34 RBI to show for his efforts as the Reds' No. 3 hitter so far this season.

The problem isn't that Votto doesn't have a nose for an RBI, which isn't to say he hasn't left an RBI or two on the table. With runners in scoring position and two out, he's three-for-19 (two singles, a homer, five RBI). He could do better.

The way the Reds are set up right now, Votto is a table setter because the guys in front of him don't get on base, except for leadoff hitter Shin-Soo Choo. According to Baseball-reference.com, Votto had 33 RBI in 318 plate appearances, during which there were 195 base runners, 101 in scoring position. The average major leaguer with 318 plate appearances has 33 RBI, coming up with 188 base runners, 93 in scoring position.

Compare that with the game's run-away RBI machine, Miguel Cabrera, who entered the June 18 games with 71 RBI. In the first 311 plate appearances for the Detroit Tigers third baseman, his team had 222 runners on base (the average big leaguer with 311 plate appearances comes up with 184 runners on base). Cabrera drove in 69 of them. Cabrera will take any kind of hit that he can get to tack up two RBI. But he'll take a walk, too, with runners in scoring position -- just not quite as often as Votto.

So, Votto could do a little better at driving in runners, though he wouldn't have 71 RBI simply by expanding his strike zone. It would be much more helpful if the Reds had runners on base for him. In his first 71 games, Votto had only 88 plate appearances with runners in scoring position. That's the No. 3 hitter on the Cincinnati Reds. Isn't it peculiar that the No. 3 hitter on the Cincinnati Reds comes up with just about the same number of base runners as the average major league player?

No. 3 in the Reds order should be a prime RBI position, and it isn't. You know who Votto has driven in more than anyone else? Himself! Twelve times, followed by Shin-Soo Choo (11), then Zack Cozart (three), Tony Cingrani (two), then a bunch of guys at one each. Who else can he drive in?

The Reds have gotten nothing all year from the two hole (Cozart's OBP is .275). Shin-Soo is terrific, but the other candidates for being on base when Votto comes up would be the seven, eight and nine hitters, where the Reds are getting OBPs of .289, .316 and .209, respectively.

So, Votto gets on, then Brandon Phillips and Jay Bruce drive him in. Phillips had 56 RBI and Bruce had 48. Votto led the Reds with 53 runs. It's arguable that if Votto were to live more dangerously in the batter's box and chance more outs because of it, the Reds offense would be choked.

The more serious problem for the Reds concerns their performance against the game's better teams. After going away very quietly against the Philadelphia Phillies in the first round of the 2010 playoffs, then collapsing on their own field in the first round against the San Francisco Giants last year, the Reds need to establish that they can beat the good teams if they are to take a step forward. However, they were only 8-14 against clubs with winning records in 2013.

No one expects dominance against winning teams, of course. Only five clubs across the game even had winning records against winning clubs. Of those, only the St. Louis Cardinals (22-15) were more than two games above .500 against the winners. But for a team on the rise -- and the Reds have been a team on the rise for three years -- winning a fair share against the good teams is credibility itself.

But don't blame it on Joey Votto's RBI totals.