Dodgers bashing everyone -- except left-handed starters

The Dodgers would seem to be unstoppable right now, winning 26 of their last 32 games and improving their standing by 12 games in five weeks. But there is this matter about failing to hit left-handed starters that defies easy explanation. 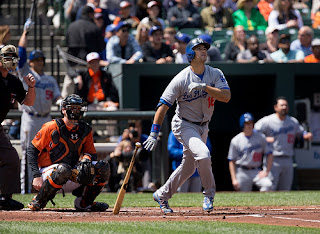 Contrary to what one might think, Andre Ethier is not the problem for the Dodgers as they struggle against left-handed starters (Keith Allison/Creative Commons Attribution-Share Alike 2.0 Generic license).

The Dodgers are what it's all about in baseball right now, winning 26 of their last 32, winning when they strike out 20 times, winning against teams that appeared in the 2012 playoffs, winning everywhere they go.

From a low point of 30-42 and 9 1/2 games out of first place on June 21, the Dodgers have soared to 56-48 and a 2 1/2-game lead on the Arizona Diamondbacks in the National League West. Against teams that played in last year’s postseason, the Dodgers are 11-2 during this run. Hits make headlines, and the Dodgers are making plenty of both, batting .285, hitting 35 homers and scoring five runs per game during this 32-game romp.

However, hard as it is to find failure in this Dodgers surge, their 1-0 win at Dodger Stadium against the Cincinnati Reds on July 28 illustrated a flaw. The Dodgers continue to struggle against left-handed starting pitchers, and especially against good left-handed starters. In that 1-0 win on Sunday, the Dodgers struck out 20 times, their most since they moved to Los Angeles in 1958. Reds starter Tony Cingrani struck out 11 of them in seven innings.

During these last 32 games, the Dodgers have faced nine left-handed starters, and they have won their share, going 7-2. However, that's mostly a gift of their own outstanding pitching, as their batting has been little help in these games.

And this includes three real clunkers pitched to the Dodgers by left-handers of little or no distinction: Mike Kickham of the San Francisco Giants, Drew Pomeranz of the Colorado Rockies and Tyler Skaggs of the Arizona Diamondbacks. Throw those out, and the other six left-handed starts against the Dodgers have issued this line: 42 innings, 22 hits, nine runs, eight earned, eight walks and 48 strikeouts, which comes out to an ERA of 1.75 and a WHIP of 0.731.

Even Andre Ethier, who has never been known for hitting lefties, has done his part during this run of games. Though Ethier's .241 batting average against lefties this year closely tracks his lifetime .238 average against them, he is six-for-19 with a walk and five strikeouts against left-handed starters during these last 32 games.

But one can see how the Dodgers weaken against left-handers once they go down the lineup from Puig. Against right-handed starters, the Dodgers line up, two through five, with Puig, Gonzalez, Ramirez and Ethier. This group has demonstrated some prodigious feats of hitting in that alignment against right-handers. But we see that Gonzalez is just a little less productive against lefties, then Ramirez follows him by being nearly 100 batting average points worse against lefties. Dodgers manager Don Mattingly moves Ethier down the order or benches him against lefties and the No. 5 hitter in his place -- be he Jerry Hairston, Juan Uribe, or whoever -- simply doesn't produce.

While Dodgers general manager Ned Colletti seeks trade deadline upgrades, it would seem that a strong right-handed bat is an obvious target. But the Dodgers might not even have to particularly worry about that, because they have Matt Kemp waiting on the disabled list. No one destroys left-handers like Kemp, who batted .363 against them last season and has hit them for a .340 average throughout his career.

It's hard to criticize the Dodgers right now, and they certainly have the magic. Even striking out 20 times against Cingrani and the Reds, for example, their own pitching, led by lefty starter Chris Campuano, was even better, and there was that man, Puig, with the homer to win it in the 11th.

But they do have a vulnerability here, and a playoff opponent that can present them with left-handed pitches could cause them problems. Assuming, of course, that they reach the playoffs. Thus, there's still a good deal of this season riding on Matt Kemp. There always is. Even, it seems, when he is out of sight.