The Angels according to WAR

The statistical confection known as Wins Above Replacement (WAR) has become something of a new religion among a certain strain of baseball fans. As such, it requires a leap of faith, which some of us aren't quite willing to take. Here's what WAR says about the Angels in 2013. 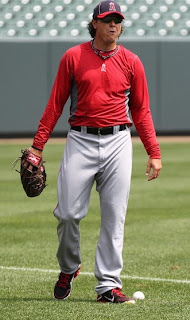 According to WAR, Angels pitchers are considerably better than they were last season, and Scott Downs, in particular, is about five times as good (Keith Allison/Creative Commons Attribution-Share Alike 2.0 Generic license).

The question before us is this: Considering that the Angels, taking the first 88 games in total, are paced to finish ten games worse than they finished last year, what is that difference? How, specifically, are the Angels ten games behind last year's rate of victory?

Like many other commentators, we're intrigued by Wins Above Replacement (WAR) as a way to measure specific player contributions to winning games. Unlike many of those same commentators, who talk as though WAR should be the last word on important questions like a player's worthiness for the Hall of Fame or a Most Valuable Player award, we're not sold on WAR. We're still kicking the tires and checking under the hood.

A check under the hood involves a critique of the methodology, a critical look at the assumptions involved in working out the formula for determining WAR. Tire kicking involves putting certain questions to WAR and seeing how it answers. What follows is an exercise in tire kicking.

Baseball-reference.com (insert deep bow here) bases WAR on the assumption that a team composed entirely of "replacement" players, players of the "4A" type who are easily available to every team, would win 48 games in a 162-game major league season. Thus, a team that wins 90 games in a season would have 42 games of WAR value -- the 48 games that a team full of replacements would win, plus 42 "wins above replacement."

That's a pretty different world. So, WAR raises at least as many questions about itself as it answers about player value, and that should be kept in mind as we put it to work. It's a long way from being perfected.

It's also a lot of fun. So, back to the fun. Let's look at the Angels.

So far in 2013, Angels pitchers have produced 6.6 WAR, which works out to 12.2 WAR over 162 games. As it happens, Angels pitchers produced 4.8 WAR for all of last season. If WAR is to be believed, then Angels pitchers actually are better this year than last year, even though they rank 11th in American League ERA this year (4.23) and they ranked eighth last year (4.02).

At the end of last season, the Angels let go of Dan Haren (-0.4 WAR in 2012) and Ervin Santana (-1.3) and, essentially, replaced them with Jason Vargas and Joe Blanton. Vargas, with a 1.9 WAR so far this year, projects out to about 3.7 WAR over a full season, though we know we're not getting that because he'll miss about six weeks with a blood clot. Blanton has a -0.4 WAR, which works out to about -0.8 over the full season. Between Vargas and Blanton, the Angels would realize about 3.0 WAR over the full season, an improvement of 4.7 WAR over the combination of Haren and Santana in 2012.

C.J. Wilson finished with 0.7 WAR last year and now has 1.3 WAR in 2013, which would take him to about 2.5 over the full season. That's an upgrade of 1.8 WAR. Jered Weaver last year had 4.0 WAR and, so far this year, has 1.4 WAR, which would get him to about 2.8 over the full season. But Weaver is the reverse side of Vargas in that the former already has been injured and we might expect him to outpace the WAR he has established so far. The way Weaver is going lately, he might match last year's 4.0.

Last year, the Angels brought in Zach Greinke as a short timer and he gave them 1.4 WAR. He's pitching across town now and the Angels don't have an obvious replacement. However, Jerome Williams is good enough for WAR purposes. Last season, Williams totaled -0.2 WAR. This year, so far, he is 0.6, which rates out to about 1.2. That's an improvement of 1.4, which was precisely Greinke's contribution last season.

Ernesto Frieri last year totaled 1.4 WAR and he has 0.9 WAR so far this year, so he would come in around 1.8 for a small increase. But Scott Downs is showing a big increase, up from 0.4 WAR last year to 1.2 so far this season. He would pace out to about 2.4 WAR this year, a full two games better for a situational left-handed reliever. Even Garrett Richards works out better this season. Last year, he finished with -1.0 WAR and this year he projects to about -0.2 WAR.

Assuming that the discrepancies involving Weaver and Vargas will come out in the wash, the body of pitchers so far considered would come in right about 12 WAR better than last year. As to the remaining pitchers from each year, the guys who come and go, the Angels are about two WAR worse in 2013.

Position play, WAR tells us, is where the Angels really suffer this year in comparison with 2012. Defensively, in particular, WAR tells us exactly what the eye tells us. The Angels are ghastly this year. In 2012, they totaled 4.6 defensive WAR. In 2013, they are -4.7 WAR, which comes to about -9.0 over the full season. Perhaps WAR is telling us something about the relationship between pitching and defense, because the common measures tell us that the Angels pitching is worse this year, while WAR tells us that the pitching actually is better and it's the defense that's worse.

All of that is somewhat offset by improvements from other players. Howie Kendrick, who finished last year with 3.1 WAR, already has 2.8 in 2013 and would come in around 5.5, an increase of about 2.5 games. Chris Iannetta finished 1.4 in 2013 and already has 1.3 in 2013, so he figures to come in about 2.5, an increase of about one game. Peter Bourjos last year had 1.2 WAR and he has 1.3 already this year, so he would be about 1.2 better over this full season, except that he can't stay in the lineup. Mark Trumbo, 2.7 WAR last year, is 1.5 so far this year, so he would come out about the same. So, we see an improvement of about five WAR in 2013 among these players.

Putting it all together, WAR tells us that the Angels, over 162 games, would be going on four games worse offensively (down from 36.7 WAR in 2012 to about 33 this year), about seven or eight games better in their pitching (up from 4.8 to 12.2) and about 14 games worse defensively (down from 4.6 to about -9.0). That accounts, give or take, for the 10-game difference to the bad this year for the Angels.

Outside of WAR's suggestion here that pitching really isn't the Angels' problem, which is a little surprising, this quick and dirty study supports much of what we can plainly see by quantifing our qualitative intuitions. We could already tell that Hamilton instead of Hunter has turned out to be a bad exchange. WAR gives us an inkling of how bad. We could already see that Pujols, Callaspo and Aybar aren't as good as they were last year. WAR gives us some purchase on the extent of those declines.

In some respects, though, we're finding WAR quite hard to believe. WAR tells us that Trout is -1.3 defensively in 2013. Really? This season, the Angels are 10th in American League ERA by starters at 4.43, compared with fifth last year at 4.04. But WAR would have us believe that they get better starts this season. According to WAR, the Angels are a couple of wins better behind the plate this year. That isn't obvious.

WAR certainly is a salty concoction. It makes our discussions, like our food, tastier and more interesting, in the right amounts. In excess, it causes thirst, bloating, high blood pressure and weakening of the bones (osteoporosis), which might also characterize a good many baseball arguments that take WAR as gospel. Perhaps, WAR should be taken with a grain of salt. Doesn’t mean we shouldn’t use it. But it’s not a good main course.