The Los Angeles Angels are built on gimpy sluggers signed to expensive long-term contracts. Now, it's August, and we can see where it has gotten them -- 15 games out of first place in the American League West. 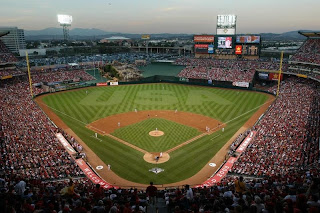 It has been years now since Angel Stadium was the scene of a playoff race (public domain image).

The Angels had a lot riding on their first 20 games after the All-Star break. But by the time they played 10 of them, the ride was done.

Look at this team now -- 53-64, 15 games out of first place in the American League West. Last week, Angels manager Mike Scioscia resorted to running pitchers infield practice before a game because his players can't handle tasks that are supposed to be mastered in spring training. This club was supposed to be a contender. Instead, it was running spring training drills in the middle of August.

The cat calls to replace Scioscia are louder than ever now, but here's one vote for keeping him. Scioscia didn't cause the problems with this team, which were characterized, from the start, by an imbalanced roster and a suspect list of starting pitchers. Everyone knows that the star-struck owner, Arte Moreno, has built this team on names and marketing objectives, rather than on skills and baseball objectives.

It's hard to tell how much of this disaster should be pinned to general manager Jerry Dipoto, whose record isn't sterling, but neither are his working conditions. He’s dealing with a busybody owner who clearly doesn’t understand the game. There are only 30 GM jobs in the big leagues, so you can’t blame a guy for taking any such opportunity, but it remains that meddling, trigger-happy ownership undercuts the GM’s mission, which is to build an organization that can win every year.

The Angels haven't had a good general manager since Bill Stoneman, who came on board before the 1999 season, built the 2002 World Championship team and won 90 or more games four times for a franchise that had won 90 only four times before in its history. For the two years after Stoneman's 2007 resignation, the Angels won two divisions on his fumes.

Moreno purchased the Angels on May 15, 2003. By then, Stoneman had the credibility that came with winning a World Series. Stoneman had his critics, who found him insufficient in the pursuit of big hitting. He believed in pitching, young players and depth. Headlines did not appear to interest him. You don't win with headlines, or even with hitting. You win with pitching.

Post Stoneman, though, the Angels have become everything his critics thought they should be. Post Stoneman, the Angels just can't accumulate enough star power. Where has it gotten them? They get the equation wrong. You don't win with stars. You make stars by winning.

Now, the Angels are defined by gimpy, aging sluggers signed to expensive contracts, and they are paying the price in more than just payroll. Since 2009, they have spent exactly one day after July 4 in first place. That was July 5, 2011, when they were tied with Texas. But the Angels lost the next day and they fell five games off within two weeks.

So, being nowhere in August isn't a new experience for the Angels. They're almost designed for it.

At the All-Star break this year, the Angels were 44-49, 11 games behind the Oakland Athletics in the American League West and nine games behind the Texas Rangers for the second wild card. But the schedule gave the Angels a path to contention, featuring 13 games of their next 20 against the A's and Rangers. Sure, the Angels needed to do much more than tread water. They needed to win at least five of their seven against Oakland and at least four of their six against Texas.

If the Angels did just that much, and all their other results since the All-Star break were the same as they have been, they would be 59-58 through Aug. 12. The Athletics would be 65-52, and the Rangers would be 65-54. In that case, the Angels, right now, would be six back in the AL West and four behind the Baltimore Orioles (65-53) for the second wild card.

Moving left-handed reliever Scott Downs to the Atlanta Braves for minor league reliever Cory Rasmus, whose professional career has been marked by shoulder surgeries, the Angels conceded that they didn't have enough else to win. The reliever who can douse left-handed hitters in the late innings is a crucial piece for a team with ambitions. The Angels were saying they no longer needed it.

The next trade, Alberto Callaspo to Oakland for infielder Grant Green is a bit more defensible. Callaspo was never anyone's idea of a regular third baseman. Green, who played high school and college ball locally, has a chance to become that. The Athletics always liked his bat. With the Angels, Green is seven-for-18, playing second base in the absence of injured Howie Kendrick.

And that's another piece of all this. It's not a coincidence that players suddenly are injured. Players are injured all the time. In times of contention, those injuries often are no match for the prize. In times of irrelevance, they become disabling. Hence, Albert Pujols also is shelved, as he absolutely must be so he can deal with his plantar fasciitis and come back strong next season.

This Angels season was badly conceived from the beginning. That’s why it’s been poorly played since.