As long as we're going to be this righteous and indignant about performance enhancing drug (PED) use across Major League Baseball, or if we just want to take it seriously, then shouldn't at least some of the burden be placed on the clubs? 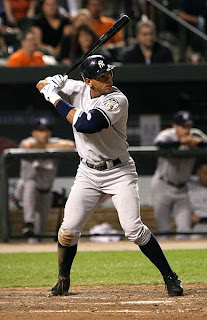 The New York Yankees almost got what they wanted with a suspension for Alex Rodriguez, but Rodriguez has appealed (Keith Allison/Creative Commons Attribution-Share Alike 2.0 Generic license).

We've been mostly satisfied, in recent years, that Major League Baseball is at least trying to be serious about performance enhancing drugs (PEDs). However, the last year of suspensions, and their outcomes, have laid open a major flaw in the game's approach.

Seeing how the commissioner's office handles PED suspensions, one would believe the clubs are totally innocent bystanders wronged by misbehaving players trying to trick the system. In case after case, we see clubs actually benefitting from suspensions of their players, and there remains absolutely no incentive for clubs to clear themselves of PEDs. Because of that, players who have been busted wind up profiting, anyway.

A year ago, when drug testing brought 50-game suspensions to Melky Cabrera of the San Francisco Giants and Bartolo Colon of the Oakland Athletics, this little corner of the Internet supposed that both players also would pay for their transgressions in the marketplace. The suspensions removed Colon from his first $2 million contract in years, and Cabrera was widely reported to be talking with the Giants about a three-year deal for $27 million. Naturally, those negotiations ended with Cabrera's suspension.

Turns out it was silly to suppose that Cabrera and Colon would be damaged on the free agent market. Cabrera worked a two-year, $16 million deal with the Toronto Blue Jays after his suspension, still a raise from his $6 million contract in 2012. The Athletics signed Colon again and raised his salary to $3 million. Everyone knows that each player faces a 100-game suspension the next time he tests for a banned PED. But how does that hurt the clubs? They would just take the production they've gotten and move on without the suspended player, having no obligation to pay him. Unlike an injury, in which the club still has to eat the salary unless it has taken out insurance, a PED suspension removes the player from the books for as long as he is out.

So, if Cabrera were to be suspended for 100 games, the worst that happens to the Jays is that they lose the player for that long and save about $6 million. If your team isn't going anywhere, anyway, that's not a bad trade. And even if your team is going somewhere and you have to get there without him, the player still helped get you there. Last season, the Giants went all the way to the World Championship post Cabrera, but Cabrera certainly had something to do with putting them into that position. It's all upside for the clubs. The clubs still benefit from cheating, and they pay no price for that benefit.

So long as there's nothing to stop the clubs from signing PED users to nice contracts in which the club assumes no risk for a repeat offense, then that lucrative marketplace always will be available to players. And that significantly lessens the deterrent for players. Cabrera and Colon are two fine examples. Both of these players were nowhere three years ago. Their major league careers and the earning powers were shot. Suddenly, each player improved by leaps and bounds and, a year later, as they were getting better still, it turned out that PEDs were involved. It's seems safe to say that PED use improved the value of each player from approximately zero to several million dollars, and that amount continues to grow.

A year ago, we argued that PEDs would never go completely away because there's enough money in a big league career for a player to justify that risk, at least economically, just to get a little piece. If it all blows up because he gets busted, at least he snagged that couple of million dollars. It turns out, though, that the player's risk is even less than that, because the player's market value might even go up after a PED bust.

So, PEDs make sense not only for a guy just trying to save his major league career, but they make every bit as much sense for any player whose contract year is oncoming. Just go ahead and juice, because your production will thereby rise and, even if you get busted, you just lose 50 games of pay and you will get it back on the other end because the suspension doesn't diminish the market value you gained by juicing.

Suppose you're a big league player in his final year before going free agent for the first time. Maybe the arbitrator called against you and you're making $5 million, but you can command a five-year deal for about $60 million when you go free agent. You're pretty good, but not great. Maybe, though, with a little laboratory adjustment, you can become that big star who can get a five-year deal for $100 million.

Suppose you don't juice. Fine. Take the $5 million this year and sign that deal for five years and $60 million.

Suppose you juice and turn into a monster who produces at a level that draws that $20 million salary, but then you get busted two-thirds into the season, which is about how it goes. Even better. You give up 50 games, about two months of your $5 million season, so you're out about $1.67 million. But then you go on the market when your suspension is up, and you can still get that $100 million deal, because the clubs have nothing to fear. By juicing, you've traded away $1.67 million for $40 million.

We haven't actually seen the scenario here described, but it's waiting to happen. It just stands to reason. We hear the players saying all the right things about PEDs, but you know there are players out there who have seen what happened with Colon and Cabrera, and they will draw the evident conclusion that it's worthwhile to juice. Even if you lose 50 games of your smaller contract, you will gain millions more when you reach the marketplace.

It isn't merely that the clubs pay no price for contracting with steroid users. They are actually indemnified by how the commissioner's office handles suspensions.

In April 2011, the Milwaukee Brewers signed their young slugger, Ryan Braun, to a five-year contract extension worth $100 million that pays him through at least 2020. Then he failed a drug test in 2011. Braun led the National League with a .994 OPS in 2011 and won the NL MVP award, then escaped suspension on a technicality. But he got caught up in the Biogenesis scandal, and now he is serving a 65-game suspension, which means he is out for the rest of 2013.

One doesn't see the Brewers complaining about Braun. Right after the suspension was announced, in fact, Brewers general manager Doug Melvin said he was rather pleased. The Brewers can go to 2014 with Braun, knowing the case is closed and they can get on with life. All it costs the Brewers is that they don't have to pay a little more than one-third of his $8.5 million salary this year. The season is lost, anyway, so the Brewers must be happy about saving $3 million.

Everyone knows the New York Yankees want to get out of their contract with Alex Rodriguez, the 10-year, $275 million extension they signed after the 2007 season. Entering 2013, Rodriguez was still due $114 million in salaries, plus $30 million in marketing bonuses, which is $6 million for each of five career home run milestones starting with 660.

The Yankees have been very public about wanting to reduce payroll below the luxury tax threshold of $189 million, because it would reduce their tax rates going forward. For 2014, according to the numbers on baseball-reference.com, the Yankees are on the hook for about $123 million, counting six guaranteed contracts, one option and the estimated outcomes for nine players who are eligible for arbitration. They still have to account for nine other players, including free agents Robinson Cano, Hiroki Kuroda and Boone Logan, all of whom, presumably, they would like to keep. Between them, those three players are around $40 million in 2014. They'll still need six more players. Looks like the Yankees might be cutting it close to come in below $189 million. But if they can get A-Rod's $25 million off their books, it becomes easy. If that salary goes away, the Yankees can play in the free agent market and still come in under $189 million.

A few weeks ago, before the last round of suspensions came down and while A-Rod was rehabbing from injury in the minor leagues, he hinted that the Yankees had an interest in getting him suspended for a very long time. It wasn't anything that Baltimore Orioles manager Buck Showalter hadn't already said. But so vilified is A-Rod by now that one would have thought he was Edward Snowden exposing state secrets for alluding to the obvious. Of course, the Yankees don't ever want to pay Rodriguez another cent. They want him suspended for a long time.

And that's what the commissioner's office provided, a 211-game suspension benching A-Rod for the rest of 2013 and all of 2014. The Yankees could not have asked for a better outcome. If it had gone that way, the Yankees would have saved about $10 million of A-Rod's $29 million 2013 salary. They might have recouped a lot of the rest through injury insurance, because he missed the first four months this season following hip surgery. They also would have been off the hook for $25 million in 2014. Then, there's that $6 million marketing bonus for reaching 660 homers. As Rodriguez waited to suit up, he was only 13 homers short. He definitely would not have received it this year. Then, he would have returned in 2015 at 39 years old, having been out for two years. By then, his salaries drop to $21 million, then $20 million.

Of course, it hasn't worked out that way. The Yankees and the commissioner's office are fuming now, because Rodriguez exercised his right to appeal. He's playing. Now, he gets his full $29 million in 2013, and that fact that he's playing probably won't be persuasive if the Yankees pursue an insurance claim. And if Rodriguez reaches 660 homers this year -- and he's only 11 short right now -- that's another $6 million. Just by appealing and pushing back the clock on his suspension, A-Rod stands to gain about $16 million, just in case he never plays again.

Score one for the player, even if it's a player who no one wants to support. Because of A-Rod's appeal, the club didn't get off so easily, either.