In 2011 and 2012, we saw the Pittsburgh Pirates plunge in the second half. Early this week, we thought we might be seeing the 2013 version. But after Francisco Liriano's brilliant performance Wednesday night in St. Louis, maybe not. 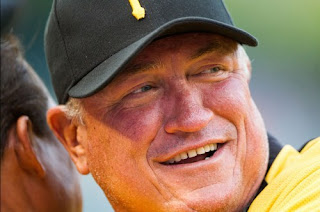 Pittsburgh Pirates manager Clint Hurdle is trying to hold it together as his club goes to the final six weeks of the season in first place (Keith Allison/Creative Commons Attribution-Share Alike 2.0 Generic license).

In the last two years, the Pittsburgh Pirates have become the team most known for second-half jitters. This year is looking quite a lot different. But there's still so much of the second half left.

The Pirates notched a 5-1 win Wednesday night against the St. Louis Cardinals, improving their lead in the National League Central to three games. The Pirates are 71-48, looking pretty good for a franchise that hasn't produced a division title, a playoff appearance, or even a winning season since 1992.

But we've seen the Pirates in something like this position before.

In 2011, the Pirates were in first place by a game on July 25 with a 53-48 record. They made some acquisitions midseason, nothing huge, but Ryan Ludwick, Lyle Overbay, Derrek Lee and Jason Grilli. The Pirates should have improved. But they imploded quickly, losing 12 of their next 13. By Aug. 7, they were in fourth place, 10 games out of first.

In 2102, the Pirates made their last appearance in first place on July 18, but they still were only 2 1/2 out at 63-47 on Aug. 8. And they made midseason acquisitions, even better ones this time, such as Wandy Rodriguez, Chad Qualls, Gaby Sanchez and Travis Snider. They should have improved. But they imploded again, losing 17 of their next 24. By Sept. 3, they were in third place, 11 games out of first.

So, the Pirates held on a little longer last year, but the implosion still came.

Will the implosion come this year?

As of last Thursday, Aug. 8, the Pirates were 70-44, first place in the division by four games. This time, they did next to nothing at the trade deadline. They sent a player to be named to Seattle for Robert Andino, and promptly assigned Andino to the minor leagues. They didn't improve themselves at all.

And the implosion hasn't happened. It's been looking, maybe, like it was about to happen. The Pirates lost four straight entering Tuesday night's game in St. Louis, watching their lead get chopped from four games to two. The last two losses were heartbreakers. Sunday, closing a series at Colorado, hoping to salvage one of three games, the Pirates held a 2-0 lead, only to lose, 3-2. Then, on to St. Louis, where the Cardinals, seeking to pull even, prevailed, 4-3, in 14 innings Tuesday night.

So, Wednesday's game in St. Louis was rather big. A Cardinals win would have pulled them to within a game of the division lead while increasing the Pittsburgh losing streak to five. That certainly would not have been a morale boosting experience for the Pirates. Disaster loomed.

But it has, for now, been averted. The Pirates victory guarantees that they will leave St. Louis Thursday still in first place. Their next lost will be their first in a row, not their sixth.

If the Pirates survive this next six weeks to win the division, then, give credit to Francisco Liriano, the left-hander whose flights all over the mound last year would have made any stunt pilot proud, so little could he repeat his delivery and keep his back shoulder from coming open. Last season, Liriano was a combined 6-12 with a 5.34 ERA for the Minnesota Twins and Chicago White Sox. The Pirates signed Liriano as a free agent for $1 million this year, with an $8 million team option for 2014.

Chances are, the Pirates are picking up that option. Liriano was brilliant for the Pirates Wednesday night, throwing a complete-game four-hitter while striking out six. Now, he's 13-5 with a 2.68 ERA.

Pitching has been the difference for the Pirates so far in 2013. They lead the National League with a 3.11 team ERA this year after finishing eighth last year at 3.86. Not a bad trick for a team that lost Kevin Correia to free agency in the offseason, then, to the disabled list, Jeff Karstens in March, James McDonald in May, Rodriguez in June and Grilli in July.

Pirates manager Clint Hurdle keeps patching it together. It helps when Liriano can stop a losing streak on the road against their closest pursuer, when staff ace A.J. Burnett pitches to a 2.95 ERA, and when the farm system can feed Jeff Locke (9-3, 2.43 ERA) and Gerrit Cole (5-5, 3.95) into the rotation.

The Pirates still trouble their fans offensively. It remains that Andrew McCutchen is their only true batting star. But even though they were 10th in National League scoring in 2012 and now are 11th in NL scoring, their lineup is much better balanced. From a year ago, they are upgraded offensively at catcher with Russell Martin, at first base with Sanchez and Garrett Jones sharing time, and with Starling Marte playing every day in left field. With 29 homers and a .236 batting average, third baseman Pedro Alvarez still is all or nothing. Clint Barmes still is as poor of a hitter as you will find at shortstop, but Jordy Mercer gives them a little stick when he plays instead.

The Pirates are a much better team this year, and they are holding punches against the big guys. In their games against the other NL teams that figure to be in the playoffs -- the Cardinals, Dodgers, Atlanta Braves and Cincinnati Reds -- the Bucs are 20-18.

They'll finally be in the playoffs if they can just hold steady. For a moment not long ago, it was looking like they might not. Now, maybe, they might.

(Editor's note, Aug. 18: The above has been tweaked to get the days straight.)