Puig needs to cool it, or he'll cool down the Dodgers

Yasiel Puig, 22, is a wonder for the Los Angeles Dodgers, who have become powerful contenders through his energetic style of play. As the competition becomes more serious, though, it becomes a question of whether his erratic style of play will derail the Dodgers' championship bid. 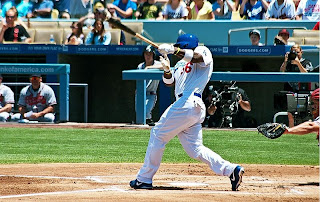 Yasiel Puig is hitting .352 for the Los Angeles Dodgers and winning games dramatically. But some of his dramas are potentially damaging (Ron Reiring/Creative Commons Attribution 2.0 Generic license).

The saga of Yasiel Puig brings up a lot of the old dualities concerning the relationship between genius and reality.

Of course, "genius" isn't typically the word to describe dominance on the baseball field, and anyone who finds himself constantly groaning about Puig's reckless throws and base running misadventures will agree that genius is no part of his game. Nor is Puig's expression of the game especially original. It's just endlessly dramatic, perpetually thrilling and consistently inspiring. Maddening, too. But we'll take it.

By now, everyone knows that Puig showed up at Marlins Park in Miami Tuesday 35 minutes before stretching, a little bit after the second bus arrived from the hotel. Traditionally, players who don't take either of the buses from the hotel, whether because they have other transport or because they stay at other locations, are required to be at the yard before the second bus arrives. Puig has a home in Miami and reportedly was caught in traffic. As Dodgers manager Don Mattingly told reporters, it happens.

So, Mattingly fined Puig the usual nominal amount, which is usually about $500, and benched the young star, which he was going to do, anyway. Puig was on an zero-for-11 and hadn't taken a day off since Aug. 4. Of course, his tardy appearance was huge news.

So, then, was his at-bat in the eighth inning, when he homered off the bench against the Miami Marlins to break a 4-4 tie and trigger a 6-4 Dodgers victory.

Moments like that are the upside with Puig, who was batting .352 with a .979 OPS. Puig was batting .353 against left-handers and .351 against right-handers with 12 homers in 261 at-bats -- seven of his homers coming in the sixth inning or later.

But it's only because Puig has such a flair for the dramatic that the Dodgers, or any other team, would put up with his warts, which include a tendency to show up veteran teammates on the field, throwing to the wrong base so he can show off his arm and running into outs as he attempts to show off his speed. Which is to say nothing of his harrowing confrontations with umpires.

Puig is untamed, flouting the conventions of the game, only to make the game his own in the end. Of course, that works against teams like the Philadelphia Phillies and the Miami Marlins, who have been losing all year long. In the playoffs, though, when all the teams you play are good, weaknesses not only are exposed, but they are exploited. When the playoffs come around, the Dodgers will lose a lot more from Puig's vices than they will gain from his virtues. The game is based in failure, and the fear remains that Puig will bring more failure on himself than he or his team can overcome.

Thus, the pundits have offered us two schools of thought about Yasiel Puig. One, which might be represented by MLB.com's Richard Justice, says leave the kid alone and let him be himself. Perhaps it is because of Puig's exuberance that the Dodgers have done as well as they have (50-20) since he came to the big leagues. The other, which might be represented by Bill Plaschke of the Los Angeles Times, says the Dodgers need to harness Puig and get him under control before he kills them in the postseason.

The inclination here is to agree with Plaschke. Puig will never reach his potential, nor will the Dodgers reach theirs, so long as they can't bring his game under control. In particular, these confrontations with umpires really need to stop. If he starts going badly, then calls start going against him, and if he's still missing cut-off men and running into outs, he's not going to be a very good player, at all.

The Dodgers do need Matt Kemp back, but not to remove Puig from the lineup. Indeed, as recent outings against David Price, Cliff Lee and Cole Hamels have reminded us, a good left-handed starting pitcher is the best antidote to the Dodgers. The Dodgers will need Puig and Kemp in the lineup simultaneously to handle left-handed pitching.

But if Puig doesn't learn, or isn't taught, how to handle his emotions and harness his game, there's a real good chance that it won't end well. For all the promise and excitement that Puig has brought to the Dodgers with his upside, his downside can still keep them from realizing that promise and excitement in their fullest manifestations.