We haven't seen a baseball team so poor for so long as the Houston Astros since the expansion New York Mets. Now, turns out, we're not seeing them. According to Nielsen, no one in the Houston area watched the Astros on television Sunday afternoon. 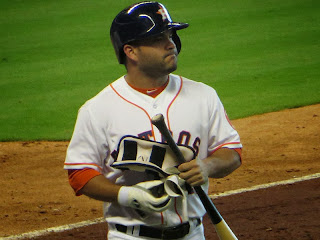 Jose Altuve is an interesting young player, but the Houston Astros have too few of them (Eric Enfermero/Creative Commons Attribution-Share Alike Unported 3.0 license).

The news came in Monday that the Houston Astros played a baseball game on Sunday afternoon and their Nielsen rating came in at 0.0. Dashes. Nothing. Out of 581 Nielsen sets in the Houston area, none of them were tuned to the Astros.

And if that news makes your head turn, it's really not stunning. The Astros have been absolutely terrible for three years now, their move to the American League this season has disappointed their fans, it is football season, football is king in Texas, Houston's NFL team is a playoff operation, and those Houston Texans were playing at the same time as the Astros.

The Houston Chronicle noted that a few sports bars showed the Astros on a television here and there, but sports bars aren't counted by Nielsen. About a sports bar in Houston that would show the Astros on a Sunday afternoon in late September when they're 42 games out and the Texans are playing for glory, all one can say is that such a place has the right idea about baseball and is strongly worthy of patronage. Try finding the Dodgers on a television set in Los Angeles when the Los Angeles Lakers are playing in the NBA. You've got a better chance of spotting Halle Berry in a flea market at Crenshaw and Washington.

So, the task here is not to demonstrate that Houstonians aren't sufficiently interested in baseball, but just to illustrate how badly the Astros have faltered. No one can be blamed for preferring to watch the Texans. We haven't seen a baseball team go so poorly as the Astros in 50 years, and such a team is difficult to endure.

The Astros, rebuilding from the bottom, won 56 games in 2011, a .345 winning percentage. When a team wins that little, it probably has put up with some young player mistakes, expecting improvement the next year. But the Astros won only 55 games in 2012. This year, the Astros have 51 wins so far, and it's unlikely that they will win 55.

The New York Mets began life in 1962 with 40 wins, and they didn’t win more than 53 games in their first four seasons. So, the Astros aren't that bad. But they are the worst to come along since then. The Astros weren't even this poor when they began life as the Colt .45s in 1962.

It could be, maybe, that the Astros actually are a little better now than they were a year ago, and their move to the tougher American League makes them look worse. Could argue about that. What can't be argued is that the Astros are making serious progress. They're not. Turns out, that 2011 team had very little young talent to speak of. The Astros still have Jose Altuve, Brett Wallace and Jordan Lyles from that group, and Chris Johnson has gone on to succeed with the Atlanta Braves. Meanwhile, the Astros turn over young players rapidly and consistently. They keep making themselves younger, but they never make themselves better.

Ran into Gerry Hunsicker at Dodger Stadium not long ago. He's a consultant now for the Dodgers. Starting from scratch in 1991, the Astros owned a nice group of young talent, and they just didn't put it together through the next few seasons. The Astros hired Hunsicker as general manager in 1995, and he was the man who figured it out. In Hunsicker's 10 years, the Astros won their division four times and went to the playoffs five times.

But the owner, Drayton McLane, really didn't understand player development, and the organization started getting fallow. Hunsicker resigned after the 2004 season. In 2005, an Astros team Hunsicker built went to the World Series. But that group already was gasping its last breath, and the organization was not developing its next generation of talent. The Astros kept trying to patch it together for five years after that at the big league level, until, finally, they had nothing left but to rebuild.

Major league teams rebuild all the time. Seldom, though, do we find an organization that not only has no major league talent, but also has no minor league talent. When the Astros began to rebuild, they had to rebuild the whole thing. They have been so depleted through the years that they basically are an expansion team, except without benefit of an expansion draft.

Asked about the Astros, Hunsicker just shook his head, a little bit sad. He knows what has happened there. Years of infrastructural neglect.

The Astros keep cycling in new, young players now, trading anyone with a little value as they try to stockpile prospects from other teams. They have some promising guys, like Altuve, Lyles, Matt Dominguez and L.J. Hoes, all of whom are 23 or younger. But the talent gap between the Astros and the big league contenders remains enormous.

And three years of losing two out of every three days becomes very tiring. So, given the Texans, Houston fans watch the Texans. Who can blame them?