Winning a wildcard playoff position today merely requires that some team be the fifth best in its league. As the Cleveland Indians have demonstrated this season, the chance of being fifth best doesn't necessarily fire up the fans. 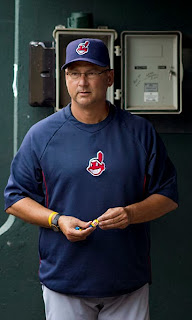 Cleveland Indians manager Terry Francona once slayed the Curse of the Bambino in Boston, and now he is likely to take the Indians to the playoffs (Keith Allison/Creative Commons Attribution-Share Alike 2.0 Generic license).

Here we sit now at the end of September, and they got it half right. The Indians go to the final day of the regular season holding the lead wildcard position in the American League, assured of no worse than a playoff game to get into the playoffs should they lose their regular season finale to the Minnesota Twins Sunday in Minneapolis.

Not bad for a club that won 68 games in 2012, finishing 20 games back in a slow-paced  American League Central.

The Indians hired a new manager with a winning track record and spent $125 million for six new players. The Indians promised that they were trying, and the club made those same promises throughout the season.

But Cleveland fans didn't bite. The Indians actually drew worse this year than in 2012, failing to reach even 1.6 million in attendance. The Tribe finished this year's turnstyle count at 1,572,967, an average of 19,419 per game, which is 379 fewer per game than last season. Only seven times this year did the Indians draw 30,000 at home.

During a glorious period in the 1990s, which followed four distinctively inglorious decades, the club owner was Dick Jacobs, the joint was called Jacobs Field, and the Indians sold it out 455 consecutive times. Now, the owner is Larry Dolan, and it is said that Indians fans hate him. The joint is called Progressive Field, and people don't go there as much.

So, the season began with that promise, the verb, by the front office, which isn't to say it started with promise, the noun. The Indians brought in Terry Francona, the man who broke The Curse of the Bambino in Boston, as the field manager. They signed a likeable and productuve Ohio guy, Nick Swisher, to swing the bat. They signed Michael Bourn to play center field. And none of this made a huge splash. No one was saying the Indians were about to unseat the Detroit Tigers in the AL Central. And that, really, in the end, is all that's worth saying, as far as fans are concerned.

There was sort of a pin the tail on the donkey feel to what the Indians were doing, a belief that, maybe, maybe, maybe, if everything went about perfectly and the worst AL Central teams were weak enough and the Indians could beat on them, they could sneak up to a wildcard spot against the behemoths of the AL East. The Kansas City Royals had the same idea. It wasn't a buzz, or even what we might call a hope. A prayer, maybe. The problem is that fans don't really like prayers. They like expectations, even if they might be jilted. In a lot of businesses, it's a good idea to under-promise and over-deliver. Baseball is different.

At no point in this season were the Indians overmatched. And at no point in the season did that fuel motivating expectations among the fans. The Indians rolled up a nice little start and actually led the AL Central as late as May 23. They took a few lumps, then, losing 16 of 21 through June 11 to fall 5 1/2 games out of first place. And there they stayed, more or less, always a handful of games behind the Tigers, never actually threatening the division lead again, but never rolling over, either.

An eight-game winning streak ending on Aug. 1 pushed the Indians to 60-48, two games behind the Tigers. But they were even further behind the Tampa Bay Rays, who were positioned as the top wildcard at 64-44. The Indians were positioned with the Texas Rangers and Baltimore Orioles for the second wildcard. The fans still weren't drooling.

Closing out August, the Indians were 72-64, 8 1/2 games behind Detroit, and in fourth place for the second wildcard, 4 1/2 down. They had a nice season going with a month left. But it wasn't the kind of thing that's going to engage Ohio sports fans at the start of football season.

So, the Indians kind of snuck up to this thing. When they began their final homestand on Sept. 19, they were one-half game out of the second wildcard. A robust crowd of 12,167 greeted them as they took the field against the Houston Astros. Cleveland fans seemed much more concerned that their NFL team was 0-2, their mediocre quarterback was injured and their new front office traded away their best running back, who was third overall pick in the 2012 draft by their old front office.

And thus began a nine-game Indians winning streak that has brought us to this point. Those in the know said the Indians had to be taken seriously for a wildcard spot because of their soft remaining schedule, and they knew. The Indians tacked up four straight wins against the hapless Astros, then two wins against the Chicago White Sox to finish their home schedule.

The first of those White Sox games finally captured a little attention. The Tribe's unreliable closer, Chris Perez, gave up two runs in the top of the ninth, but Jason Giambi hit a two-run homer in the bottom of the ninth for a 6-5 win. The Indians moved into the second wildcard position, a game behind Tampa Bay and a game ahead of Texas. The next day, Sept. 25, a respectable 30,942 showed up for the Indians' final home game of the season, an afternoon affair against the White Sox. The Indians won again, for the sixth straight time, 7-2.

The Indians then went to Minnesota, where they have won three straight going to the final game of the season. A win would give the Indians another home game in the one-and-done wildcard round against either the Rangers or the Rays. One and done. It just doesn't seem like very much about which to get excited.

Following the Indians, we might see some losers angling to become the fifth best team this winter. Maybe a club like the Seattle Mariners or Milwaukee Brewers will add a pitcher and a first baseman, then hope that a couple bounces will make them fifth best. And the front offices will try to sell that hope to their fans. And the fans won't buy it, because fans simply do not get off on hoping to be the fifth best team.

Maybe, though, the fans will get off on being in the playoffs. If they last long enough.