NL Central race is as good as it gets

Is the National League Central division race any worse for the fact that none of its three contestants will be eliminated for falling short? No, that actually makes this race better. Because the wildcard team enters the playoffs so marginally, winning the division is everything, and we have three good clubs going at it. 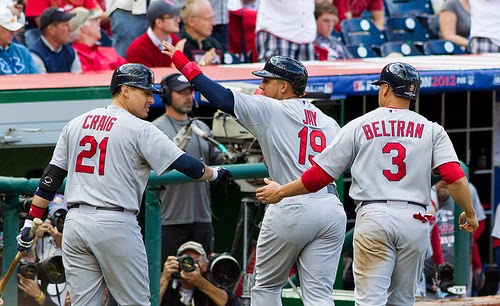 The expansion to five playoff teams in each league is supposed to increase the total September intrigue. But in the National League this year, all of the playoff contestants were identified, really, before August was done. Does that mean we have little suspense?

In the National League East, the Atlanta Braves won 14 straight between July 26 and Aug. 9, expanding their lead over the Washington Nationals from eight games to 15 1/2. The Nationals are 24-8 lately, including a dramatic double-header win against the Braves on Sept. 17, but the Braves still clinched on Sept. 22. The Nats still have about a one percent chance of stealing a wildcard bid. They have seven days to make up five games.

Same kind of thing in the National League West. The Dodgers dropped a bomb on this division and destroyed it, hitting that 42-8 stride the game hadn't seen in more than 70 years. From June 22 through Aug. 17, the Dodgers improved from 30-42 to 72-50, turning a 9 1/2-game disadvantage into an 8 1/2-game lead. After taking a break to lose a couple, the Dodgers bit off another 11 out of 14, increasing their lead to 13 1/2 on Sept. 3. The Dodgers lost nine of 13 after that, but they clinched last week, anyway, and the Arizona Diamondbacks always were well short of a wild card.

So, all the tension of three playoff races is boiled into one, which is the race for the National League Central championship. It's rare for the NL Central to have such gravity about it. These are the teams of fly-over America, where the markets aren't as rich, the lights aren't as bright, and the budgets aren't as high. But the division has produced three formidable teams whose characters are well known, and all are going to the playoffs. The stakes remain high. The division winner has the secure berth in the playoffs, and the other two will submit to a one-and-done wildcard game against each other.

The St. Louis Cardinals are the team around here that understands the playoffs. The Cardinals have only won the division once in the last six years, but they are a 21st century playoff power, going to the postseason nine times with 13 series wins, three pennants and two World Championships. In 2011, the Cardinals stole the wild card spot from Atlanta and rode that heist all the way to the World Championship. Last season, the Cardinals entered as the tag-along second wild card, but lasted through two rounds of playoff opponents and didn't succumb until Game 7 of the National League Championship Series.

Contrast that track record with the Cincinnati Reds, who, on account of their checkered postseason history, enter the playoffs with more to prove than any other team. The Reds have won the division two times out of the last three, and they could make it three of four right here. Somehow, no one thinks of this as a great team, and that's all because of the postseason.

Their 2010 division title was a little less persuasive after the Reds went down in three straight against the Philadelphia Phillies, possibly in the least contested playoff series ever. They lost the opener to Roy Halladay's no hitter, made four errors in the second game to blow a 4-0 lead and lose, then gave pitching ace Johnny Cueto nothing to work with in a 2-0 loss. It was as if the playoffs were too big for them.

The Reds returned to the top of the division in 2012 and tanked again in the playoffs. The Reds won the first two on the road in their divisional series against the San Francisco Giants, and needed to win only one of the next three in Cincinnati. But the Reds lost the first of them, 2-1, in 10 innings. Next two games, the Giants mugged the Reds in their own yard, and the winning by scores of 8-3 and 6-4, and Reds fans sat by dumbfounded while the Giants went on to play, of course, the Cardinals.

To that mix, which has really stirred the pot in this division for the last three years, we add an underdog, a true sentimental favorite. Any inclination about treating the Reds sentimentally is wrong, because the Pittsburgh Pirates are even more sentimental. They've already celebrated their first winning season in 20 years this month. The Pirates have pitched their way there, tied for second in NL ERA at 3.29, while they tweak an offense with only one great player, Andrew McCutchen. On the principle that every little hit helps, the Pirates have added veterans Marlon Byrd and Justin Morneau to their mix, but they still only scored nine runs in a five-game stretch last week against the Chicago Cubs and the San Diego Padres.

It's irresistible to say that the Cardinals are leading because they hit in the clutch. With two outs and runners in scoring position, the Cardinals were batting .301 with an .813 OPS entering last weekend's games. The league averages were .227 and .676. Just going back through this short century on baseball-reference.com, you don't see teams batting .300 in that situation. You see a team once in a while bat .280, and sometimes an OPS is higher. But one almost never finds a team so much better than the rest of the league in that little aspect.

The Cardinals had 707 plate appearances with two out and runners in scoring position, pretty close to the league average of 693.3. That's already odd – isn’t it? – because one would expect success in that situation to create more situations of that type ("two-out RISP"). When you get a hit with two out and runners in scoring position, you still have two out, and there’s a good chance of a runner in scoring position. Anyway, the Cardinals scored 241 runs in those plate appearances, against a league average of 182.8. The next most productive team, the San Francisco Giants, had 203 runs with two out-RISP.

The Cardinals aren't setting any records. The Philadelphia Phillies scored 300 runs in that deciding circumstance in 2007. What's striking is that the Cardinals were hitting .300 while the rest of the league did so terribly. The league average usually is around .235-.240, and the league is averaging .227 this year. The Cardinals, overall, scored 738 runs, 68 more than any other team and 123 more than the league average of 615.733. Their margin over the next best team with two out and scoring position was 38 runs, and that margin over the average is not even 60 runs. So, hitting with two out and runners in scoring position is some of what's happening with the Cardinals, but not all of it.

When one accepts that clutch hitting is not considered a repeatable skill, then it becomes evident that the Cardinals' advantage against every other team in this regard is not sustainable. It's only a short hop to wondering if the probabilities back toward the mean are in store for the Cardinals, and when. But another short hop disarms us: Does it really matter?

In 2001, the Colorado Rockies tore up two outs and scoring position, batting .281, with an .837 OPS and 292 runs, 59 more than any other team. Rockies had 855 plate appearances, many more than the Cardinals will reach. The Rockies also were a last-place team in 2001. Hitting with two out and runners in scoring position isn't as helpful if you're already four runs down.

One more matter, not small. The Cardinals probably are without Allen Craig for the rest of the season after he sprained his foot on Sept. 4 in Cincinnati. Craig has been the Cardinals ring leader with two-out RISP, batting .448 (26 for 58) with 38 RBI and a 1.202 OPS. But the Cardinals aren't destitute. Matt Holliday, Matt Carpenter, Matt Adams and Carlos Beltran all are above a .940 OPS with two-out RISP.

In a manner of speaking, the Cardinals are in the clubhouse with the lead, having no games left with the Pirates or Reds. But the Cardinals have three each coming against the Washington Nationals and Chicago Cubs, and they're not safe. In baseball, you never know.

Beneath the Cardinals and Pirates, we find a shadow contender, the Reds, who have, after all, won this division in two of the last three years. But the Reds have not held first place this year since April and they have never mounted a strong bid to take over. They've just sat on the fringe, well enough to win a wild card, always sustained, it seems by a sense that the Pirates just can't hit enough and the Cardinals, at some point, have got to start making that third out.

None of that has happened, at least not enough to move the Reds up the standings. But, with a week left, there they sit, two games behind the Cardinals and tied with the Pirates after winning two of three in Pittsburgh during the past weekend. At this point, of course, winning the division would be a feat of heroism for the Reds, who have not etched themselves as an especially heroic team.

But you never know in baseball, and, in this division, we really don't know. The Cardinals play three this week at home against Washington, which is poised to end Davey Johnson's managerial career with a flourish. The Nats are the hottest team in the NL. And you know they want to spoil the Cardinals after losing to them in last year's divisional series. The Cardinals will end their season this weekend with three at home against the Cubs, who did win two of three in the shadow of the arch from Aug 9-11.

The Cardinals lead on the morning of Sept. 23 by two over the Pirates and Reds. Division races don't get better than this, even though the outcome will eliminate none of these teams. Then again, it probably is because all these teams are too good to be eliminated that the race has this kind of juice.