David Ortiz already was a postseason legend before Sunday night, but he keeps playing, so he keeps hitting crucial home runs to change playoff games. Ortiz hit an eighth-inning grand slam for the Boston Red Sox to tie Game 2 of the American League Championship Series, and the Red Sox went on to beat the Detroit Tigers, 6-5. The series now is tied, 1-1. 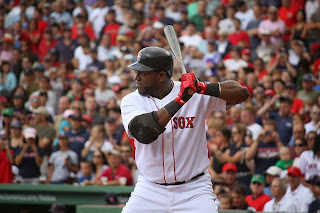 We could recap all the great Big Papi moments in postseason history, but why bring up any of the others now?

David Ortiz hit his 15th postseason home run for the Boston Red Sox Sunday night. This one, like many of the others, was historic, the first grand slam ever to tie a postseason game in the eighth inning or later. It came when the Red Sox were doomed. Because of it, perhaps, the Detroit Tigers are doomed. They certainly were doomed for the rest of Sunday night’s game.

For all the remarkable Red Sox feats of recent postseasons, it really has been Ortiz who pulled them, and pulled the Red Sox with him. Coming back from down 2-0 against a Tigers pitching staff that had allowed six hits in just less than three full games would have been right with any of them. But what happened instead is right with that, another remarkable Red Sox postseason feat, pulled by Ortiz, who pulls right-handed pitches 400 feet.

The Red Sox trailed, 5-1, going to the bottom of the eighth inning in Game 2 Sunday. Detroit starter Max Scherzer no-hit the Red Sox until there was one out in the sixth. The Red Sox had no life.

But they started to stir in the eighth. First, Will Middlebrooks, their weakest hitter, doubled with one out against reliever Jose Veras. Tigers manager Jim Leyland, whose parades of eighth-inning pitching changes introduced 11-man pitching staffs to the big leagues about 25 years ago, brought in left-hander Drew Smyly to face Jacoby Ellsbury. But Smiley walked Ellsbury, and Leyland called on Al Alburquerque to face Shane Victorino. Alburquerque struck out Victorino, but Dustin Pedroia followed with a single to load the bases. So, Leyland brought in his closer, or his closest to it, Joaquin Benoit, to face Ortiz, Boston's most dangerous man.

And Big Papi did it what Big Papi does, because a big situation calls for Big Papi. First pitch, a laser to right field, so low that Tigers right fielder Torii Hunter might have snagged it with his leap over the fence if he were but a foot taller, but so far that it reached the back of the Red Sox bullpen.

The whole drift of the series shifted. The grand slam tied the game, 5-5, drove Red Sox fans out of their minds and, honestly, dropped jaws everywhere else, even the jaws of those who knew that Big Papi was just the man to hit this home run, which is to say, anyone who follows the game. It gave the Red Sox new life and an emotional lift. It sent the Tigers on a clear, evident emotional slide. And it really tied the series.

The Red Sox scored the winning run in the bottom of the ninth the way runs score against teams that suddenly are disoriented, like the Tigers on Sunday night at Fenway Park. Leading off, Jonny Gomes hit a ground ball deep into the hole at short, prompting an overthrow by Tigers shortstop Jose Iglesias, putting Gomes on second. Detroit reliever Rick Porcello threw a wild pitch, putting Gomes at third. And Jarrod Saltalamacchia hit a sharp grounder to left through a drawn-in infield to drive in Gomes and give the Red Sox their 6-5 victory.

But what would that have been without Big Papi? And where would the Red Sox be without him? Where would they have been in 2004 without him? And 2007, for that matter? Or any other year? Where were they with Ortiz playing in only 90 games last year? Remember?

On the Pedroia single, Red Sox third base coach Brian Butterfield threw a hard stop sign at Middlebrooks coming to third. That's good coaching. He's not taking the bat away from Big Papi. The Red Sox know where they would be without him. It's easy enough to remember.

And where are the Tigers now? Right back where they were a year ago. Trying to figure out how to finish a game with the lead. Right smack one year after they had to give up on their closer, Jose Valverde, because he suddenly couldn't do a job that he'd done as well as anyone in the game for about six years, the Tigers still don't have an answer. It's already been costly.

They handed the problem this year to Benoit, 35 years old, a 12-year veteran who had never been trusted with the closer's role in his life. The Tigers couldn't find anyone better. They couldn't find a better pitcher to protect all their other investments in winning baseball games. Strange. The Kansas City Royals can do it. The Chicago White Sox can do it. But the Tigers never solved that problem.

It did look for a while like Benoit knew the answer. The Tigers gave him the role at the end of June, after auditioning Valverde again, and he embraced it for a time. From June 28 through the end of August, he hit 13 saves in as many chances, tacked up a 0.81 ERA and held hitters to a .200 batting average. He only gave up runs in two of 22 outings during that stretch.

But September called, the games grew in importance, and Benoit wasn't quite as big. On Sept. 1, he entered a scoreless tie in the ninth and allowed four runs against the Cleveland Indians while only getting one hitter out. During the last week of the regular season, he blew two saves. And in the American League Division Series against the Oakland Athletics, he allowed two earned runs in 3 1/3 innings.

Taking his last eight appearances, going back to Sept. 23, Benoit has allowed five earned runs in 7 1/3 innings. He had never been a closer before and, now that the Tigers need him to be one, he just isn't a closer. He's just the best guy the Tigers have.

And he's not up to the moment with Big Papi. Few men are.

And because the Red Sox have Big Papi, and the Tigers have to match him with Joaquin Benoit, the Tigers will forevermore be haunted by their big leads late in games, just as they were haunted last year during the postseason.

None of this is to put down Benoit. He's had a 12-year career in the Major Leagues. You don't do 12 years in the big leagues without being able to pitch.