Braves will lose for lopping off lefty Maholm

The Atlanta Braves probably lost their National League Division Series with the Dodgers before it started. Quality left-handed pitching is the one proven way to slow down the Dodgers when they are at their best, and the Braves decided to short themselves of left-handed starters. 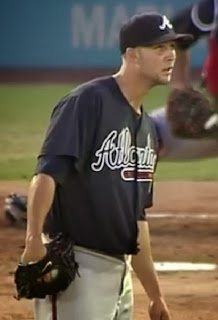 Lefty Mike Minor did the Dodgers in Friday afternoon. For whatever reason, the Atlanta Braves elected to not have any other left-handed starting pitchers (Public domain image).

After the Atlanta Braves evened up their National League Division Series with the Dodgers on the strength of six strong innings from left-hander Mike Minor Friday, it's more evident than ever that the Braves gave the series away when they set their pitching staff.

Maholm qualifies. He finished the season with a 4.41 ERA to go with his 10-11 record, but he is a veteran with some guile, and he was effective against the Dodgers – two starts, 13 1/3 innings, 12 hits and three earned runs (2.03 ERA) with three walks and six strikeouts.

The one hope for the Dodgers, we supposed, would be the return to form of Matt Kemp, who hits left-handers better than anyone. That possibility crumbled, though, when the Dodgers disabled Kemp at the end of the season.

Then, the Braves gave the Dodgers a gift, putting only one left-hander in their rotation for this series. With all the information and intelligence that goes into running baseball teams nowadays, it's remarkable that the Braves could just miss that.

We don't really know who made that call. Somehow, though, general manager Frank Wren and manager Fredi Gonzalez decided to take on the Dodgers with only one left-handed starter.

On July 29, when we first touched on this, the Dodgers' .261 batting average against lefties led the league, their .321 on-base percentage ranked third, their .401 slugging average ranked third and their .721 OPS ranked second. When the season ended, the Dodgers were batting .253 against lefties (seventh), with a .315 on-base percentage (eighth), a.391 slugging average (seventh) and a .706 OPS (sixth). So, it's not merely that the Dodgers finished where they finished, but how they finished, which had to be at even lower rates during the last two months to bring down those averages.

Minor gave up a run in the first on a Hanley Ramirez double Friday, then the Dodgers didn't advance anyone else to second base through the fifth inning. The Braves won, 4-3, bringing the best-of-five series to a 1-1 tie.

It defies explanation, perhaps, but the Dodgers have a lot of right-handed batters who hit better against right-handed pitchers. And they have no left-hander hitters who hit better against left-handed pitchers. Left-handers especially neutralize Carl Crawford at the top of the Dodgers order, and, unless Nick Punto is playing, the bottom of their order is useless against lefties.

It would seem that the smart play for the Braves would have been to start Minor in Games 1 and 5, and Maholm in Game 2 or 3. That way, they get the majority of starts by left-handers. The Braves still could audible to rookie lefty Alex Wood for a start, but that’s not in the plans and he already has been used once in relief.

So, the Dodgers don't have to face another left-handed starter for the remainder of the series, which picks up with Game 3 at Dodger Stadium Sunday afternoon. That’s enough to make the Dodgers a rather comfortable favorite to win the series, perhaps as soon as Monday.