Not only are the Pittsburgh Pirates in the playoffs for the first time in 21 years, but they arrived with the big arm that can keep them there for a while. Rookie Gerrit Cole from UCLA quieted the St. Louis Cardinals and their crowd in Game 2 of their National League Division Series Friday. 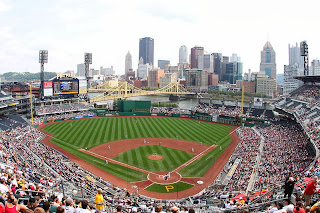 So, Pittsburgh has playoffs for the first time in 21 years, and this delightful setting at PNC Park will greet a home team that has a chance to advance (daveynin/Creative Commons Attribution 2.0 Generic license).

Anyone will tell you that winning in the postseason is tied to big arms on the pitching staff. Against batting orders that are good enough to enter the playoffs, finesse won't often enough get it done.

The Pittsburgh Pirates trotted out their big arm Friday, rookie Gerrit Cole from Orange Lutheran High and UCLA, the first overall pick just two years ago, in 2011. Say high draft picks don't make an immediate impact in baseball? True. Cole's impact is about as immediate as it gets. Thus, he has proved to be an astute No. 1 selection, perhaps even better than Bryce Harper (2010). The Pirates seasoned Cole for 38 minor league starts before bringing him up in early June, and he produced 10-7 with a 3.22 ERA.

Splitting the first two on the road, the Pirates now have the upper hand. The next two games go back to PNC Park, where a rabid crowd influenced the Pirates' wildcard win against the Cincinnati Reds Tuesday night. Two wins in Pittsburgh would send the Pirates to the National League Championship Series.

Cole already is the ace of the Pittsburgh staff. He is the guy who stops losing streaks. Following losses now, including the playoffs, Cole is 7-1 with a 2.37 ERA. Mostly, he's the big arm, the right arm that throws 100 miles per hour into the sixth inning.

When Cole took the ball for Game 2, it wasn't a do or die situation, but it was do or death watch. In Game 1, the Pirates called on veteran A.J. Burnett, which is perfectly fine and appropriate in view of Burnett's veteran leadership of that pitching staff. But we already knew from Burnett's days with the New York Yankees that he gets stage fright, and no one should have been too surprised when he allowed seven runs without getting anyone out in the third inning. The Cardinals won, 9-1.

So, Pirates manager Clint Hurdle gave the pill to his rookie from UCLA in Game 2, and he never let the St. Louis crowd feel too good. A day after celebrating a seven-run third inning, the Cardinals fans had to watch their hitters go back to the dugout and sit.

The series resumes Sunday, with left-hander Francisco Liriano going for the Pirates against St. Louis rookie right-hander Joe Kelly. There has never been an NLDS game played in Pittsburgh. The crowd at PNC Park will be ready for the first.