It seemed as though the entire Dodgers organization had a collective synaptic misfiring Friday, when they set their roster for the National League Championship Series quite questionably, then performed questionably in Game 1. It still took the St. Louis Cardinals 13 innings to beat them, 3-2. 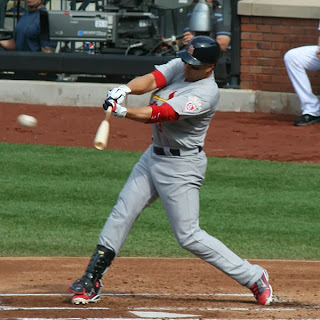 The Dodgers were so air-headed Friday that they just about had to lose their National League Championship Series opener to the St. Louis Cardinals, and they did.

The in-game decisions by players and manager alike are sure to be turned over endlessly if the series ends with the Dodgers losing. Upper management didn't cover itself with glory before the game, either. The Dodgers now are down, 1-0, with Game 2 coming up at 1 p.m. PST Saturday in St. Louis.

First, the game. The Dodgers lost, 3-2, in 13 innings. The end came after Dodgers reliever Chris Withrow gave up a single to Daniel Descalso and a walk to Matt Carpenter with one out in the 13th. The Dodgers manager, Don Mattingly, had no choice but to call his closer, Kenley Jansen, with Carlos Beltran coming to the plate.

You hate to use your closer in a tie game on the road, which is why Jansen didn't start the inning. But Withrow couldn't keep the bases clean, so the tying run moved into scoring position and, at that point, the situation is desperate. Jansen is his best guy in the bullpen, and Mattingly's best chance to keep the run from scoring.

Jansen threw strike one, then three straight fastballs too low, running the count to 3-1. At that point, Beltran had a free swing. Jansen threw the next fastball away and about knee high, Beltran took his rip and bolted it into right field to drive in Descalso. Game over.

But the Dodgers lost this game in so many other ways. Players didn't come through enough to get the job done earlier. Dodgers hitters were one-for-10 with runners in scoring position. They didn't knock out Cardinals starter Joe Kelly when they had several chances early.

The keynote was set in the first inning, when the Dodgers put runners at second and third with one out. Adrian Gonzalez and Yasiel Puig struck out to end the inning. The Dodgers scored twice against Kelly in the third, but it amounted to minimal damage. Bases loaded, one out, Puig grounded to the pitcher, who threw home for a force out. Next, Juan Uribe singled through the middle to drive in two runners and move Puig to second base. Andre Ethier then flew out to center field, ending the inning.

The Cardinals came right back in their half of the third after their first two batters, David Freese and Pete Kozma struck out. Kelly somehow singled to left, then Dodgers starter Zack Greinke walked Carpenter. The next man up, Beltran, hit a drive to the center field wall. Ethier, rusty from not playing for a while in the outfield, came close to catching it at the wall, but missed. Two runs scored, tying the game, 2-2.

The game stayed that way until the 13th inning. Though the 10th inning, the Dodgers sent up only two more batters than the minimum. They could get nothing started. Seeing precious few scoring opportunities, Mattingly sent in Dee Gordon to punch run for Gonzalez after a leadoff walk in the eighth. Very interesting decision.

Why would you make it? Because you're not getting people on base, and you have a couple hitters coming up -- Puig and Juan Uribe -- who can give you a jolt. In fact, Uribe has four RBI in the last two games. A double by one of these players drives in a run if Gordon is running, and not if Gonzalez is running.

Why would you not make it? Because you don't want to take Gonzalez and his bat out of the lineup in a game that could be going to extra innings. And because you're probably not trying to steal second base against Cardinals catcher Yadier Molina, who threw out 43 percent of attempting base stealers this year. It's a move that says you're trying to take the lead right now so you can close it out with Brian Wilson pitching the eighth and Jansen pitching the ninth.

Mattingly’s explanation was a little disturbing. By the accounts, it went like this: “If we don't use (Gordon) there and the next guy hits a ball in the gap and he doesn't score and we don't score there, we're going to say, 'Why didn't you use Dee?’”

Sounds too much like Mattingly is wary from constant second guessing, and he sought to guard himself from another second guess. The problem is that people watching the game questioned it as a first guess.

Anyway, it didn't work. Puig hit into a force and Uribe hit into an inning ending double play. It was the first of three double plays that would end Dodgers innings. Michael Young, who replaced Gonzalez, hit into both of the others.

Young once was an excellent batsman who tacked up 200 hits in multiple seasons because he hit the ball hard to right field. But he turns 37 next week and he no longer has the bat speed of a .315 hitter. He's more like .275 or .280, which is better than most, but the difference shows up against postseason quality.

Many commentators have complained that having Young bat behind Hanley Ramirez took the bat away from Ramirez, as the Cardinals intentionally walked Ramirez in the 10th and 12th innings with Young on-deck. It's much more sensible to suppose that if you're the Cardinals, you're not letting Ramirez beat you even if Gonzalez is up behind him. The real damage from missing Gonzalez lies in the fact that he's simply a better hitter than Young and, being left-handed, he might have forced some uncomfortable decisions on Cardinals manager Mike Matheny.

With one out in the tenth, Mark Ellis tripled for the Dodgers. One wished at that point for Gordon to be available. But he wasn't, and the Cardinals walked Ramirez so they could pitch to Young. On a 1-0 pitch, Young hit a lazy fly ball to medium right field, with Beltran coming in on the ball to catch it.

Beltran is well known for his arm and Molina is well known for his excellence at blocking the plate. Ellis is not well known for his speed. But Ellis tried to score on the fly ball, with predictable results. He was out by several feet. There was some question of whether Molina actually tagged Ellis, but even Ellis conceded that he was out. When there's a collision at home plate and the catcher hangs onto the ball, he will get that call every time.

Nothing went right for the Dodgers in this one. Their roster setting decisions before the game didn't go right, either. Facing a St. Louis team that batted .238 against left-handed pitching this season, the Dodgers decided to leave lefties Paco Rodriguez and Chris Capuano off the NLCS in favor of right-handers Edinson Volquez and Carlos Marmol.

Mattingly told reporters that management discussed that call for five hours. One has to wonder what goes down in a decision making process that last five hours and lands on removing two lefties from your staff when you're playing a team that doesn't hit them.

But that's how the day went for the Dodgers. Not a very promising start to the NLCS.