Dodgers have right matchups to beat St. Louis in NLCS

With all the metrics going around baseball these days, the simplest might still be the most predictive. And when we look at the simple numbers pertaining to right-handers against left-handers, it becomes very hard to believe the St. Louis Cardinals can last against the Los Angeles Dodgers in the National League Championship Series. 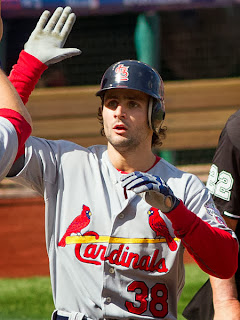 The St. Louis Cardinals bagged two of their three wins against the Dodgers this year because Pete Kozma (above) hit two doubles against Clayton Kershaw. What are the chances of that happening again? (Keith Allison/Creative Commons Attribution-Share Alike Generic 2.0 license).

The Dodgers will begin their National League Championship Series (NLCS) this evening against the St. Louis Cardinals in St. Louis, seeking their first trip to the World Series since 1988, when they posted an unlikely victory against the heavily favored Oakland Athletics.

The predictions are running about even. Outwardly, at least, it does shape up as an even series between two divisional championships.

However, a couple aspects of this matchup indicate that the Dodgers enter with compelling advantages. Simply, the Dodgers match up very well with the Cardinals. Although the Dodgers won the season series only 4-3, a couple of those Cardinals wins turned on occurrences that one would not expect to come up with any regularity.

We have mentioned several times here that the Dodgers are vulnerable to left-handed pitching, and when their National League Division Series (NLDS) with the Atlanta Braves was tied, 1-1, we went so far as to say that the Braves lost the series before it started because they shorted themselves on left-handed pitching.

But do you know who really can't hit left-handed pitching? The Cardinals. They are absolutely the worst team in the National League at hitting left-handed pitching. And the Dodgers will throw them at least two left-handers in the first four games, and four, maybe even five, if it goes seven. That depends on how the Dodgers approach Game 4, for which they have not announced a starting pitcher.

We already know the Dodgers will send lefties Clayton Kershaw and Hyun-jin Ryu to the mound in Games 2 and 3. If they're feeling adventurous, they might want to try lefty Chris Capuano in Game 4. Generally, you'd rather throw power pitching at the Cardinals -- generally, you'd rather throw power pitching at everybody every day -- but it will depend on how the series progresses. If the Dodgers hold a 2-1 or 3-0 lead going to Game 4, Capuano is a good call. If Capuano can maintain an effective sinker-changeup game, he can lock them up (compare this and this with this).

On the flip side, knowing the Dodgers at the top of their game can only be slowed down by a good left-handed starting pitcher, the Cardinals don't have any. They only threw 21 starts by left-handed pitchers all year, and none of their left-handers figure in their rotation for the NLCS.

This is Christmas for the Dodgers. As we've noted before, showing a lefty to the Dodgers turns leadoff hitter Carl Crawford into nothing. Against lefties this year, Crawford batted .206 with a .551 OPS. Notice, Crawford wasn't nothing against the right-handed Braves. He hit three homers.

In short, the Dodgers have virtually no chance of scoring against lefties until the order turns to Yasiel Puig and Hanley Ramirez.

The Dodgers will have to worry about none of this for the first five or six innings of any game, unless, of course, they beat up the Cardinals right-handed starters well enough to send them showering.

Moral of the story: Don't throw right-handers at the Cardinals. The Dodgers shall take heed, because that's how they are built. They can -- and will -- make the Cardinals deal with left-handed pitching.

That said, baseball is a funny game. It has often been noted that Kershaw lost twice to the Cardinals this year. But look at how it happened.

The first time was a 5-3 St. Louis win at Dodger Stadium on May 26. The Cardinals scored three times in the second inning when Kershaw walked two hitters and Kozma hit a three-run double to left. Kershaw left the game after allowing four runs in seven innings.

The second time was a 5-1 St. Louis win at Busch Stadium on Aug. 6. With one out in the fifth inning of a scoreless tie, Jay doubled against Kershaw, then Tony Cruz singled him in, Kozma doubled Cruz to third and Joe Kelly grounded out to drive in Cruz. The next hitter, Carpenter, grounded out to end the inning. Kershaw's line at the end showed six innings and two runs.

In essence here, Pete Kozma beat Clayton Kershaw twice. What are the chances of that lightning striking for a third time? If Kozma even puts a bat on the ball against Kershaw in this series, it might qualify as a major upset.

One more factor for the Dodgers, and this, again, pertains to Kershaw, who pitched six innings without giving up an earned run in the Dodgers' Game 4 win against the Braves to finish the NLDS. If the Dodgers hadn't won that game -- and they won it largely because Kershaw pitched so well -- then the NLDS would have moved to Atlanta with Greinke pitching Game 5. As it happens, Greinke instead is pitching Game 1 of the NLCS in St. Louis.

As it happens, Greinke has taken four starts at Busch Stadium in his career, and all of them have been quality. In none of them did he last fewer than six innings, and in none of them did he allow more than two runs. Greinke took one start this year in St. Louis, a 3-2 win on Aug. 5 during which he allowed two runs in 6 1/3 innings.

It also happens that Greinke took no starts this season in Atlanta. However, he has taken two starts during his career in Atlanta, and neither were quality, totaling 11 innings and seven earned runs for a 5.73 ERA. As it turned out, then, Kershaw's Game 4 outing set up Greinke for his favorable scenario and rescued him from his unfavorable scenario.

It's just breaking right for the Dodgers here. The Cardinals are an excellent team and they've got a postseason history that says they overcome the odds. But it always comes down to matchups, and the matchups clearly favor the Dodgers. For the Cardinals to prevail in this series, they will have to beat the odds once again.