Mattingly is winning ... or is he?

It would seem that Dodgers manager Don Mattingly's decision making is on permanent probation, and that he has a negative margin for error. In 2011 and 2012, he took poor Dodgers teams to winning records. In 2013, he took a good team to a division title before the end of August and now he has won the first round of playoffs in four games. But we still don't know if he has a 2014. 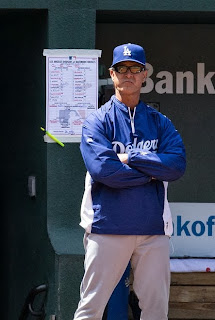 Do we get the idea that people are trying to fire Don Mattingly, no matter what?

When Juan Uribe hit that hanging slider about 500 feet Monday night, and Dodger Stadium shook, and the Dodgers snatched victory from dread to advance in the playoffs with a 4-3 win against the Atlanta Braves in Game 4 of their National League Division Series, we still didn't know if Mattingly was saved, and we still don't know. The Dodgers still haven't picked up his option for 2014. There's still a sense that Dodgers president Stan Kasten has someone else in mind, perhaps Tampa Bay Rays manager Joe Maddon, who was eliminated from the playoffs Tuesday night. And Mattingly still is being second guessed in the media for sensible decisions after a win.

What does this man have to do? In 2011, his rookie season, Mattingly guided a terrible ball club under dreary circumstances to a winning record. That already told us that he has an affinity for this work. In 2012, he had a nothing team for half the year, and a haphazardly unmeshed group of talent for the other half, and he came in with a winning record. This year, he made the pieces fit, all but wrapped up the National League West before the end of August and won the first round of playoffs in four games.

And when the Dodgers decide what they will do about Mattingly, it will be for reasons that we don't know. The reporters on the ground, covering the team, will get as much of it to us as they can, and they will know more about it than we do, but they, too, will be left with gaps in their knowledge to be filled with speculation. We can always speculate with them, and with their help, and we should, and we will. We can speculate and criticize, rightly and wrongly. Many of us have done it both ways, and we will continue to do so. If we didn't speculate so freely about our baseball teams, the baseball business wouldn't be nearly so lucrative. And even years down the road, when the central actors publish their self-serving books about what happened, it's still going to be guesswork.

Much of our guesswork issues from the reality that baseball management has become quite complicated. In the not so old days, maybe as few as a dozen years ago, the common division of labor had it that the general manager put together the team and the manager ran the game. That's a rough characterization. The lines were never precise. If, for example, the manager was a big star who had pull with the club owner, the general manager was weakened. In the very old days, when club owners might be baseball lifers going back to the origins of the major leagues, they might run the whole front office and write out the lineups. A fellow like Connie Mack would wear his coat and tie in the dugout and run the game.

In recent years, management structures within baseball teams are more complex, new techniques for understanding the game gained currency, and guys who never wore jockstraps began thinking they understood the game better than guys who never didn't wear jockstraps. Back when he was the general manager of the Oakland Athletics, it occurred to Sandy Alderson that the guy wearing pajamas and arguing with umpires was a middle manager, and it's just a small step to realizing that crucial business decisions were being made by middle managers, and in no other business do middle managers make so many crucial decisions. So, upper managers began assuming more control. Now, we get reports to the effect that field managers are being lectured by Harvard MBAs about who should be in the lineup.

In short, the field manager doesn't have the say that many of us think he does. A highly intelligent and successful field manager who makes a decision that goes badly will almost certainly catch hell from the front office, because there's always another decision that could have been made for reasons that are just as good. The event matrix within a baseball game can never be so precisely and specifically partitioned that a clear percentage move emerges from the data. And even if it could, the percentage is never going to be scientifically significant. In the end, players make plays. Or they don't. The manager's job is to put players in position to succeed, and that involves quite a lot more than lining them up in high percentage circumstances.

So, the Dodgers started left-hander Clayton Kershaw in Game 4 against the Atlanta Braves Monday night on three days of rest, the first time Kershaw has ever pitched on fewer than four days of rest. It has since emerged that Kershaw campaigned hard for the start during the course of several days. And he came through, pitching six innings without giving up an earned run. But guess what? After six innings and 91 pitches, he was tired. So, the Braves took a 3-2 lead in the seventh inning against reliever Ronald Belisario.

And we could see the flies circling around Mattingly's head as we envisioned the anxious Dodgers right-hander Zack Greinke taking the ball for Game 5 in Atlanta. The question even came from TBS play-by-play man Ernie Johnson, an Atlanta guy who inflected a noticeable fondness for the Braves: Where's Kershaw? Deciding to start Kershaw was cutting against Mattingly both ways. On one side, Kershaw on three days of rest tired after six innings, and now he wouldn't be there for Game 5. On the other side, Mattingly removed Kershaw too quickly in Game 4, especially after Atlanta manager Fredi Gonzalez spared the Dodgers manager a decision by pitching to the No. 8 hitter with two out and first base open when the Dodgers threatened in the bottom of the sixth. A.J. Ellis grounded out to end the inning.

Then the Dodgers batted in the bottom of the eighth, down, 3-2, and leading off with Yasiel Puig, the night's goat after hitting into a rally killing double play and misplaying a ball in the right field corner into a triple that later became the lead run. Puig atoned somewhat, smoking a pitch by Atlanta reliever David Carpenter into the right-center field gap for a double. And up came Juan Uribe.

Now, if you're the Dodgers, there is one scenario that you absolutely can't have. You do not want to be down by any amount going to the bottom of the ninth inning, because the Braves will use relief ace Craig Kimbrel, and that ends it. Like almost every team, the Dodgers are helpless against Kimbrel. The Dodgers actually are more helpless than most. Counting Game 2, the Dodgers were two-for-18 with 11 strikeouts and no runs, inherited or otherwise, against Kimbrel in 2013.

However, if you can tie the game, Kimbrel might stay seated. During the regular season, tied on the road, Kimbrel would certainly stay seated. Facing elimination, the Braves might use Kimbrel in a tie game on the road. But in that case, he has to get six hitters out to succeed, and he didn't get more than four hitters out all year.

So, Mattingly played to tie. Perfectly sound strategy. Absolutely correct. That's what The Book says. Play to tie at home. A lot of fans today with analytical pretensions hate The Book, but The Book has sound reasons behind it. Every move carries a little risk, but if you put the runner at third with one out, you have two cracks at getting him in to tie the game and minimize the effect of Atlanta's closer. You would rather not have the bottom of the order coming up, but you also can't expect Kimbrel to come in for five outs. Maybe four.

Perhaps Carpenter wanted to get the next slider up a wee bit. Perhaps, he overcompensated. The next pitch, a lollypop slider, 84 miles per hour, tumbled into the hitting zone letter high. Uribe hit the ball so hard that you could practically hear it explode. You could definitely hear the stadium explode. The ball landed well beyond the left field fence and in the back of the Dodgers bullpen. The Dodgers were winning this game, 4-3.

One redemptive swing of the bat. Uribe has been a bum in this town for three years, but he's a hero now. Dodgers general manager Ned Colletti will never hear another bad word about signing Uribe for three years and $21 million. The Dodgers are advancing. Mattingly is saved. For now. More or less.

But he still gets cat calls for bringing back Kershaw on three days of rest, and he's still second guessed for bunting with Uribe. And there's this idea going around that talent saved the Dodgers from Mattingly, as if he doesn't set a tone to maximize that talent. We're supposed to believe that Mattingly is no better than a lucky fool who fell into a pot of gold when the right decision was made wrong, then that wrong decision was made right by one redemptive swing of the bat.

So, the speculation continues about Mattingly in Los Angeles, and, perhaps, also around back rooms in the Bronx, USA, where New York Yankees manager Joe Girardi's is deciding if he will return. It stretches no part of the imagination to suppose that the Yankees are waiting this out, rather intrigued with the thought of bringing back Donny Baseball, who is more popular there than he ever will be here, no matter what he does.