The Boston Red Sox were the best team in the American League this year, at least so far as their record shows, while the Detroit Tigers are in their third consecutive American League Championship Series. So, they meet, and it shapes up as an outstanding round of games to determine which will go to the World Series. 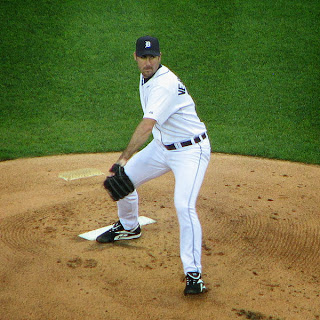 Where we went right on the Tigers is obvious. They are an outstanding collection of Major League talent guided by an accomplished field manager. They are proven winners, taking it one step at a time, first advancing to the ALCS in 2011, then winning the ALCS in 2012 and advancing to the World Series. The next step is to win the World Series, and they're taking a good whack at it.

The Tigers looked all but finished more than three games into their American League Division Series (ALDS) with the Oakland Athletics. Not only were the Tigers down, 2-1, but their bats were dead. Four innings into Game 4, the Tigers had scored in one inning of the last 30. As Game 4 progressed, the demise of the Tigers became imminent. They trailed, 3-0, going to the bottom of the fifth against Oakland right-hander Dan Straily.

But the Tigers have the hammers to hammer back, and the Athletics became a nail. Before the Tigers could make an out in the fifth, Prince Fielder singled, then Victor Martinez singled, then Jhonny Peralta homered to left. Game tied, 3-3, the Tigers were on their way. Later, Martinez homered in the seventh. Then, the Tigers began filling the bases so Austin Jackson could single in a run in the seventh and Omar Infante could double in two runs in the eighth. The Tigers won, 8-6.

And there’s Miguel Cabrera. No better hitter in the game, anywhere. In 2012, he won the Triple Crown. In 2013, he hit just as many homers (44), drove in two fewer runs (137) and batted 18 points higher (.348). All that, despite hitting only one homer since Aug. 26. He ended up winning only the batting championship -- for the third straight season.

Going to the fourth inning of Game 5, Cabrera wasn't much present in the ALDS. Just four-for-17 with an RBI. But then he put one deep against Gray with Torii Hunter aboard, a two-run homer that gave Verlander all the support he needed. The Tigers won, 3-0. They had been down 2-1, plus three runs down in Game 4, and they stormed back. And it's because they're the best team in the American League, in total, over the last three years.

So, now, they face the Red Sox, who few took seriously entering the season. The common error now is easy enough to detect.

We all remember that the Red Sox in 2011 had the AL East bagged before September, then disappeared with a 7-20 slide to blow any chance at the playoffs. Reports circulated that manager Terry Francona lost control of the team and bad actors spent games in the clubhouse with beer and fried chicken.

The Red Sox brought in Bobby Valentine as their 2012 manager, but Valentine is a rather colorful character who is a sideshow in himself, and that didn't work well, either. On Aug. 25, the Red Sox stumbled into an opportunity to re-shape their team, because the Dodgers were desperate for new players and, forecasting little to covet on the coming free agent markets, offered to take on about $275 million of contracts from the Red Sox. The Red Sox were happy to cooperate, so the Dodgers now have Adrian Gonzalez, Josh Beckett, Carl Crawford and Nick Punto. The Red Sox had flexibility.

What the Red Sox did with that flexibility didn't exactly push the big league glitzometer into the red zone. They signed Shane Victorino, Stephen Drew, Ryan Dempster, Koji Uehara and Mike Napoli as free agents. They traded for Joel Hanrahan and Mike Carp. Meanwhile, the Toronto Blue Jays appeared to be renovating dramatically in the trade market. The Baltimore Orioles became a team to take seriously. The New York Yankees and Tampa Bay Rays both faced challenges, and both had well known ways of meeting them. The Red Sox seemed to not be improved enough to reclaim the division.

As it turned out, clearing the payroll may have aided the Red Sox, but clearing the disabled list really helped the Red Sox. David Ortiz appeared in only 90 games in 2012 before an Achilles heel injury ended his season. The Red Sox gladly re-signed him for two years at $26 million. At about the time Ortiz went on the disabled list in 2012, Jacoby Ellsbury came off of it after missing three months with a shoulder injury.

That's the leadoff hitter and the cleanup hitter, almost never in the same lineup in 2012, when the Red Sox suffered through injuries and very little depth. And all of their pitchers were terrible. The Red Sox finished 12th the AL in staff ERA at 4.70 in 2012.

And the pitching improved, with Jon Lester and Clay Buchholz both considerably bettering their 2012 performances, while Uehara anchored a bullpen that had been compromised by injuries to Hanrahan and Andrew Bailey. The Red Sox improved to sixth in AL ERA at 3.79.

Except for a couple of weeks in May and a handful of days in July, the Red Sox spent the entire season leading the AL East. And there was never any doubt during their ALCS, in which they took only four games to eliminate the Tampa Bay Rays.

So, it's on now between the Tigers and the Red Sox. The Tigers, making their third straight trip to the ALCS, are the most consistent AL club of the last three years. The Red Sox, who claim the best AL record in 2013 at 97-65, have been the best AL club this year.

The present meets the persistent. That's always a good competition.