The Boston Red Sox don't need any help scoring runs, but the Tampa Bay Rays have been helping them, anyway. The Rays entered their American League Division Series with the Red Sox on a roll, but now they're down, 2-0, and they appear to be flat-out doomed. 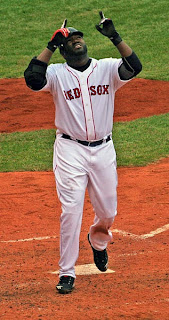 David Ortiz of the Boston Red Sox might be the most dangerous hitter in the game, and the Tampa Bay Rays know it (Toasterb/Creative Commons Attribution-Share Alike 3.0 Unported license).

Winning three straight elimination games to get there, The Tampa Bay Rays entered their American League Division Series (ALDS) with the Boston Red Sox appearing as the proverbial Team of Destiny.

After losing the opener, 12-2, Friday in Fenway Park, they looked a little different.

And after losing Saturday’s Game 2, 7-4, they look finished.

The look changed on Friday, when the Rays played an absolutely terrible Game 1. Checking the box score, they made no errors. Watching the game, they made errors every place you looked.

Through the course of the season, a team's fortunes will wax and wane, and there's always a temptation to view the streaking team as the one that's going all the way, until that team loses, at which point it becomes tempting to say that team is doomed.

The Red Sox hit up and down their lineup and consistently make opponents pay for their misplays. The Rays gave them plenty to work with in Game 1.

Those looking for turning points are putting goat horns on Rays right fielder Wil Myers, who misplayed a warning track fly ball by David Ortiz into a double that opened up a five-run fifth inning for the Red Sox. In truth, the whole team was awful. Myers was merely the first guy who was awful, and the line behind him grew quickly.

Baseball, being a game of discrete, isolable events, has a unique concept of teamwork among the team sports that players describe as picking each other up. One hears players talk about it all the time -- "I botched this play, but so-and-so picked me up." When someone makes a bad play, someone else comes along and makes a good play, which redresses the sequence of events to keep the bad play from damaging the team.

The Rays didn't have it working in Friday's fifth inning. After the misplay by Myers, pitcher Matt Moore didn't cover first base energetically enough, then left fielder Sean Rodriguez misplayed a ball off the Big Green Monster, then catcher Jose Lobaton didn't catch strike three. The Rays had many chances to put a lid on that inning, and they just didn't do it. So, don't pin the five-run inning on Myers. It was a team effort.

In particular, it's hard to watch Moore allow the Myers misplay to blow up into a big inning by making a misplay of his own. For a pitcher who was 17-4 this year, Moore wasn't much of a horse in this one. That's a situation in which the pitcher absolutely has to pick his guy up. Maybe, in a dysfunctional office, someone might say, "It's fine for me to screw this up now, because all the blame will go to the guy who made the mistake that started all this." But there's no place for it on a championship baseball team, so when Moore didn't run all the way through the bag on Scott Drew's ground ball to first baseman James Loney, one had to wonder what was in store for the Rays for the rest of the game.

In fact, a run scored on that play, giving the Red Sox a 3-2 lead, and the Red Sox scored nine more runs to polish off a 12-2 win.

The series moves back to the Tampa Bay Monday for Game 3, an elimination scenario for the Rays. Playing to stay alive has been the tonic for the Rays for the last week. But their ailment now is more serious than it has been. They have to do it against the Red Sox, the American League East champions -- three straight times.