Contrary to what's often spoken in Little League, and certain analytical circles, a walk is not as good as a hit. At least, that was the frame of mind Detroit Tigers pitcher Anibal Sanchez took into Game 1 of the American League Championship Series against the Boston Red Sox. He struck out 12 in six innings, and the Tigers almost tossed a combined no-hitter in a 1-0 win. 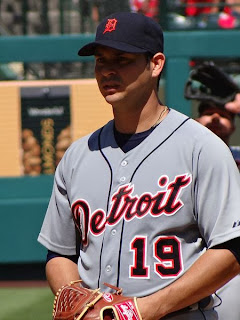 Detroit Tigers pitcher Anibal Sanchez made an interesting remark to Fox reporter Ken Rosenthal after the Tigers produced remarkable work from the mound in their 1-0 victory against the Boston Red Sox Saturday night at Fenway Park.

The win gave Detroit a 1-0 lead in the American League Championship Series (ALCS). Five Detroit pitchers worked a no-hitter until there was one out in the ninth inning. Red Sox batters struck out 17 times and wound up with only one hit.

Sanchez pitched the first six innings, striking out 12 and walking six. And this is where Sanchez was interesting. He told Rosenthal that he didn't worry so much about walking the Boston hitters. His plan was to stay on the edges and the corners, keep the ball out of the fat and see what happened.

Typically, this is not considered a sound strategy. Walks will haunt, right? The Red Sox walked 581 times in 2013, second most in the American League. The Red Sox are known for it. They grind out their at-bats. When we hear people talking about grinders in the game, they're usually talking about the Red Sox.

But the Red Sox also are known for destroying pitches. They slugged .446 in the AL this season, the top figure in the league. They don't homer so much, but they led the league in hits (1,566) and doubles (363).

And it's not like the Red Sox gave Sanchez a lot of help by swinging at pitches outside of the zone on three-ball counts. Of five 3-1 pitches, the Red Sox only swung and missed at one, while all the others resulted in walks. On his three 3-2 pitches, Sanchez got two swinging strikes and he walked one batter.

Sanchez paid for his strategy with a lot of deep counts. Through six innings, he tossed 116 pitches, which was a good reason for Tigers manager Jim Leyland to remove him from the game. By then, the first seven Red Sox hitters all had batted three times, and they were starting to flail. In the next two innings, Detroit relievers Al Alburquerque, Jose Veras and Drew Smyly struck out four hitters.

Red Sox fans almost were beside themselves when Daniel Nava finally produced a hit against Detroit reliever Joaquin Benoit with one out in the ninth. The game was still a going concern. But Benoit ended it with an easy fly ball and a pop up.

It should be noted, as a crucial subplot, that the Tigers weren't lighting up the scoreboard, either. After their very slow start in the American League Division Series against the Oakland Athletics, the Tigers finally started to hit in Game 4 of that series, and they cranked out nine hits to go with three walks in Game 1 against the Reds Sox. It remains that in five playoff games now, the Tigers have scored in three different innings only once, and three times they have scored in only one inning.

But their pitching really is out there. Remember that Justin Verlander had a no-hitter into the seventh inning of Game 5 against Oakland. So, the Tigers have flirted with no-hitters twice in a row, and they have allowed no runs on four hits in their last 18 innings of work against playoff competition.

Scherzer is likely to try blowing the ball through the Red Sox, because that's how he does it. But it will be interesting to see if he follows the Sanchez strategy to any extent. After all, it worked pretty well for Sanchez.