On a day when hitting conditions in St. Louis were all but impossible, every base counts. The Dodgers gave up a key base on a passed ball, enabling Michael Wacha to outduel Clayton Kershaw in a 1-0 game, helping the St. Louis Cardinals to a 2-0 lead in the National League Championship Series. 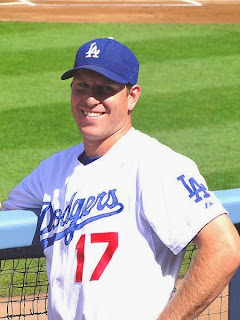 A.J. Ellis is a beloved Dodger, but his passed ball Saturday really hurt them in a 1-0 loss to the St. Louis Cardinals in Game 2 of the National League Championship Series (Cbl62/Creative Commons Attribution-Share Alike 3.0 Unported license).

Game 2 of the National League Championship Series (NLCS) in St. Louis truly was a game of shadows, which isn't to reference Barry Bonds or his inspiration, Mark McGwire, who was much more successful as a St. Louis Cardinals hitter in 1998 than as the Dodgers hitting coach on Saturday afternoon.

Rather, it is to reference shadows, which, combined with two excellent starting pitchers, made hitting a very challenging job. Presumably, and for many of the same reasons, it also made catching difficult. But that doesn't explain how the only run scored in the Cardinals' 1-0 win against the Dodgers.

David Freese led off the fifth inning for St. Louis Saturday with a double and Matt Adams came to the plate. Ellis set up toward the right-handed batters box waiting for a 1-0 pitch from Clayton Kershaw. One suspects Ellis was looking for a fastball down and away from the left-handed hitter. It was a fastball down over the inner half of the plate. Ellis stabbed at it across his body, the ball glancing off his glove and rolling towards the backstop. Freese took third base.

It the rough and tumble of pitch after pitch, the catcher won't get all of them. Ellis had six passed balls in 113 games behind the plate this year, to go with 45 wild pitches, which he might have blocked but still are assessed to the pitcher.

But on a day when no one was hitting, every free base matters, especially if that free base is third base with less than two out. After Kershaw struck out Adams, John Jay hit a fly ball to medium left field. With Carl Crawford in left field for the Dodgers, they're not stopping Freese, or anyone else. Crawford made the catch, but his throw didn't even challenge Freese.

Cardinals right-hander Michael Wacha is 22 and he has taken only 11 Major League starts, playoffs included, but he's coming on strong. He held the Dodgers to five hits in 6 1/3 innings Saturday. In two postseason starts, he has allowed seven hits and struck out 17. In his last start of the regular season, he didn't allow the Washington Nationals a hit until there were two out in the ninth.

Kershaw is Kershaw, the best left-hander going, but the Cardinals beat him in all three of his starts against him this season. And the Dodgers don't always support him offensively. Kershaw, 16-9, took five losses in quality starts this year, and another five quality starts were wasted in Dodger losses.

The playoffs have been quite a bit the same. Kershaw has allowed one earned run in 19 postseason innings, and he has one win and a loss to show for it. The win came in the Dodgers' 6-1 victory over the Atlanta Braves in Game 1 of the National League Division Series, the only game in which he allowed an earned run.

All season long, the Cardinals were outstanding with runners in scoring position and two outs, batting .305 with an .821 OPS, well above the National League averages of .226 and .673. The Cardinals led the league in both categories. The Dodgers weren't bad, hitting .247 with a .683 OPS. In this series, the Cardinals are one-for-four, and the Dodgers are one-for-seven.

The hitting conditions Saturday, for much of the game, had to be all but impossible. Busch Stadium is built to cast two shadows because there is a space between the roof of the upper deck and the main stadium structure. One could see the pitches coming from light in the batters eye, then through a shadow, then through another patch of light, then into another shadow. Any pitcher who could dance a little worked with a firm advantage.

The Dodgers also went to this game without Hanley Ramirez, who couldn't go because a Joe Kelly pitch that hit him in the ribs Friday got him pretty good, and Andre Ethier, who returned to full-time action Friday in a 13-inning game. So, the Dodgers were facing a hot pitcher throwing through two shadows, and their lineup missed its four and five hitters.

The Cardinals knew what they were doing. In the Dodgers sixth, Kershaw led off with a single, then Crawford hit a ground ball to second baseman Matt Carpenter, who played it into right field and well over towards first base. Carpenter tried for the force at second on Kershaw and threw wildly, allowing Kershaw to take third and Crawford to take second. But Mark Ellis popped up. Then, the Cardinals took a chance.

They walked Adrian Gonzalez, loading the bases for Puig and Uribe with one out. Puig struck out, swinging at a 3-2 fastball down and away, well out of the strike zone. Then Uribe struck out on four pitches, missing strike three.

The series goes now to Dodger Stadium, and the Dodgers know they can't win the series at home even if they take all three games there. They're in a tough spot. But the NLCS is best-of-seven for a reason. The Dodgers will try to make those reasons matter.